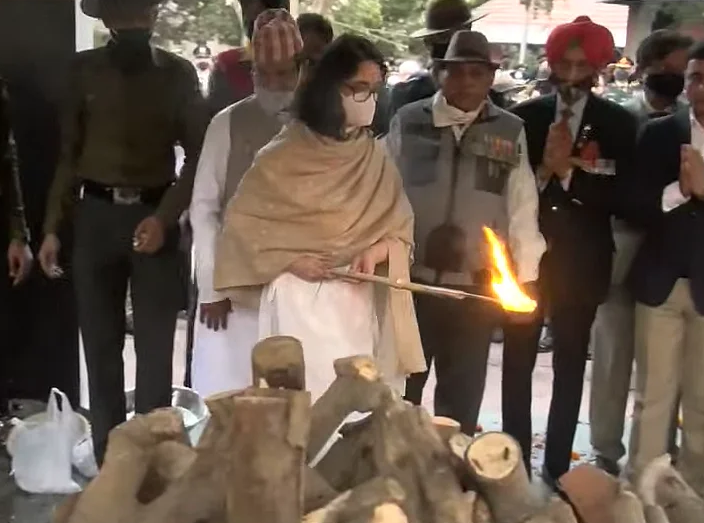 New Delhi: As condolences continued to pour in from across the world over Gen Bipin Rawat’s demise, a number of foreign military commanders, envoys and defence attaches Friday bade farewell to India’s first Chief of Defence Staff at the Brar Square crematorium.

Gen Rawat and his wife Madhulika Rawat were cremated with full military honours, two days after they were killed along with 11 other armed forces personnel in a tragic helicopter crash near Coonoor in Tamil Nadu.

In his roles as the Army Chief and the Chief of Defence Staff, the four-star General had consistently pushed for the expansion of India’s military diplomacy to boost defence cooperation with like-minded countries, including those in the neighbourhood.

After the news of Gen Rawat’s demise went public Wednesday, both Russia and the US, seen as rivals, were quick to react to his untimely death while acknowledging his role as a fine military commander.

While condolence messages came from the heads of state and governments of Bhutan, Israel, Maldives, Mauritius and Sri Lanka, the foreign and defence ministers of a sizeable number of countries also expressed grief at Gen Rawat’s demise.

The condolence messages at the level of foreign ministers came from several countries, including the US, Bhutan, Czech Republic, Japan, Maldives, Oman, Serbia, Sri Lanka and Venezuela.

Similar messages were also sent by defence ministers of Australia, Canada, the Czech Republic, the European Union, Israel, Latvia, Maldives, Pakistan, Sri Lanka, the UK and the US.

“As India’s first Chief of Defence Staff, General Rawat spearheaded a historic period of transformation in the Indian military,” a statement by the US embassy said.

US Secretary of State Antony Blinken said Gen Rawat was a “strong leader and advocate for India, and his passing is a great loss for both of our nations.”

Russian envoy Nikolay Kudashev said Moscow has lost a very close friend who played a big role in the promotion of the India-Russia special and privileged strategic partnership.

“Grieving together with India. Goodbye, friend! Farewell, commander!” he tweeted.

January 1 last year, Gen Rawat took charge as India’s first CDS with a mandate to bring in convergence in the functioning of the Army, the Navy and the Indian Air Force and bolster the country’s overall military prowess.

Another key mandate of the CDS was to facilitate the restructuring of military commands for optimal utilisation of resources by bringing about jointness in operations, including through the establishment of theatre commands.

In the last two years, Gen Rawat carried out the extensive groundwork to roll out tri-services reforms.

Known to be forthright, fearless, and blunt at times, the outstanding military commander ruffled many feathers with his controversial remarks during his tenure as the Army Chief as well as Chief of Defence Staff.

In his role as the Army Chief between 2016 and 2019, he strongly backed a policy of hot pursuit in dealing with cross-border terrorism and militancy in Jammu and Kashmir.