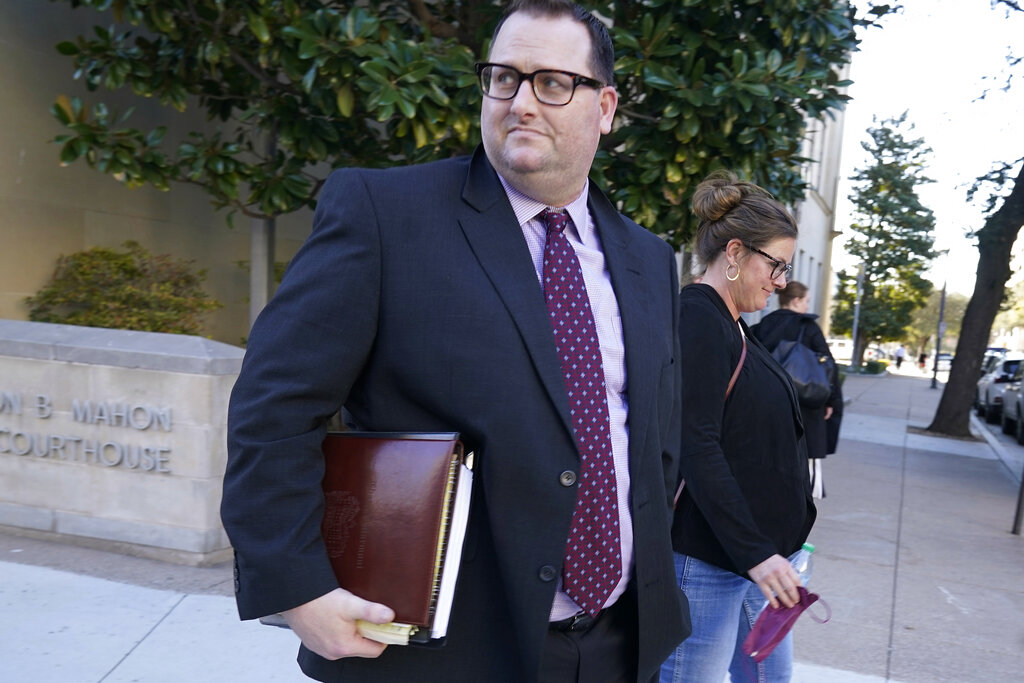 UPDATED with sentencing: Eric Kay, the Los Angeles Angels communication director who earlier this year was convicted of distributing a controlled substance that caused the death of pitcher Tyler Skaggs in 2019, was sentenced to 22 years in federal prison Tuesday.

The minimum sentence was for 20 years, but Senior U.S. District Judge Terry R. Means added two years because of a lack of remorse from Kay, who was found to have given Skaggs fentanyl the night of his death in a Texas hotel. The pitcher was 27 years old.

Kay’s sentencing came after prosecutors detailed his lack of remorse, including jailhouse calls and emails that, per the U.S. Attorney for the Northern District of Texas, saw Kay insult Skaggs and his family.

He also called the Skaggs family “dumb” and “white trash,” adding, “All they see are dollar signs.” Then, “They may get more money with him dead than he was playing because he sucked.”

He also called the jurors who convicted him in February “fat, sloppy, toothless and unemployed.”

The jury turned in its verdict within three hours of beginning deliberations this morning. Kay was immediately taken into custody.

“We’re obviously disappointed in the verdict. We thought there were many reasons to doubt the government’s case,” said Reagan Wynn, one of Kay’s attorneys. “This is a tragedy all the way around. Eric Kay is getting ready to do minimum 20 years in a federal penitentiary and it goes up from there. And Tyler Skaggs is gone.”

Kay’s sentencing is set for June 28.

“This case is a sober reminder: Fentanyl kills. Anyone who deals fentanyl – whether on the streets or out of a world-famous baseball stadium – puts his or her buyers at risk. No one is immune from this deadly drug,” US Attorney Chad E. Meacham said in a statement.

Kay and Skaggs were intimately involved in drug use after meeting in 2017 with the Angel, sharing subtances together, sometimes in the Angels clubhouse. Skaggs purportedly connected at least four other Angels players with Kay for oxycodone tablets.

Skaggs died sometime between the night of June 30, 2019 and July 1, 2019. He was found in his Texas hotel room before a series with the Texas Rangers in Arlington. A medical exam found that he died from “mixed ethanol, fentanyl and oxycodone intoxication” that led to choking on his vomit. The trial was to determine whether Kay had provided him with the drugs that killed him.

During the seven days of Kay’s trial, the government tried to establish that no one but Kay could have given Skaggs the pills that killed him, and that the transaction took place in Texas.

Pitchers Matt Harvey, Mike Morin and Cam Bedrosian and first baseman C.J. Cron testified in the trial. All said Kay helped them obtain drugs. They played for the Angels during the years federal prosecutors say Kay obtained drugs for players. Only Cron is currently on a Major League Baseball roster.

Of all the player testimonies, Harvey’s was the most shocking. A former starting pitcher in the MLB All-Star game, Harvey admitted under immunity that he had used cocaine while starring with the New York Mets. Subsequent injuries to his arm and shoulder led to him becoming a journeyman player, and Harvey admitted his testimony in the Kay trial could hamper him from resuming a baseball career.