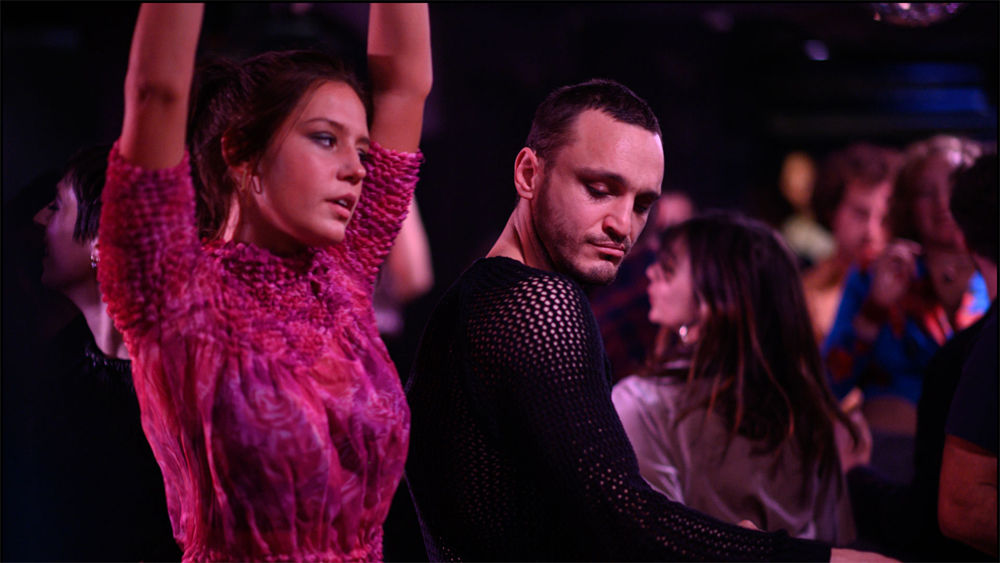 Ira Sachs’ latest film centers on a three-way relationship between two men and a woman as they navigate their way through love, lust and heartbreak.

Passages begins on a film set. Tomas (Franz Rogowski), a German man in Paris, is directing a period piece. On set, he’s a hardass, always yelling, screaming and nitpicking about small things. After shooting, he goes to the film wrap party with his husband Martin (Ben Whishaw), but he is less than enthusiastic about the event, so he leaves the forlorn Tomas alone to dance with Agathe (Adèle Exarchopoulos). The two head to another party, and without any indication that they even like each other, they have sex. Maybe it’s the first time he’s had sex with a woman, and he tells his husband about it as if he is supposed to be happy for him? Of course, this starts an argument between the two, which leads to Martin walking out.

Tomas really wants his husband to be OK with this new arrangement and even wants him to help him feel better about the situation. Martin begins sleeping with Ahmad (Erwan Kepoa Falé), and when Tomas finds out, he’s upset. What did he expect Martin to do? Now that he knows Martin has moved on, he aims to try to get his husband back while keeping Agathe by any means necessary.

One thing that kept running through my head while watching Passages is, “This movie can’t be serious.” In one scene, Tomas says, “Martin says I can be terribly self-involved.” Wow, no kidding. You treat your husband like crap by cheating and making him accept it, then he gets with Agathe and now she’s getting the short end of the stick, and Tomas wants them both to accept his shenanigans? He is forcing his lover and his husband into a polyamorous affair that none of them is ready for, and the back-and-forth is causing hurtful confusion between two people who love him, and it’s just not fair. People like Tomas can’t make meaningful connections for love, or friendship, because we never see him interacting with anyone except Martin and Agathe. There is a high level of delusion this character carries that makes him unintentionally hilarious because he really thinks everything is going to be OK with the mess he created.

Sachs and Zacharias’ script makes some odd choices. The film is desperate to come off as a sexual drama, but it’s devoid of sensuality as the sex scenes are awkward and overstay their welcome, leaving nothing to imagination. Also, why are French people speaking English to one another? There is a scene where Agathe is at an evening dinner speaking English. Everyone has a French accent, but they aren’t using the local language, and it’s a scene neither Whishaw nor Rogowski is in. The most troublesome aspect here is perpetuation of the idea that bisexuality is chaotic and often ruins people’s lives because they don’t know what they want.

Martin, Tomas and Agathe take themselves so seriously that I think what the result would’ve been if the film was a flat-out comedy. Passages does have some funny moments, but it doesn’t feel like the audience is laughing with the characters, as opposed to laughing at them. Especially in their moments of weakness because their decisions seems so outrageous, it is hard not to have a nervous chuckle or two.

There is a great scene toward the end between Martin and Agathe as sit at a restaurant and finally begin to come to their senses. They have a conversation about the ways in which they connect to Tomas.

Martin has a kind and welcoming demeanor that, in turn, makes Agathe relax and have a heart-to-heart about the next steps in the relationship. There is more love and tenderness between the two of them than they ever had with The man they claim to love.

At the end, Tomas is walking through the hallways of an elementary school and is surrounded by children because that is exactly how he behaves — like a spoiled, bratty child. He’s caused enough heartbreak, and now it’s time to grow up. This character is one of the most annoying I’ve encountered in a long time. The story is wacky, out of control and frustrating, but it’s still good, maintaining and nice pace and is never boring.

I wanted to scream and throw things at the screen, but I guess that’s part of the allure of Passages.