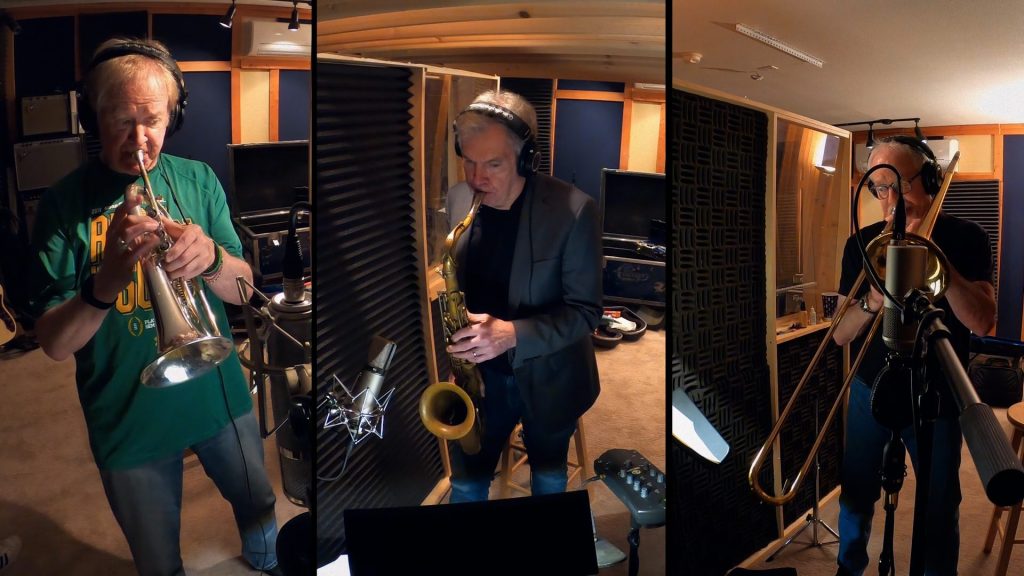 EXCLUSIVE: Gravitas Ventures has acquired North American right to Genevieve Adams’ dramedy Simchas and Sorrows, along with worldwide rights to Peter Curtis Pardini’s doc The Last Band on Stage, and North American rights to Jaclyn Bethany’s queer thriller, The Falling World. The Anthem Sports & Entertainment Company will release the former title at the Laemmle Soho in Los Angeles on September 16, and on all major digital and VOD platforms on the 20th. Pardini’s film will hit VOD and theaters in three cities on September 30, with Bethany’s indie unspooling on VOD on October 18.

Narrated by Joe Mantegna, The Last Band on Stage opens on March 14, 2020, with the iconic rock band Chicago becoming the last playing in the U.S. as Covid lockdown begins. The doc goes on to tell the incredible story of how the 55-year-old band survived a pandemic that stopped the world in its tracks.

The film that doctor-turned-actor-turned-filmmaker Lakshmi Devy helmed for FiDi Talkies centers around an Indian American woman (Devy) who finds happiness through her work as a documentarian and spending time with friends in her hometown in India. Trapped in an abusive relationship with her lover, albeit more emotionally than physically, she finds it difficult to accept that it is abuse. An unfortunate incident shakes her to the core, making her think about the relationship and finally take a call regarding her self-respect. The message is clear – every 16 minutes, a woman is raped in India – with the film acting as a societal reminder that it is not the woman but the man who ultimately loses his honor because of this act.

Devy directed from her script. The film also stars Adith Arun, Naveen George Thomas, Shreya Navile and Vignesh Shivasubramaniam. In light of the current Roe V. Wade overturn, for every iTunes rental over the next three months, a portion of the pic’s profits will be donated to Planned Parenthood. View the trailer below.

EXCLUSIVE: Filmmaker and comic book writer Matteo Pizzolo has entered into a multi-picture distribution deal with Cinedigm. The partnership will launch with a remastered edition of his animated film Godkiller, which was originally released by Warner Bros. in 2011 and gained new notoriety last year off the success of his comic book series relaunch Godkiller: Tomorrow’s Ashes for Black Mask Studios.

The Godkiller film was based on Pizzolo’s beloved graphic novel series that he began self-publishing in 2008. It’s billed as the dark-fantasy tale of a strange crew of adventurers campaigning through a post-nuke wasteland in search of a new heart for a dying girl.

Pizzolo is currently at work on a video game adaptation of Godkiller for which The Boys‘ Aya Cash will voice Bones, an anti-hero sorcerer who survives her world’s descent into dystopia and leads a vendetta against the cruel men and strange deities responsible for the end of the world. The project leading a new gaming initiative at Black Mask Entertainment will be produced by Daytime Emmy winner Brian Giberson (Power On: The Story of Xbox). Also coming up for Pizzolo is Rogue State, a new comic book series about a near future army of young vigilantes resisting a paramilitary police state after the Supreme Court rules that militias are constitutionally protected.

Pizzolo is represented by WME and TFC Management; Cash by UTA and Industry Entertainment.

EXCLUSIVE: Vertical Entertainment has secured rights to writer-director William Mark McCullough’s horror A Savannah Haunting for North America, the UK and Ireland, with plans to release the film in theaters and on digital on October 28.

Shot on location at the haunted house that inspired the script, A Savannah Haunting is said to be based on real supernatural experiences that McCullough and his family endured in their Georgia home for decades. The filmmaker’s first feature follows members of the Rancourt family, who move to Savannah, Georgia to distance themselves from the brutal memory of their daughter’s tragic drowning in the pool at their prior home. Wracked with guilt, the mother begins to experience chilling supernatural phenomena that leads her to believe she is being haunted by her dead daughter. With sinister forces dwelling beneath the house, the family’s ties and sanity begin to unravel as the haunting turns each of them against the other. An African American family with roots in Savannah’s Voodoo past attempts to save the Rancourts before the evil in the home destroys them.

EXCLUSIVE: Freestyle Digital Media has secured North American rights to the genre-bending comedy Lisa Mania, which Shaun Vivaris directed from his own script, in his feature debut. The digital film distribution division of Byron Allen’s Allen Media Group plans to release the pic across VOD platforms on August 23.

Lisa Mania tells the story of Dom (Tenzin Dondhup), a real estate businessman in a mid-life crisis seeking marriage advice, who is led down a rabbit-hole of drug-fueled paranoia that threatens his mind, heart and groin. On the day his wife, Lisa (Kelly Donahue), is flying out to London to close a merger between their company and the larger firm, Dom heads to see his old friend and shrink, Jorge (Carlos Flores), to voice his suspicions that Lisa may be planning to leave him. With mounting evidence of infidelity, a cocktail of drugs, and a Succubus demon in the mix, Dom’s problems seem only to worsen by the minute.

Minji Chang and Olivia Day also star in the film, which Sultan Pirzhan Uulu and Kristin Nomura produced, with Glen Vivaris and Mark Jerome Cruz serving as EPs. Freestyle Digital Media negotiated the deal to acquire it directly with Glen Reynolds of Circus Road Films. Watch the trailer for the comedy below.

EXCLUSIVE: Producers Jeff Wincott and Charlotte Wincott of Hollow Metropolis Films have announced that their addiction documentary Fall Fight Shine will be released across digital platforms on August 1st.

The film features the recovery story of Wincott—a Canadian martial arts film actor who, by the age of 41, had starred in series like Night Heat and appeared in a dozen films, before overdosing off of Sunset Boulevard in Los Angeles. Wincott entered treatment and has since been in recovery, reinventing his career with appearances in assorted films and TV series.

Director and neuroscientist Charlotte Wincott collaborated with numerous addiction experts to tell the scientific stories that comprise Fall Fight Shine, which is her first documentary. They explain the biology underlying addiction, as well as the challenges and pathways to recovery.

Dr. Wincott, who studied neuroscience at NYU and conducted research in addiction at The Rockefeller University, started making films several years ago to tell relatable stories with scientific themes. Watch the trailer for her first feature below.

EXCLUSIVE: Writer-director Erik Bernard and producer Courtney LeMarco of TLG Motion Pictures have closed a deal with 1091 Pictures for the digital release of their film, Free Dead or Alive. The Chicken Soup for the Soul Entertainment company has slated it for release across all major platforms on August 9.

The deal was negotiated by Maurice on behalf of 1091 Pictures and by Max Czertok of Iuvit Media Sales on behalf of TLG.

Foxwood’s debut feature follows Lily Pierce (Kunz) in her attempt to strike back at the medieval creature that’s haunted her family for generations. In order to do so, she must reconnect with her estranged father, Gregory (Sommers), a disgraced history professor, and learn how to draw upon a time of steel and blade when armor-clad knights rode out and dueled monsters to the death. Estes rounds out the family as Lily’s mother, Silvia.

Foxwood directed from his own script and is exec producing alongside E.B. Foxwood for New Mythology Productions, with Patrick R Young and Powell Robinson producing under their Big Bad Film banner. Kunz is repped by Trademark Talent, TalentWorks and Myman Greenspan; Sommers by ADS Management; and Estes by TCA and Cinterra Entertainment.

EXCLUSIVE: Sarah T. Schwab and Brian Long, principals of the New-York based production company Cardinal Flix, have announced that their drama A Stage of Twilight, starring Karen Allen (Raiders of the Lost Ark) and William Sadler (The Shawshank Redemption), will make its world premiere at the Woods Hole Film Festival in Woods Hole, MA on August 6 at 7:30 p.m. The film is set to screen at several other festivals later in the year and is slated for release in 2023.

A Stage of Twilight centers on Cora (Allen) and Barry (Sadler), a retired couple who are enjoying life in their 70s when the latter receives dire news about his health, prompting a challenging decision for them both. His hope for a dignified death proves to be a dispiriting struggle for Cora, especially when Joey (Marlon Quijije), a 17-year-old neighbor who acts as a surrogate son to the childless couple, enters the picture.

Alfredo Narciso, Alexander Flores, Yetta Gottesman and Emily Kratter round out the cast of the indie, written and directed by Schwab. Watch the trailer below.

The film marking the feature directorial debut of Drew and Nate Garcia follows California surfer Leah (Rose), who must relocate to the small town of Carterville, where she bands together fellow misfits Marshy and Tessa to track down the town’s mythic treasure. When the trio uncovers the truth behind the treasure’s Halloween curse, they must outsmart the high school troublemakers before an evil spirit is accidentally released. Additional cast set for the pic includes Kim Sandwich, Cooper Tomlinson, Zephaniah Terry and Sam Coffelt.

Harris Kauffman wrote the script for Treasure Trackers, from a story by David Altman, and the duo of Edward Nakfoor & Howard Weinberger. The film slated for release in 2023 is produced by Storyboard’s Jason Potash, Paul Finkel, Ricky Blumenstein and Kauffman. Its casting directors Alan Luna and Natalie Ballesteros are co-producers.