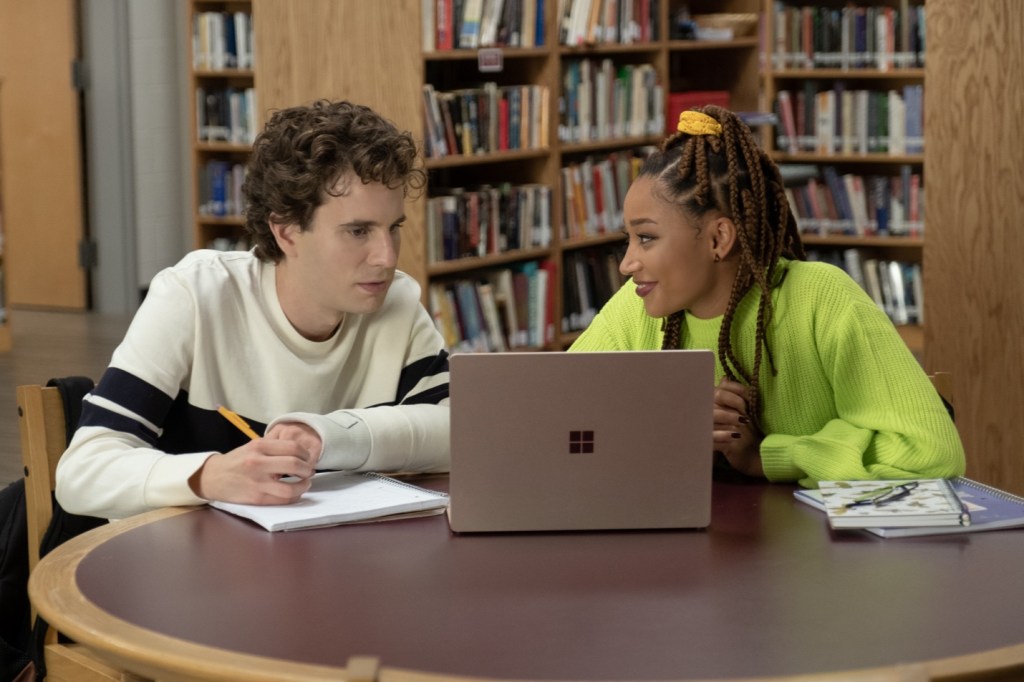 A column chronicling events and conversations on the awards circuit.

As the long-delayed Tony Awards signal the return of Broadway Sunday night, the reinvigorated musical invasion of Hollywood continues with the Stephen Chbosky screen adaptation of the multiple Tony Award-winning hit Dear Evan Hansen, the sole new wide release. That release follows by a week Amazon’s global streaming debut (and in some theaters) of the hit British musical Everybody’s Talking About Jamie.

Both focus on the trials and tribulations of teenagers in age of social media, and both rather quickly made the path from stage success to the movies (even as their stage productions are still in motion), an indication of a healthy appetite out there for the revival of movie musicals, a genre that has had its ups and downs since the MGM golden age when they were churned out almost weekly in order to help people forget tough times.

It is interesting to note that there are probably more musicals coming down the pike this year than any other in recent history. Whether that has anything to do with studios trying to predict the mood of the public in light of the last couple of years is anyone’s guess.

Some of it is coincidental caused by delays due to the pandemic. However much of it I would say is due to the success of movies like the 2016 Oscar winning La La Land which became a hit with younger audiences, as well as older and especially awards voters who viewed it as a true original in a sea of Marvel superhero movies. The overwhelming success of Hamilton (which just won an Emmy for a filmed version of the stage play after first being planned as a theatrical release) probably just adds to the renewed appeal of the genre.

Whatever the reason, this nascent awards season looks set to being a tsunami of musicals of all stripes that could figure heavily in the Oscar race.

That list is led of course by Steven Spielberg’s long-awaited and pandemic-delayed remake of West Side Story which finally hits screens this December after having been originally slotted to debut in December of 2020. Its new debut is more symmetrical, coming as it does virtually 60 years to the day after the Robert Wise and Jerome Robbins directed version of the Leonard Bernstein/Stephen Sondheim classic debuted. That classic was destined to make Oscar history by becoming the most-honored movie musical of all time with 10 Academy Awards including Best Picture of 1961. West Side Story could further make history by seeing its remake do the same thing. On the basis of its pretty impressive trailer, Spielberg’s first-ever foray into the world of musicals looks promising. But it has lots of competition, even in the same genre.

Joe Wright has also made his first film in the musical format with a dazzling version of the Off-Broadway musical retelling of Cyrano de Bergerac. Peter Dinklage splendidly takes on the title role.

Cyrano premiered in Telluride at the beginning of the month but the MGM project (now part of that studio’s musical legacy) is due in theaters until the end of the year. It should have strong Academy appeal.

The same holiday period will also bring another musical enterprise, the adaptation of Jonathan Larsen’s (Rent) Off-Broadway Tick, Tick…Boom from Netflix. TAhe film marks the feature directorial debut of Lin-Manuel Miranda and stars Andrew Garfield. It will open the AFI Film Festival in Hollywood in November.

Miranda, considered the savior of Broadway, has been having quite a year, even if the film version of his first Tony-winning Broadway success In the Heights was something of a box office disappointment when it opened day and date with HBO Max in June. The streaming conundrum that has affected all Warner Bros. movies this year might have been part of the cause, but Heights  was critically-hailed and certainly delivered the high energy of the original show to the big screen.

Miranda also has a boatload of songs in two big animated films this year, including Netflix’s Vivo which Sony Animation turned over to the streamer for its summer debut, and the upcoming holiday release of Disney’s Encanto which gets a month-long run in theaters before hitting Disney+. He could have a couple of Oscar nominated songs from all this activity. I particularly love “Inside Your Heart,” the collaboration between Miranda and Gloria Estefan that she sings in Vivo.

And speaking of animated musicals, Universal and Illumination have a surefire contender with Sing 2, the sequel to their animated hit Sing. The film boasts a lot of covers of popular tunes, but may have a surprise or two in store in terms of a high-profile original song.

Annette  debuted at Cannes, winning Best Director for Leos Carax, and is streaming on Amazon. The film brought Ron and Russell Mael’s (aka Sparks) dream of writing a film musical to fruition. They could also find themselves in the Oscar race with a song or two, particularly “So May We Start” which so effectively opens the offbeat film with Adam Driver and Marion Cotillard.

Amazon seems to really be betting big on musicals these days. It has Annette, Everybody’s Talking About Jamie, and even the lively Camille Cabello-starring version of Cinderella (from director Kay Cannon of Pitch Perfect fame) which it bought from Sony. Whether any of them puts Amazon into the Oscar race remains to be seen.

Even lively musical documentaries are trying gain a foothold in the Oscar contest. Searchlight’s Summer of Soul and Lionsgate’s The Jesus Music from faith-based filmmakers the Erwin brothers open next week.

Of course, musicals can be a risky bet. Cats, anyone? A Chorus Line, anyone? (Actually a new film version of the latter 1985 film is planned by Ryan Murphy, who hopes to erase memories of the unfortunate Michael Douglas-starring version).

Currently the songwriting team of Benj Pasek and Justin Paul is riding high. They have Oscars for La La Land,  which they followed with another musical smash, The Greatest Showman. The Hugh Jackman-fronted project started off slowly at the box office and with curmudgeonly critics, but it gained tremendous steam, eventually grossing over $430 million worldwide. The public spoke on that one, and the duo clearly hopes the public will do the same for the aforementioned Dear Evan Hansen.

They won Tonys for that show’s Broadway run and could find themselves in the Oscar race again with an original song “The Anonymous Ones” written for the movie with co-star Amandla Stenberg who sings it in the film which — inexplicably if you ask me — has drawn a chorus of haters in the critical community. They just don’t seem to get it and have made the film a target.

One of the biggest complaints from those haters is that star Ben Platt, beautifully reprising his Tony winning role as the title character, is too old to play a high school senior. Platt is 27, but employs an awkward gait and look that to my eyes makes him appear even younger than he is supposed to be in the film. Platt and this film version deserve better. My two cents. But in the end, as they did with The Greatest Showman, moviegoers will have the last word, so we’ll have to wait for their verdict. There was applause and tears at the screening I attended.

Having seen it on Broadway, and earlier this week in a theatre where the sound btw was glorious, I have to say I liked the film version even better than the acclaimed stage version. Chbosky’s decisions to go close up were wise and work well for this unique contemporary musical, dealing with issues of mental health among teens (a very timely subject right now indeed considering what is happening in the sports world and other places), teen suicide, self-doubt, and trying to own up to who you are.

It’s all done with some pretty great songs skillfully woven in, particularly the powerful “You Will Be Found” in an exhilarating version featuring most of the cast. Of course there will always be those who just don’t buy into actors breaking into song, but if you are fan of the great musicals, this one does it about as well as it can be done, at least within its own ambitions. Whether the haters succeed in bringing it down, or the public rejects it, remains to be seen, but given half a chance to be taken on its own terms, and with a terrific supporting cast including Julianne Moore and Amy Adams, Dear Evan Hansen is worth being found.

The same is true with Everybody’s Talking About Jamie which also deals with a teen dealing with the fact that he may not be just like every other kid, and taking ownership of the person — the good person — he is.

But hopefully these movies and the rest of the 2021 crop signify that musicals are back in a big way. The form has always been a valuable part of the cinematic experience. Ironically, as has been well publicized, the Golden Globes has been forced to take a time out in the one year their Best Picture Musical/Comedy category could easily be filled with musicals and give an extra boost to these films this awards season. One studio marketing executive to whom I spoke over the weekend was actually lamenting that fact, but still hoping his musical will find its way into the Oscar race without the kind of boost the Globes have given to the genre in the past.

Beyond 2021, there is a bountiful list of musicals coming in the future. They include new film versions of Guys And Dolls, The Color Purple, Little Shop of Horrors and Flower Drum Song  as well as Broadway adaptations of Mean Girls, Mathilda, 13, Carole King’s Beautiful and Wicked , among many more in various stages of development.

Even Richard Linklater is betting big on musicals and taking a whack at one, a rare Steven Sondheim flop called Merrily We Roll Along, which despite its unfortunate fate on Broadway has developed a real cult following. It reverses time for its characters, examining their relationship over the course of 20 years starting at the oldest point and moving backward. Linklater — who famously shot Boyhood over a period of 12 years — is using the same game plan, increasing his production schedule to two full decades to do it all in real time. It stars, among others, Beanie Feldstein and Ben Platt. So if the critics succeed in killing off Evan Hansen, at least Platt knows he has another musical coming out in about 20 years.

India’s Cleanest City Has No Garbage Bins, Earns Crores From Its Waste