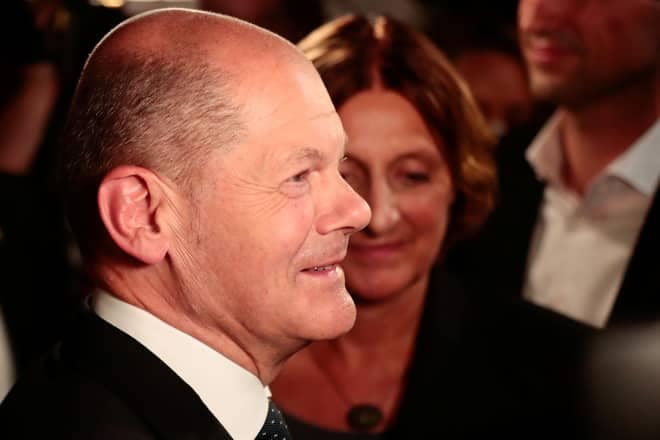 Scholz’s SPD won 25.7 percent of the vote in Sunday’s hard-fought general election, while Merkel’s centre-right CDU-CSU bloc slumped to a record-low of 24.1 percent.

“The chancellor congratulated Olaf Scholz on Monday on his election success,” the statement said.

Merkel’s would-be conservative successor Armin Laschet has yet to publicly do so.

Despite leading the conservative alliance to its worst result in its seven-decade history, the unpopular Laschet has insisted on trying to form the next German coalition government with him as chancellor.

But key conservative figures have increasingly distanced themselves from Laschet in recent days, raising doubts about his future.

Bavarian premier Markus Soeder, leader of the CSU sister party to the CDU, publicly congratulated Scholz in a press conference on Tuesday, illustrating a growing rift with Laschet.

“Olaf Scholz clearly has the better chance of becoming chancellor at the moment,” Soeder said, insisting the election result “must be accepted, it is a basic rule of democracy”.

Merkel herself is standing down after 16 years at the helm of Europe’s top economy.

But the veteran leader will stay on in a caretaker capacity until the new government is formed, expected to take weeks or even months.

With neither the SPD nor the CDU-CSU keen on teaming up again in a so-called grand coalition, the only way either can achieve a parliamentary majority is by partnering with the Greens and the pro-business FDP party.