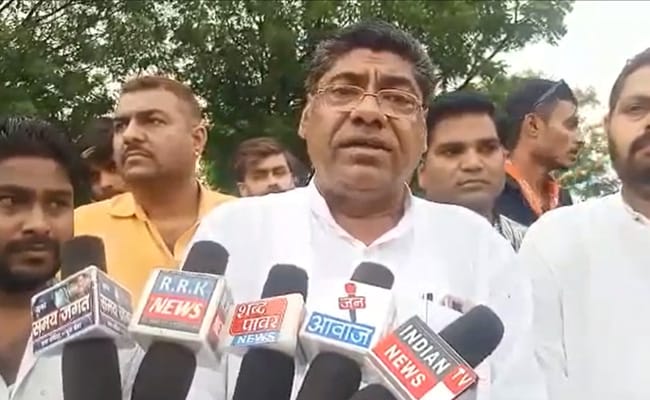 Ramratan Payal is the district unit chief of the BJP in Katni district.

A Madhya Pradesh BJP leader triggered controversy after telling a journalist who had questioned him over rising fuel prices to “go to Taliban-ruled Afghanistan”. Ramratan Payal, the district unit chief of the BJP in Katni district, slammed the journalist for asking questions about fuel prices at a time when a third wave of the coronavirus pandemic was about to hit the country.

“Go to Taliban. Petrol is being sold at ₹50/litre in Afghanistan. Go and refill your petrol there (Afghanistan), where nobody is there to refill the fuel. At least here (India) we have safety. The third wave of coronavirus is about to come while two Covid waves India has already faced,” the BJP leader was heard saying in a video that has since been widely shared.

The BJP leader, who was surrounded by his supporters – all of them without a face mask – also lectured the journalist about people not following Covid protocols.

“You are a reputed journalist. Do you even realise the kind of situation in the country. How (Narendra) Modiji is controlling the situation. He is still giving free ration to 80 crore people,” he declared.

Mr Payal made the comments on Wednesday after he participated in a tree-planting programme organised by the Bharatiya Janata Yuva Morcha, the youth arm of the BJP.

He is not the first leader from the BJP to demand that those critical of the party’s governance move to Afghanistan. A few days ago, his Bihar colleague Haribhushan Thakur asked “those who are feeling scared in India” to go to the war-torn country.

“… those who feel scared here can go there… petrol and diesel are cheaper. Once there, they will understand the value of India,” he said, taking a swipe at critics of the hike in fuel prices.

The price of petrol has crossed ₹100 a litre, while diesel rates have touched ₹90 in most states across the country. Fuel prices remained unchanged across the four metros for the 34th straight day today. However, diesel prices have been cut by up to 25 paise across the metros for the third consecutive day.

<!-- -->Japan: Besides Taro Kono and Fumio Kishida, two other candidates are women: Seiko Noda and Sanae TakaichiTokyo: Candidates to become Japan's next...
Read more
Previous articleExplainer On major cryptocurrency exchange Binance, Which Is Facing Scrutiny By Financial Regulators Across The world
Next articleChina Approves 3-Child Policy With Sops To Encourage Couples To Have More Children
LocalTakSabse Tez