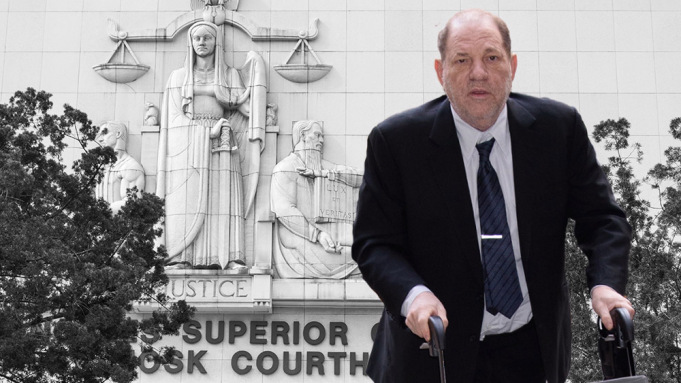 UPDATE: 11:18 AM: One day after being extradited to L.A. to face rape charges that could see him behind bars for up to 140 years if found guilty, Harvey Weinstein made his first court appearance in the West Coast case this morning.

Already a convicted sex offender due to the successful prosecution last year in New York, the once time movie mogul entered a plea of “not guilty.” With his lawyer Mark Werksman by his side, a shackled and virtually silent Weinstein entered the Los Angeles Superior Court in a wheelchair on Wednesday.

The only words uttered by Weinstein was a “thank you very much” after Judge Sergio Tapia wished the disgraced producer “good luck.”

The April indictment of Weinstein was unsealed today, laying out the full extent of the four counts each of forcible rape and forcible oral copulation, two counts of sexual battery by restraint and one count of sexual penetration by use of force that he has been charged with. The attacks involve five women over a span ranging from 2004 to 2013.

Also during the brief hearing, Werksman told Judge STapia he would contest the 11 counts from L.A. DA George Gascón’s office Additionally, the attorney told the DTLA courtroom he wanted a new evaluation of his frequently ailing client’s medical condition.

Held without bail since July 20 in the Twin Towers jail, Weinstein will be back in the Foltz Criminal Justice Center on July 29 for a further hearing.No trial date was set today, but it is estimated that will be coming in the next few weeks.

PREVIOUSLY, July 20 AM: After months of delays, Harvey Weinstein finally is on his way to Los Angeles to face multiple rape charges.

Facing up to a 140 years behind bars if found guilty in the California courts, the already-incarcerated producer was bundled on to a plane in upstate New York early this morning for his extradition to the City of Angels. “This morning at approximately 9:25 (AM ET) custody of Mr. Harvey Weinstein was handed over to the appropriate officials for transport to the state of California per a court order,” a New York State Department of Corrections spokesman confirmed in a prepared statement.

Still in flight, Weinstein could be arraigned as early as Wednesday in L.A. Superior Court. Barring any sudden change of plans, the 69-year-old convicted sex offender will remain out West in DTLA’s Twin Towers jail from his previous abode in the Wende Correctional Facility near Buffalo, NY, until the L.A. proceedings are over – which likely will be months.

The case might take awhile, but local prosecutors have to bring the matter to trial within 120 days under extradition protocols. The L.A. County DA’s office did not return request for comment today on Weinstein’s extradition.

Seeking the media spotlight in an what ultimately was an unsuccessful election year, the charges first were announced by then-L.A. District Attorney Jackie Lacey on January 6, 2020, the very day that Weinstein’s Manhattan sex crimes trial started, with more added later. In April of this year, current L.A. DA George Gascón’s office conveyed a grand jury and 11 new courts of sexual assault were levied against Weinstein, mirroring in many ways the previous charges that the Pulp Fiction EP already faced. That indictment surely will be formally unsealed at some point.

Even though a NY State judge ruled last month that the Weinstein would be heading out to L.A., the producer’s lawyers and reps were caught somewhat by surprise this morning with the actual move after a long-ish court battle to stop or halt the extradition.

“In April we were trying to negotiate an agreement to waive extradition for transfer to L.A. on June 15th,” said a Weinstein spokesperson to Deadline. “We are disappointed that the L.A. DA didn’t wait for the judge’s ruling, but we did expect this to happen at some point. We will be fighting so that Harvey can receive his needed medical care and of course, so that he can be treated fairly. Due process, presumption of innocence and a fair trial are all still his right.”

The West Coast isn’t the only place Weinstein is involved in life-or-death legal proceedings. Back in April, the constantly ailing Weinstein filed his long-anticipated appeal on the 23-year sentence he began serving on March 11, 2020 after being found guilty of two sex crime felony charges in the Empire State. The office of retiring Manhattan DA Cyrus Vance Jr. has not filed a response to that appeal, yet.