He Chose Chai’ Over Degree. He Now Owns Million Dollar Firm In Australia 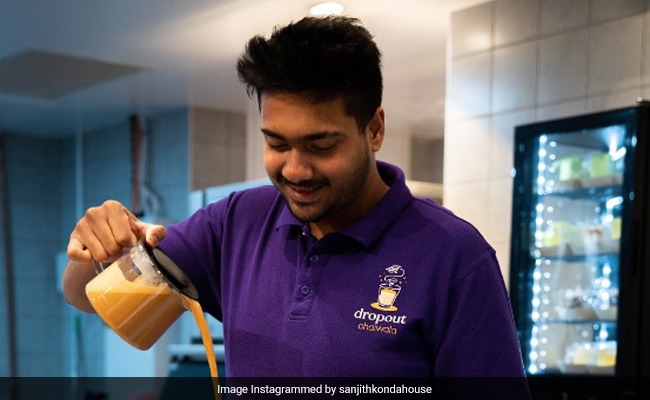 Sanjith Konda House still imports from India as the aim is to give locals a taste of Indian tea.

In an ideal world, Sanjith Konda House would have been completing his Bachelors in Business Administration (BBA) from a leading Australian University, and applying for a white-collar internship.

But a cushy corporate job became a distant reality when the 22-year-old decided to become a “tea-seller”, or “chaiwala”, as he loves to call himself.

Melbourne, known for its coffee fetish, is now binging on tea and samosas as the Nellore-born Sanjith, with his maiden start-up venture ‘Dropout Chaiwala’, has turned his business into a million (Australian) dollar company in just about a year.

The glow sign ‘Dropout Chaiwala’ piqued an Indian tourist’s interest as he stopped by for a cursory second glance. If anyone thinks what’s there in a name, think again as a small tea joint has become one of the favourite hangout places of the Indian community in Melbourne.

“I came here to study Bachelors in Business Administration at the La Trobe University but I failed to complete my course. I became a college drop out and then I wanted my own start-up.

“I was fascinated about tea from childhood and then conceived the idea of Dropout Chaiwala,” Sanjith narrated his story.

“My parents were initially shocked that I had dropped out and then apprehensive that I am planning my own business venture. Melbourne is the world’s coffee capital and I was planning to open a tea joint,” Sanjith could now afford to smile.

Asrar, an NRI, believed in his project and decided to become an angel investor.

“I think next month, our revenue is going to roughly hit 1 million AUD (Rs 5.2 crore approx) after tax deductions and paying all overheads. The profit should be roughly 20 percent. In Australia, there is ease of doing business if your ideas are in place,” Sanjith was now beaming.

He still imports from India as the aim is to give locals a taste of Indian tea.

“Among the Indian community, the ‘Bombay Cutting’ is a big hit and the Australians love Indian ‘masala chai’ and ‘pakodas’. Now we are about to open our second outlet in Melbourne,” informed Sanjith, who has employed Indian students, who do part-time jobs to supplement their incomes.

“But to attract new customers, you need to improvise which we have done with our fusion green tea and chaipuccino (call it the tea’s version of cappuccino).” One asks him in jest if drop outs are preferred when he recruits people for various jobs, he starts laughing.

“At Dropout Chaiwala, while employing people, we don’t look at degrees but passion and hard work,” said the Andhra man, who hopes to have one outlet of his tea joint in all Australian cities.

He also had a word of caution for the youngsters.

“I wouldn’t recommend youngsters to ignore their course when you have spent a lot to come over here,” Sanjith says with a shy but reticent smile.

Post COVID-19, his mother hasn’t yet paid him a visit here and he wants her to have a sip and give her feedback.

“They are really proud now of how I started and where I have reached,” Sanjith said.

While ‘Dropout Chaiwala’ would remain the USP, he now intends to complete his degree in social work, an area he is passionate about.

Anya Taylor-Joy Turned Into A Gamer For Her Role Of Princess Peach On ‘The Super Mario Bros. Movie’ – Deadline

Anya Taylor-Joy Turned Into A Gamer For Her Role Of Princess Peach On ‘The Super Mario Bros. Movie’ – Deadline