He doesn’t get the accolades he deserves: Shastri on Dhawan 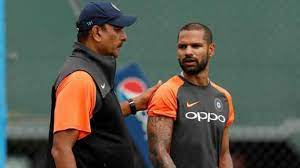 Auckland: With attention mostly centered around the likes of Virat Kohli, seasoned opener Shikhar Dhawan “doesn’t get the accolades that he deserves” despite delivering both as a player and captain, feels former India coach Ravi Shastri.

Leading the Indian team in the three-match ODI series in New Zealand, Dhawan led from the front in the opener here on Friday, scoring a fluent 77-ball 72 at the top of the order while adding 124 runs for the first wicket with Shubman Gill.

Impressed by the left-handed Dhawan’s effort, Shastri said on broadcasters Prime Video, “He’s vastly experienced. He doesn’t get the accolades that he deserves.”

“To be honest, most of the spotlight is on Virat Kohli and Rohit Sharma. But when you look at his one-day cricket record, and you look at some of the innings he has played against top teams in big games, it’s an outstanding record.”

Shastri, during whose coaching tenure Dhawan has played in the national team, said the 36-year-old opener has got all the shots to succeed against quality fast bowlers.

“A left-hander at the top makes a lot of difference. He is a natural stroke player, he has got all the shots to counter top class fast bowling, the pull, the cut, and the drive. He likes it when the ball is coming onto the bat, and I think his experience will be handy here.

“There are a lot of talented youngsters around, but I think in this format of the game, his experience will be in value,” said Shastri who had called Dhawan a gun player earlier in the year.

During his stay in the middle at Eden Park, Dhawan, who has got over 6500 runs in ODIs, found the fence 13 times and looked good for more before hitting one straight to point.

It is not the first time that Dhawan is wearing the captain’s hat as he has led a second-string Indian team in the past and enjoyed good results against Sri Lanka (2-1), South Africa (2-1) and West Indies (3-0).

Dhawan was recently handed the captaincy of IPL side Punjab Kings, who have been struggling to reach the play-offs.