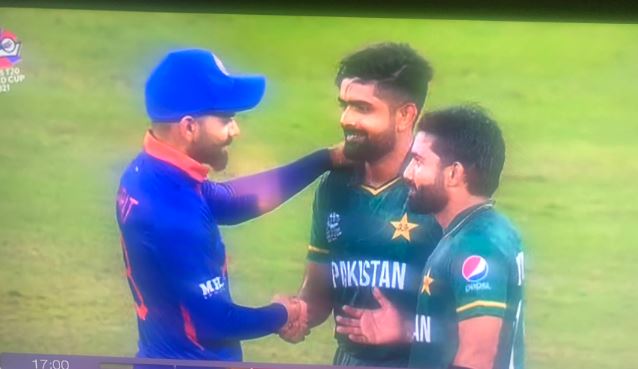 Pakistan halt their 29-year-old World Cup losing streak to India, and they do it in style, with a thumping 10-wicket win! It was a tough day at the office for Team India, but now it’s time to bounce back strong – starting against New Zealand next Sunday.

Pakistan defeated India by 10 wickets in Dubai to get off to a winning start in the tournament. Babar Azam and Mohammad Rizwan, at the start of the chase got Pakistan off to a brisk start in Dubai. The duo guided the side to 46/0 after 7 overs.

They brought up yet another 50 run stand between them as continue to push India onto the backfoot. At the halfway mark, they took Pakistan to 71/0. The two then brought up their 100-run stand, and Babar Azam smashed 50, as Pakistan reached 101/0 after 13 overs.

Eventually Rizwan also brought up his fifty and remained unbeaten on 79, alongside Babar’s 68 not-out, as Pakistan romped home with 2.1 overs to spare. India have set Pakistan a target of 152 in 20 overs. After being put in to bat, Team India got off to the worst start possible. Rohit Sharma was trapped LBW on 0 by Shaheen Afridi in the first over. He was gone for a golden duck. In his next over, Afridi then removed KL Rahul on 3 by disturbing his timber.

At 4, Suryakuamr Yadav played a few shots and got the scoreboard ticking but in the 6th over, he was dismissed by Hasan Ali. Eventually, India reached 36/3 after the Powerplay. In the next four overs, India scored 24 to keep the run-rate up. Thanks to Rishabh Pant upping the ante and Kohli playing second fiddle, India began their comeback.

He hit two one-handed sixes before being caught and bowled by Shadab Khan. India got to 100/4 after 15 overs. Eventually, after Kohli got to his 29th T20I fifty, India posted 151/6 in their 20 overs. Kohli was dismissed for 57.