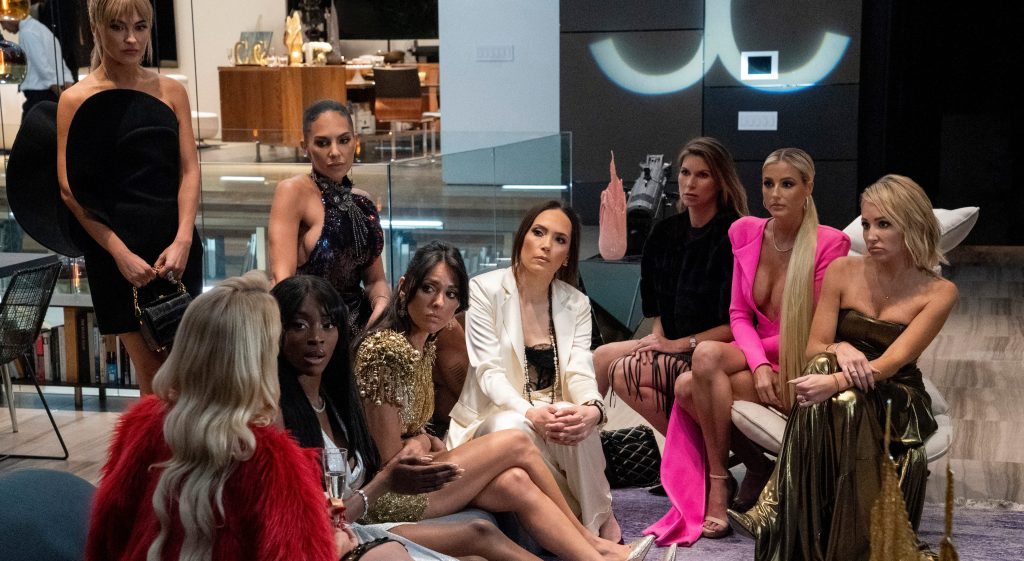 When Adam DiVello first pitched Selling Sunset to Netflix, the plan wasn’t to turn an unscripted show about The Oppenheim Group—a high-end real estate firm in West Hollywood—into something akin to the Real Housewives franchise.

“I don’t think we ever knew exactly what it was going to be,” admits DiVello about the show’s 2019 launch. “I know when I approached the Oppenheim brothers about being on the show, they were very hesitant. They didn’t want to be like a Bravo-type, so to speak, with no offense to Bravo. They just didn’t want to be on a show where there was constant fighting. I promised and said, ‘No, I’m going to make it about real estate and these high-end homes you guys sell in Los Angeles.’ Our first one was a $40 million house, which is crazy. But of course, I told them we are going to follow their personal lives and see what happens.”

It’s the “see-what-happens” part that turned Selling Sunset into an engrossing spectacle that has only gotten better with age. (The show just dropped its fifth season in April.) Though it may have been DiVello’s goal to focus on the insanely priced homes on Hollywood’s famed Bird streets, everything changed with the Season 2 arrival of Chrishell Stause—a former soap star from Days of Our Lives whose very public split from actor Justin Hartley (This is Us) became a delicious storyline the following year.

“The minute that Chrishell walked in and didn’t click with [agent] Christine Quinn, we knew it was going to take a direction in that [Real Housewives] way,” admits DiVello. “Where it escalated to, I don’t think anybody could have foreseen that.”

At times, it seems like Jason and Brett Oppenheim have their work cut out for them; all they can do is sit quietly by and watch Stause and the other perfectly coiffed agents—Mary Fitzgerald, Heather Rae El Moussa, Amanza Smith and Davina Potratz, among them—pick-a-little talk-a-little about all the ways Quinn can get under their skin. Sure, they talk business with the best of them; agent Emma Hernan, for example, provides helpful remodeling tips while trying to get a buyer to drop 10 million on a spiffy, hillside home. But the real stakes occur whenever Quinn strolls in wearing her bitty skirts and suicide heels.

“It could have gone either way. Had they all hugged and embraced, it might have been a different show,” DiVello says. “It certainly added another layer of drama to the series, which I think viewers enjoyed.”

She wasn’t the only one drawing attention in Season 4: Stause and her boss, Jason, had a brief fling that had some of her co-workers demanding little broker babies. The brothers Oppenheim also announced plans to expand their bling empire: Netflix ordered a spinoff called Selling the O.C., a yet-to-be scheduled show that focuses on their other firm in Newport Beach, CA. “It’s a fun cast. They have zero filter,” teases DiVello, who also executive produces Selling Tampa for Netflix. “And it’s not all females this time. There are quite a few who are single, while some are newly married. It’s a different world down there.”

But doubtless not so different as to exclude the occasional hen fight.

Ukraine Hits Russian Base With Over 30 Strikes In Melitopol

Ukraine Hits Russian Base With Over 30 Strikes In Melitopol

How Pandas Became Vegetarian Decoded After Discovery Of Fossils In China