Hrithik Roshan Is “Missing The Sun.” The Internet Is Trying To Read Between The Lines 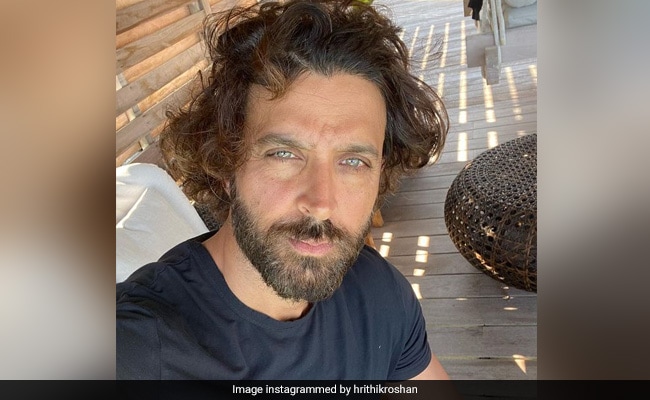 Hrithik Roshan, who recently returned from Paris vacation with girlfriend Saba Azad, shared a picture of himself showing off his morning look. The actor posted a selfie on his Instagram handle and captioned it as: “Missin the (sun emoticon). In the image, the actor can be seen sporting a full beard look in a black t-shirt. Soon after he shared the post, fans started guessing if he was hinting at his girlfriend or a sequel of Krrish. A fan wrote, “Is ‘sun’ Saba Azad’s pet name?” while another wrote: “Krish mood is coming”. “Dhoooooop (alien emoticon), wrote another. Hrithik Roshan’s mother, Pinkie Roshan, also commented, “(sun emoticon) is in my heart (heart emoticon).

Hrithik Roshan and Saba Azad have been in the news ever since they were spotted on a dinner date in February. Later, the couple made their relationship red carpet official on Karan Johar’s 50th birthday. Often, she is featured in Hrithik’s family pictures.

A few days ago, Hrithik Roshan was holidaying with his girlfriend, Saba Azad. The actress shared pictures and a video from their time at Ronnie Scott’s Jazz Club. In captions, she wrote, “Where the Jazz cats at??” Soon after she shared the post, Hrithik’s ex-wife Sussanne Khan commented, “Sooo cute”. Check out the post below:

Meanwhile, fans are eagerly waiting for Hrithik Roshan’s Krrish 4. Earlier, several reports were doing rounds that Rakesh Roshan is working on the script. However, he is yet to officially confirm the news.

On the work front, Hrithik Roshan has several films in his kitty – Vikram Vedha, co-starring Saif Ali Khan. The film is slated to hit the theatres on September 30. Also, he has Siddharth Anand’s Fighter with Deepika Padukone. The movie is scheduled to release next year. On the other hand, Saba Azad was last seen in Rocket Boys, starring Jim Sarbh and Ishwak Singh.