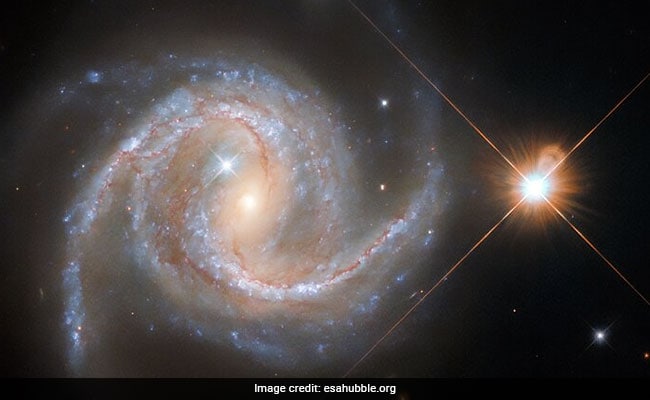 The Hubble Space Telescope recently captured a stunning image of a “spiral galaxy”. The space telescope also captured a shot of nearby stars in the Milky Way galaxy that are seen shining just as brightly as its galactic companion.

The European Space Agency had originally released the image of the NGC 5495 galaxy back on September 26. However, it recently went viral due to the Milky Way’s stars within it effectively photobombing the spiral galaxy.

According to the agency, 60 per cent of galaxies are spiral galaxies. This means that most of the stars in the universe are contained within a galaxy like our own, or like the one seen in the new Hubble image.

NGC 5495 is a ‘Seyfert galaxy’; which means they exhibit activity at their cores, according to a statement released by the European Space Agency. Supermassive black holes, which are thought to be in the centre of the majority of galaxies in the universe, are what give these galactic centres their energy.

“As well as NGC 5495, two stellar interlopers are visible in this image. One is just outside the centre of NGC 5495, and the other is very prominent alongside the galaxy. While they share the same location on the sky, these objects are much closer to home than NGC 5495: they are stars from our own Milky Way,” the agency wrote in a press release. The image was captured using Hubble’s Wide Field Camera 3, and it shows the galaxy’s front face as well as its core.

The Hubble telescope, launched more than 30 years ago, is a joint project by America space agency NASA and ESA.