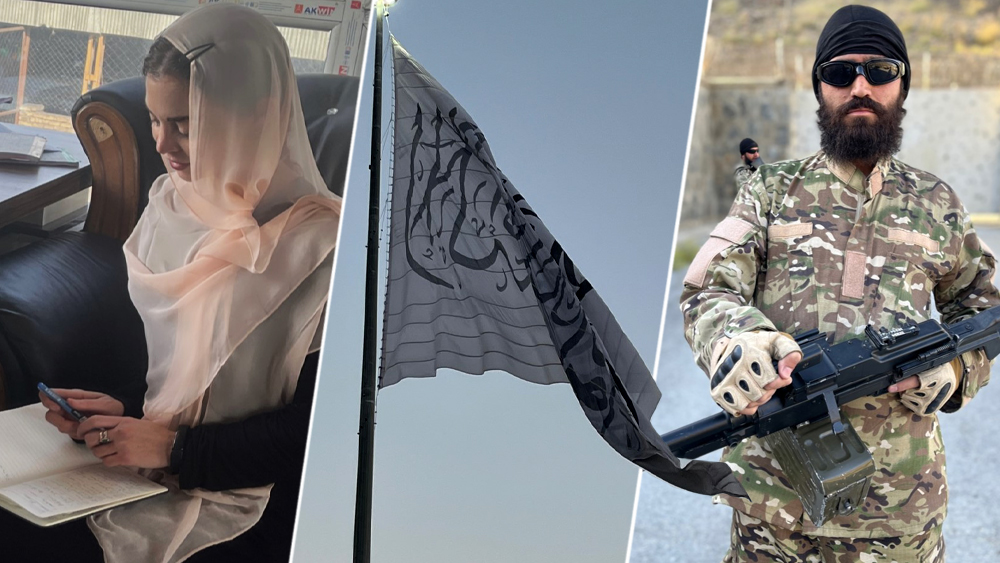 Editors note: Hollie McKay’s latest special report for Deadline finds the veteran foreign affairs correspondent and Only Cry for the Living: Memos from Inside the ISIS Battlefield author back in Afghanistan more than a year after the U.S. withdrawal, and negotiating how to be a journalist in the country now the Taliban has solidified its return to power.

Squished into the back of a Taliban truck with intelligence authorities and bumping along a barren mountain road on what feels like the edges of the earth, I wonder how long my detainment will last. It is not the first time I have been forced into their temporary custody, and it would not be the last.

People are often surprised to learn I went back to Afghanistan in September, believing that it must be impossible to get there because of its isolation on the world stage. The truth? Most of the airlines that operated before the fall quickly resumed running to and from Kabul. In addition, I had an existing work permit that I renewed in January before the shuttering of the Los Angeles consulate under the old government (yes, the Taliban still honored it). However, most visas are now issued to the tiny trickle of journalists (mainly from Europe) through Emirate Embassy representatives in Istanbul, Islamabad or Dubai.

But even with a visa, there is no guarantee you will be granted permission to work on the ground.

The first thing I do on arrival is meet with a designated media representative inside the Ministry of Foreign Affairs, accompanied by Maiwand Naweed, my longtime friend and fixer (the term given to a local on the ground who acts as a foreign journalist’s kind of producer, meetings organizer and interpreter).

Despite being probed and approved a month earlier, I am now told a new slate of rules was implemented a week before I touched down, unbeknown to my fixer or to anyone else I know. Instead, I have to wait up to 24 hours for an entire board, complete with different Foreign Ministry and Intelligence appointees, to vet my past work and social media accounts and issue a green light.

The Taliban rep rattles off a string of familiar journalist names and news outlets, explaining that they are effectively banned from working in the country.

So, what gets a foreign journalist on the blacklist?

I learn that it is not necessarily criticism of the Islamic Emirate (the official name of the Taliban government) but stories that “violate” stringent cultural customs ingrained in the Taliban worldview, such as filming an Afghan woman giving birth, deep dives into sexual preferences, or simply working in-country without going through the proper permission process.

Driving the latter point home, the Taliban spokesperson tells me that a Western journalist arrived under the radar and visited a remote village where children were gathered for a vaccine drive, yet reported that they were being assembled to be sold into slavery. Whatever the happenings, the underlying message is outsiders are to be viewed with skepticism.

From their point of view, the Taliban government – the enemy side of the long-running, Western-led war – is rarely reported on from a neutral and balanced viewpoint expected by universal journalistic standards. Despite their relative receptiveness to the press in the early days, the top echelons seem to have reached the frustrating conclusion only the negative and misleading anti-Taliban stories sell to the outside.

Now everyone pays that price.

“In the beginning, it was super easy. You could get access to go anywhere, but with time they have increased the restrictions. Everywhere you go, you need to take permission, especially with the lower-level Taliban. They think that you should be informing them. So, any small doubts they have, they will just say go to the prison,” Naiweed explains, adding that the number of foreign journalists coming to Afghanistan has sharply decreased.

With a sigh of relief, I later learn I have the approval to work in-country. After obtaining the Foreign Ministry letter, I have to visit the Minister of Information and Culture in Kabul for a second letter. And every province I visit after that, the first thing I have to do is obtain yet another admission slip from the provincial Information and Culture Director. Despite having to inform officials of my presence, I do not have to explicitly tell them what stories I am covering or whom I am talking to, and I am not asked to report back after the fact.

Nevertheless, any journalist should be prepared to carve out a significant portion of the daylight hours to obtain permits from top to bottom. If it sounds exhausting, that is because it is. I find that whenever I go to work on a story, local Talibs express confusion at my dusty file of letters. With so few foreigners operating in the country, especially in the far-flung parts, they have almost certainly never seen the Emirate-stamped letters and thus, even more suspicion ensues.

As mentioned, while probing a labyrinth of tunnels on the border of Khost leading into Pakistan’s shadowy Waziristan area, a group of local Taliban at first allow me to walk through the dark maze but insist that I cannot take photographs. Later, they follow us out in our car and – like smiling schoolboys who have just caught the class nerd cheating on a test – insist that my Fitbit is some spy camera.

This results in them confiscating all my possessions, from my phone to my passport, watch, wallet and press cards, and a long afternoon shuffled from place to place with no cell service. Then, hours later, after the Khost governor (a former Guantanamo Bay detainee, one of the five transferred for the release of U.S. Army deserter Bowe Bergdahl) vouches for me, I am finally released back into the dark night.

Days later, while covering a deadly attack and suicide blast on the much-persecuted Hazara community in Kabul – whereby more than 50 schoolgirls were slain – angry Taliban demanded I hand over my phone, and when I refused, sent me to the local police station.

For many locals, the climate has become too much to tolerate.

A survey by Reporters Without Borders (RSF) and the Afghan Independent Journalists Association released in late December shows a dramatic dwindling in the Afghan media landscape since the Taliban took power last August.

According to the comprehensive assessment, a total of 232 media outlets shuttered (more than four out of every 10 outlets) and more than 6,400 journalists have lost their jobs since the previous government fell, roughly 60% of those previously working.

It is also glaringly apparent that women have suffered the brunt, with RSF concluding that “four out of five” are no longer working, compared to one out of every two men.

From my anecdote-only lens, those figures have only continued to erode throughout 2022. This may be attributed to self-censorship and concern about working under the Taliban’s thumb, as well as the economic hardships that have plagued the nation since the U.S. withdrawal and freezing of funds, the loss of advertising dollars, and financial support from foreign governments and organizations.

Yet government spokesman Zabihullah Mujahid has asserted in various statements that the Emirate supports “freedom for the media in the defined framework for preserving the country’s higher interests, with respect for the Sharia and Islam” and that the government wanted to “help those media that are operating to continue to do so and help the others to find solutions so that they can resume operating.”

Nevertheless, this year, Afghanistan was ranked 156 out of 180 countries on the World Press Freedom Index, a drop from its early 2021 position of 122.

However, I do see a slither of hope on a grim horizon. TOLO News, Afghanistan’s first 24-hour cable network launched in 2010, continues to impressively push through the barriers and remain firm. When the women reporters were ordered to cover up on air in May, their male colleagues followed suit in solidarity. Moreover, Taliban officials frequently appear – and often in panels – forced to debate other Afghan intellectuals critical of their policies and approach.

“Of course, there are challenges and limitations, but media still operates. It is very surprising. If you watch the debates, you will find multiple sides and some very critical,” says Suleyman bin Shah, the deputy economic advisor in the former government and frequent television guest and critic, pointing out that while the Taliban often doesn’t like his condemnation, he has not suffered retaliation.

In the end, Afghanistan is a taxing place that requires much patience and a steady acceptance that anything, at any time, can happen. I’ve been pulled aside for daring to sit in the front passenger seat, and security tried to prevent me from entering the Justice Ministry because my face could be seen.

This year, Afghanistan was ranked 156 out of 180 countries on the World Press Freedom Index, a drop from its early 2021 position of 122.

Still, as a foreigner, I understand that despite the inherent challenges, I am given greater leverage to maneuver than my local journalism counterparts – well, what is left of the media industry.

And despite the exhaustion, the frustrations and the uncertainty that comes with stepping into the land soaked with so much blood and tears, I feel unshakably committed to coming back, to the belief that Afghanistan matters.

While the U.S. may have chaotically pulled out and moved on, it does not mean that journalists – especially those of us who have covered the war-ravaged country for many years – should also abandon the country that will forever hold so much collective pain and memory.