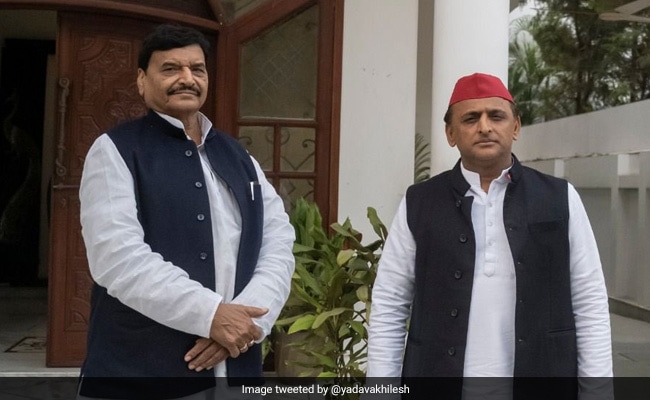 Shivpal Yadav’s party formed an alliance with the Samajwadi Party for the 2022 assembly election.

The turf war between Samajwadi Party Chief Akhilesh Yadav and his uncle Shivpal Yadav that has intensified after the BJP’s big Uttar Pradesh state election win, appears to have taken a new turn with all units – national and regional – of the Pragatisheel Samajwadi Party, the outfit headed by Shivpal, being dissolved today.

The dissolution order was passed by Aditya Yadav, Shivpal’s son and the national general secretary of the party. This latest development has once against intensified speculation that Shivpal Yadav, the younger brother of Akhilesh Yadav’s father and Samajwadi Party founder Mulayam Singh Yadav, may join hands with the BJP. However, neither Shivpal nor his party have reacted to these reports.

On Thursday, Mr Yadav appeared to back the idea for a Uniform Civil Code across the country, an issue identified with the politics of the BJP. The remarks were made at a party function to mark Ambedkar Jayanti in Lucknow. “Ambedkar had raised the issue in the constituent assembly, Lohia ji (socialist leader Dr Ram Manohar Lohia) had raised the issue too, and on his (Ambedkar’s) Jayanti we are raising our voice for a uniform civil code. We are ready to agitate for it and raise or voice about it,” Shivpal Yadav said at the function.

After years of bickering between Akhilesh Yadav and his uncle Shivpal that started before the 2017 Uttar Pradesh assembly election as the former chief minister tried to consolidate his hold over the Samajwadi Party, eventually leading to his uncle’s exit, the two appeared to have made up before the 2022 election. Shivpal Yadav’s party formed an alliance with the Samajwadi Party and he fought the polls from his stronghold Jaswant Nagar on a Samajwadi Party ticket and won.

But the “reunion” was short-lived. Days after the Samajwadi Party lost the Uttar Pradesh election, Shivpal Yadav reportedly met with leaders of his Pragatisheel Samajwadi Party and told them: “Be prepared for a big fight . He also met with Chief Minister Yogi Adityanath, reinforcing speculation that he is on the verge of a switch to the ruling BJP.

The fragile uncle-nephew relationship is at breaking point over differences that have been getting more and more visible since the election results. Shivpal Yadav reportedly met with Akhilesh Yadav on March 24, just a day before Yogi Adityanath’s second oath ceremony, and asked for a bigger role in the Samajwadi Party. Sources say Akhilesh Yadav reminded his uncle that he was an ally, not a member of the Samajwadi Party.