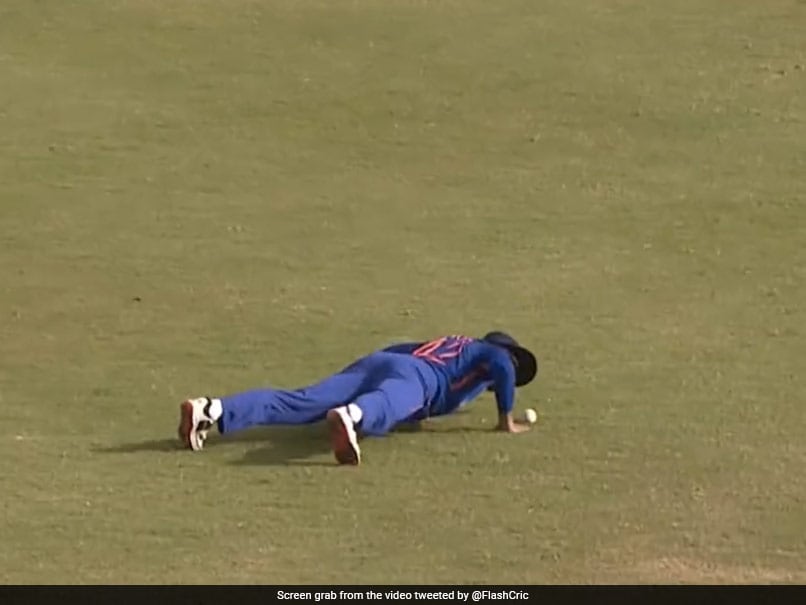 India batter Shikhar Dhawan is one of the most jovial cricketers in the world. Dhawan, who is leading the team in the ongoing ODI series against West Indies, scored a brilliant 97 to lay the foundation of the team’s win in the first ODI on Friday. However, Dhawan drew laughter from his teammates with his hilarious antics during the West Indies’ chase. The incident happened during the 37th over when Brandon Kings played a backfoot punch off Yuzvendra Chahal’s bowling.

Dhawan, who was deployed at covers, made an excellent diving effort to save some runs for his team.

However, Dhawan attempted a couple of pushups before standing up, which drew laughter from his teammates. Even the stand-in captain was seen smiling.

The commentators too be heard having a laugh about Dhawan’s antics.

India took a 1-0 lead in three-match series after edging out West Indies by three runs.

After being put into bat, Dhawan and Shubman Gill gave India an excellent start, adding 119 runs for the first wicket.

Dhawan was dismissed on 97 while Gill also scored a brilliant 64 on his return to the ODI team.

Shreyas Iyer also impressed with the bat, scoring 54 off 57 balls.

Deepak Hooda and Axar Patel also played cameos of 27 and 21, respectively, as India ended on 308 for seven in 50 overs.

In reply, West Indies fell short by three runs as Mohammed Siraj’s excellent last over gave India a 1-0 lead in the series.

West Indies had got off to a bad start in the chase, losing the early wicket of Shai Hope.

However, Kyle Mayers and Shamarh Brooks steadied their ship, adding 117 runs for the second wicket.

Mayers hit a brilliant 74 while Brooks scored 46. Both were dismissed by Shardul Thakur in quick succession.

Listen to the latest songs, only on JioSaavn.com
Brandon King also completed his fifty, and kept West Indies ticking in the chase. However, Yuvzvendra Chahal came up with a timely breakthrough to make the job tougher for the hosts.

Akeal Hosein and Romario Shepherd played unbeaten cameos of 32 and 39, respectively, but Siraj kept his composure in the final game to take India across the finishing line.

Previous articlePartha Chatterjee wasn’t scamming on his own accord: BJP’s veiled attack on Mamata Banerjee
Next articleWhere Does Our Food Come From? Latest Report Reveals
LocalTakSabse Tez