Indian American Siblings’ Crypto Story. They Are 14 And 9 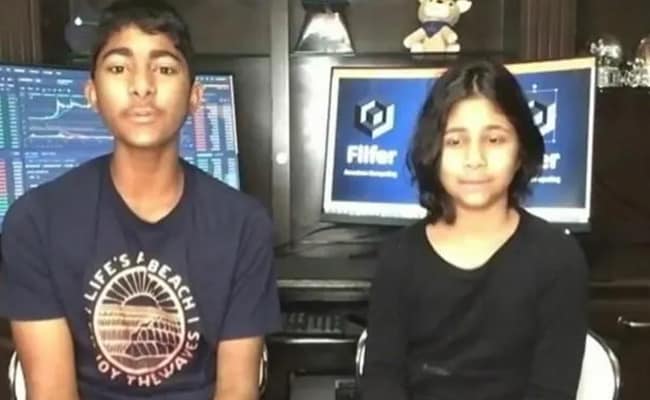 Just seven months back, two young Indian American siblings started mining cryptocurrency as a hobby. Today, 14-year-old Ishan and nine-year-old Aanya have set a goal to fund their college education with their earnings – about $30,000 a month.

How were they introduced to the idea? As they speak to NDTV, Ishan recalls, “In February, I heard about bitcoin and cryptocurrency spiking up. I really wanted to invest in some… but I didn’t have enough money to buy. So instead of buying full, I decided to just buy the equipment and earn it instead. And now (after having come this far), I am very proud of it.”

Speaking about what got her fascinated, nine-year-old Aanya says, “We both came up with the idea together. When he thought of it, I was really interested. I helped my brother mine and buy the equipment.”

Cryptocurrency mining is no child’s play, it is often said. Was it intimidating for the two of them? No, says Ishan. “Actually, if you were to really learn about mining, see a lot of YouTube tutorials, just read some articles. That’s how I started. You need a graphics cards, software for those who find numbers difficult.”

Simplifying it further, he says, “Cryptocurrency is just like any other form of currency… it works like dollar. You can use it to buy stuff and it works the exact same way.”

Both of them want to put this money to good use, they say. “We want to use this money for college,” says Anaya. “I want to go to the Cornell University and become a doctor.”

Ishan calls it a “learning experience”. “In the start,” Ishan recalls, “We were making no money. We only made $3 a day. I transformed my gaming computer to a mining computer. But slowly as I put my mind to it, I got better. I am today making 35,000 dollars a month. I am really proud.”

“But I was equally proud when I was making $3 a month, because I knew it was not a money-making thing but more a learning experience. That’s the favourite part of this whole business.”