India’s Trade With China Up By 50% Despite Aggression: Arvind Kejriwal 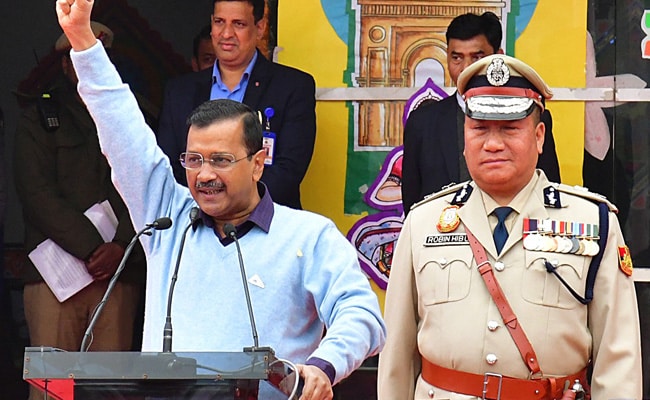 Mr Kejriwal suggested India should set up manufacturing units for items it imports from China.

Despite Chinese aggression, India’s trade with Beijing has increased by 50 per cent, Delhi Chief Minister Arvind Kejriwal said in an apparent swipe at the BJP-led Centre, and called for a boycott of China to send out a strong message.

Addressing a Republic Day function organised by the Delhi government at Chhatrasal Stadium in New Delhi, Arvind Kejriwal alleged that China is procuring more weapons to use against India with the very money it earns doing trade with us.

“We read about Chinese Aggression on our borders. Today a highly reputed newspaper reported how the Chinese have encroached upon some of our territory near the border. This is a matter of deep concern for every citizen of our country,” he said at the event.

“Our soldiers put in all their might to fight the Chinese on the border. It is now the duty of all citizens and all governments to stand shoulder to shoulder with our soldiers and support them … It is our duty to send a strong message to China against its aggression. It is our duty to boycott China, look into its eyes and make it clear that we will not compromise on national security,” he said.

He lamented that over the last few years, the country has seen a rise in trade with China despite its forays on the borders.

“In 2020, our country bought goods worth 65 billion dollars. In 2021 the import figures shot up to 95 billion dollars, a straight 50 per cent jump. Why are we making China richer and richer at the cost of our security? Why are we spending all our money on them? Just look at what they are doing … They are using our money to buy weapons and upgrade their forces to fight against us,” he alleged.

The Aam Aadmi Party leader suggested India should set up manufacturing units for items it imports from China and boycott Chinese goods.

“It’s foolish to continue trade with China. We import items like shoes and slippers, mattresses and cushions, spectacles, toys, and statues. Don’t we make these items in our country? I’m certain we do,” he said.

The Chief Minister said the more India buys these goods from China the more “we reduce production of made in India goods of this kind.”

“What is the problem with increasing their production in India? If we produce all these goods in our country, employment will also be generated at a large scale. We are giving away not just our trade but our employment to China too. If we give a chance to our traders, our industrialists, our entrepreneurs, we will very easily match China’s scale of production,” he added.

Scaling up production will, first, ramp up job creation and second, will show China “its place,” he said.

“In the last five to six years, as many as 12 lakh high net worth individuals migrated out of the country. These HNIs were traders, entrepreneurs and industrialists who got fed up with the country’s system and left.

“Why are they harassing our own entrepreneurs and repelling them, but hugging the Chinese? This is not the time to let our own people leave, but to unite every Indian on the planet,” he said, apparently attacking the central government for its policies.

Arvind Kejriwal extended his greetings on the 74th Republic Day to the residents of Delhi and his other countrymen.

“Our freedom fighters, such as Shaheed-e-Azam Bhagat Singh, Netaji Subhas Chandra Bose, and Shaheed Rajguru sacrificed their lives for us to breathe in a free and democratic country. They entrusted us … to protect and keep sacrosanct our freedom, our independence, our constitution, our republic and our democracy for the ages to come,” he said.