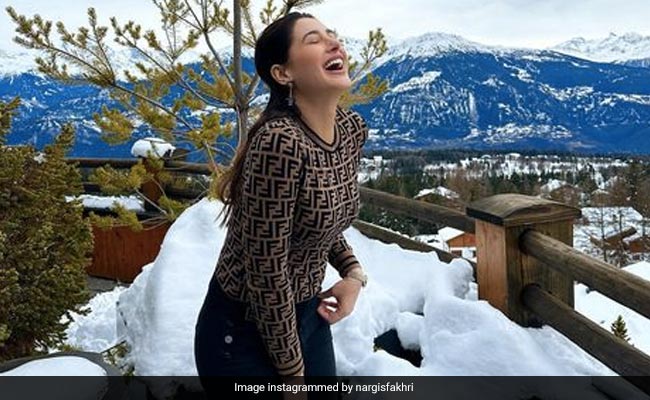 New post alert. Courtesy: Nargis Fakhri. The actress is currently enjoying her time in Switzerland. Oh boy. Her holiday album looks dreamy. From the snow-capped mountains to the infinity pool, Nargis is clearly having an amazing time. Her million-dollar smile adds an extra edge to the slides. Nargis didn’t waste much time thinking about the caption and just wrote, “Wanted to see snow. So I went to see snow,” and added a snowflake emoji. Her Instafam couldn’t help but drop red hearts and fire emojis in the comments section.

Before this, Nargis Fakhri was in Dubai for an event. The actress has shared a series of pictures and Boomerangs from her time in the Gulf nation. Nargis looks stunning in a black gown with heavy sequin work. The cape adds more drama to the outing. For the caption, Nargis has just picked a black heart emoji.

Now, it is time to look at some pictures of Nargis Fakhri from her time in Los Angeles, California.

Nargis Fakhri also appeared in a music video Fayaah Fayaah with Guru Randhawa. “The wait is now over! Come with us on a journey to the epic Superhero’s Universe! #FayaahFayaah from #ManOfTheMoon out now, tune in,” wrote Nargis at the time of announcing the release of the music video.