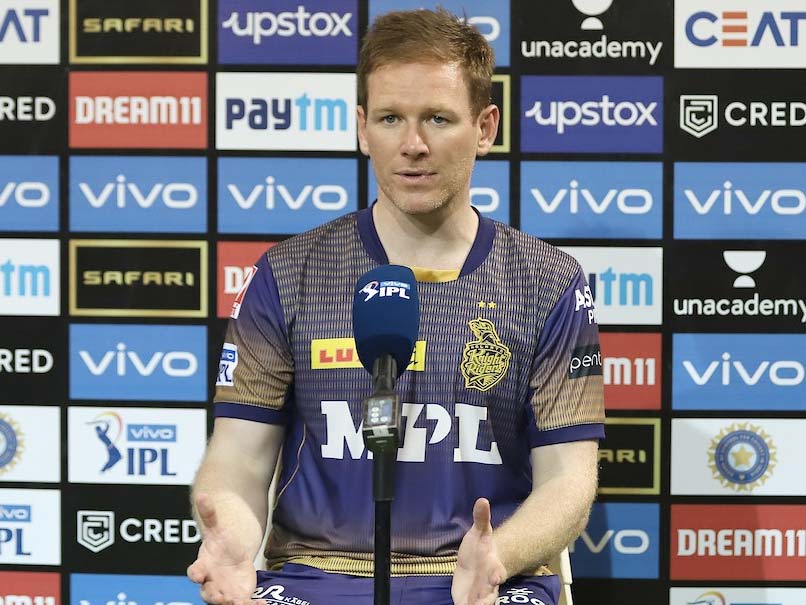 Eoin Morgan said in the last two games, KKR have played how coach Brendon McCullum wants them to play.© BCCI/IPL

Before the start of the UAE leg of IPL 2021, Kolkata Knight Riders were hovering around the bottom of the IPL points table with just two wins to their name in seven games. The IPL 2021 India leg had proved to a difficult for Eoin Morgan and his team and with Pat Cummins pulling out of the second phase, many expected KKR to struggle again. But a change in scenery has resulted in a change in fortunes for the Kolkata outfit. Back-to-back wins over Royal Bangalore Challengers and Mumbai Indians have seen KKR climb to fourth in the standings. Captain Eoin Morgan feels in the last two games, KKR are finally playing how coach Brendon McCullum wants them to play.

“Well it’s been a long time coming. Since Baz (McCullum) has taken over last year, the way we have played in the last two games is the way our coach wants us to play. It suits our talent to play this way. To hold such a strong Mumbai Indians side to 155 and chase this down gives us confidence,” Morgan said in the post-match presentation ceremony.

The England star was all praise for KKR’s newest batting hero — Venkatesh Iyer. The little known Iyer has taken the UAE leg by storm, scoring an unbeaten 41 and following it up with 30-ball 53 to lead KKR’s batting charge at the top of the order.

“Fitting Venkatesh Iyer into our XI has been difficult with a lot of talented guys, and it’s fantastic the way he’s scored his runs. In the practice games too he has gone on to play this way.”

Not only have KKR won both their matches in the UAE so far, but they have done it style. In the first match, they first restricted RCB to a paltry score of 92 before chasing down the target in just 10 overs.

On Thursday, Mumbai Indians batters fared a little better than RCB and posted 155/6 in their 20 overs. But KKR once again produced an attacking batting display to make a mockery of the target, chasing it down in only 15.1 overs for the loss of three wickets.

“The first two games in this phase has been the template for us to play. There’s only one way for us to go in the points table and that is upwards,” added the KKR skipper.

Next up for KKR are second-placed Chennai Super Kings on Sunday.