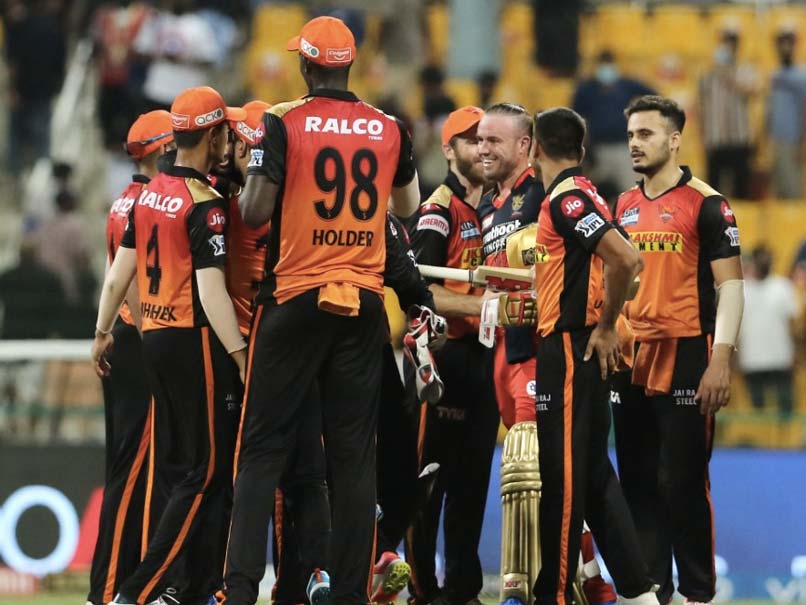 Sunrisers Hyderabad notched only their third win of the season on Wednesday.© IPL

Sunrisers Hyderabad (SRH) notched only their third win this season, beating Royal Challengers Bangalore (RCB) by four runs in an Indian Premier League (IPL) 2021 clash in Abu Dhabi on Wednesday. SRH posted a total of 141/7 in their 20 overs, with Jason Roy scoring 44 and skipper Kane Williamson chipping in with a knock of 31. Harshal Patel, who set a new record of most wickets by an Indian bowler in a single IPL season, finished with figures of 3/33. In response, SRH restricted RCB by 137/6, with pacer Umran Malik finishing with 1/21 and delivering the fastest ball of the season.

Delhi Capitals remain top of the standings with 20 points, followed by Chennai Super Kings in second (18). RCB are third with 16 points.

All teams have one game each left to play.

KL Rahul remains top of the Orange Cap race with 528 runs, followed by Ruturaj Gaikwad (521) in second and Shikhar Dhawan (501) in third.

Jasprit Bumrah is third with 19 wickets, followed by Mohammed Shami in fourth (18).

Arshdeep Singh and Rashid Khan are both fifth with 16 wickets each.

Previous articleNavratri 2021: 7 Vrat Recipes You Can Make In Under 30 Minutes
Next articleApple Said to Face EU Antitrust Charge Over NFC Chip, May Lead to Opening Up Payment System to Rivals
LocalTakSabse Tez