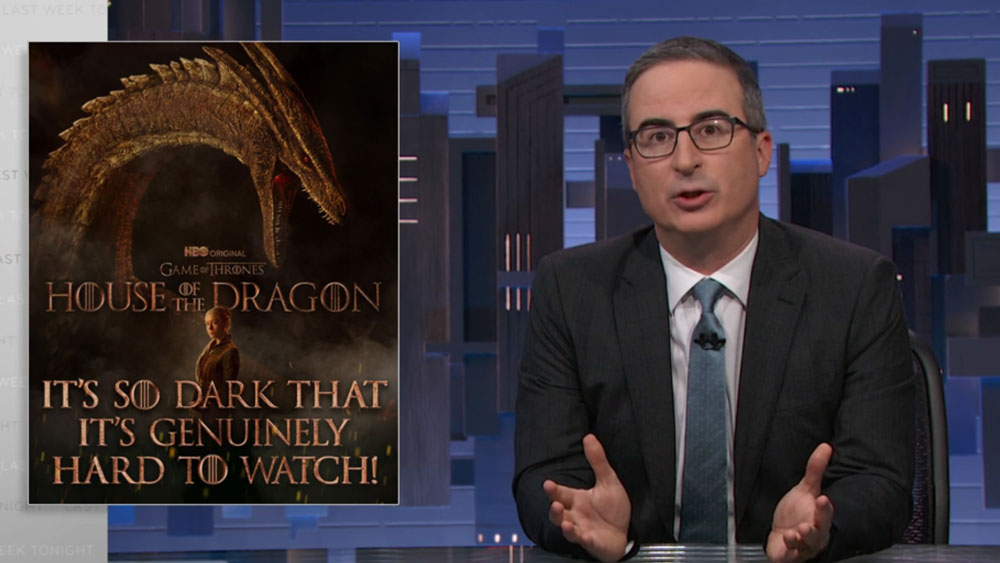 John Oliver was back for another episode of Last Week Tonight and this time he’s taking digs at HBO’s own House of the Dragon. The comedian took a jab at the dark scenes from the Game of Thrones spinoff that have proven to be controversial among viewers.

While the topic was transgender rights and a little girl expressing her frustration over the bathroom situation in school, Oliver tried to make the dark moment lighter by poking fun at the HBO fantasy series.

“That is brutal! It is so dark it is genuinely hard to watch,” Oliver said of the young transgender girl talking about having security guards when she goes to the bathroom.

Oliver then quipped, “Which would also, coincidentally, be a pretty accurate tagline for House of the Dragon.”

On the screen the tagline read as follows, “It’s so dark that it’s genuinely hard to watch.”

It was after Episode 7 of House of the Dragon aired that viewers expressed their frustration over how dark some scenes were. The episodes seemed to have been shot while there was daylight but dimmed in postproduction to make it appear it was in the evening hours.

Some fans were not happy they had to adjust their television settings and took to social media to vent. HBO Max’s customer service Twitter account replied to some viewers expressing that the poorly lit scenes were on purpose.

“We appreciate you reaching out about a night scene in House of the Dragon: Episode 7 appearing dark on your screen. The dimmed lighting of this scene was an intentional creative decision. Thanks!” the HBOMaxHelp account tweeted.