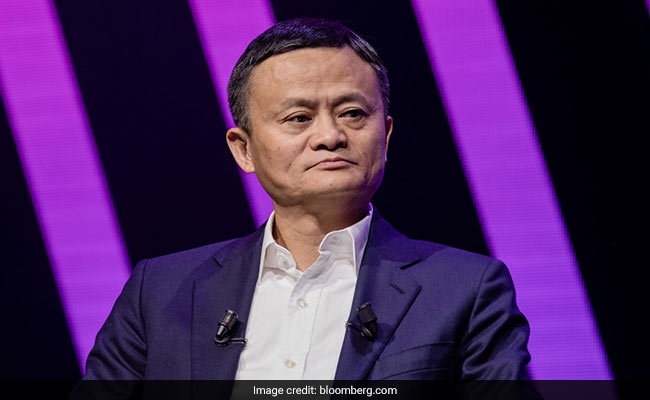 Jack Ma’s company will likely have to apply and register to get into any new areas of finance in future.

The full implications of Beijing’s rapid-fire moves against Jack Ma’s internet empire in recent days won’t be apparent for weeks, but one lesson is already clear: The glory days for China’s technology giants are over.

The country’s government imprinted its authority indelibly on the country’s technology industry in the span of a few days. In landmark announcements, it slapped a record $2.8 billion fine on Alibaba Group Holding Ltd. for abusing its market dominance, then ordered an overhaul of Ant Group Co. On Tuesday, regulators summoned 34 of the country’s largest companies from Tencent Holdings Ltd. to TikTok owner ByteDance Ltd., warning them “the red line of laws cannot be touched.”

The unspoken message to Ma and his cohorts was the decade of unfettered expansion that created challengers to Facebook Inc. and Google was at an end. Gone are the days when giants like Alibaba, Ant or Tencent could steamroll incumbents in adjacent businesses with their superior financial might and data hoards.

“Between the rules for Ant and the $2.8 billion fine for Alibaba, the golden days are over for China’s big tech firms,” said Mark Tanner, founder of Shanghai-based China Skinny. “Even those who haven’t been targeted to the same extreme will be toning down their expansion strategies and adapting many elements of their business to the new bridled environment.”

Tech companies are likely to move far more cautiously on acquisitions, over-compensate on getting signoffs from Beijing, and levy lower fees on the domestic internet traffic they dominate. Ant in particular will have to find ways to un-tether China’s largest payments service from its fast-growth consumer lending business and shrink its signature Yu’ebao money market fund — once the world’s largest.

Even companies that have been less scrutinized so far — like Tencent or Meituan and Pinduoduo Inc. — are likely to see growth opportunities curtailed.

The watershed moment was years in the making. In the early part of the last decade, visionary entrepreneurs like Ma and Tencent co-founder Pony Ma (no relation) created multi-billion dollar empires by up-ending businesses from retail to communications, elevating the lives of hundreds of millions and serving as role models for an increasingly affluent younger generation. But the enormous opportunities coupled with years of hyper-growth also fostered a winner-takes-all land-grab mentality that unnerved the Communist Party.

Regulators grew concerned as the likes of Alibaba and Tencent aggressively safeguarded and extended their moats, using data to squeeze out rivals or forcing merchants and content publishers into exclusive arrangements. Their growing influence over every aspect of Chinese life became more apparent as they became the conduits through which many of the country’s 1.3 billion bought and paid for things — handing over vast amounts of data on spending behavior. Chief among them were Alibaba and Tencent, who became the industry’s kingmakers by investing billions of dollars into hundreds of startups.

All that came to a head in 2020 when Ma — on the verge of ushering in Ant’s record $35 billion IPO — publicly denigrated out-of-touch regulators and the “old men” of the powerful banking industry. 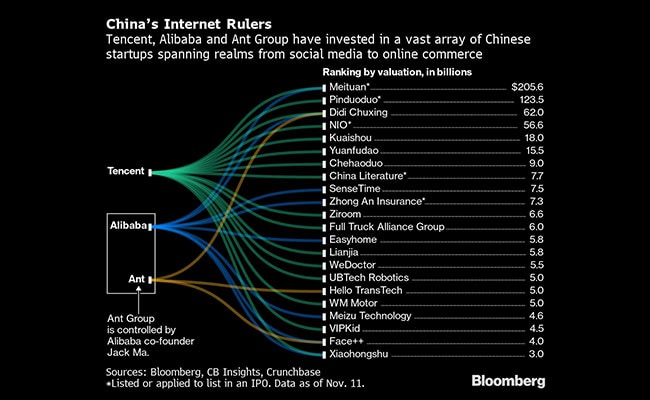 The unprecedented series of regulatory actions since encapsulates how Beijing is now intent on reining in its internet and fintech giants, a broad campaign that’s wiped roughly $200 billion off Alibaba’s valuation since October. The e-commerce giant’s speedy capitulation after a four-month probe underscores its vulnerability to further regulatory action.

Chinese titans from Tencent to Meituan are next up in the cross-hairs because they’re the dominant players in their respective fields. Regulators may focus on delivery giant Meituan’s historical practice of forced exclusivity — particularly as it expands into burgeoning areas like community e-commerce — while investigating Tencent’s dominant gaming service and whether its messaging platform WeChat excludes competitors, Credit Suisse analysts Kenneth Fong and Ashley Xu wrote Tuesday.

“The days of reckless expansion and wild growth are gone forever, and from now on the development of these firms is likely going to be put under strict government control. That’s going to be the case in the foreseeable future,” said Shen Meng, a director at Beijing-based boutique investment bank Chanson & Co. “Companies will have to face the reality that they need to streamline their non-core businesses and reduce their influence across industries. The cases of Alibaba and Ant will prompt peers to take the initiative to restructure, using them as the reference.”

The revamp of Ant — a sprawling financial titan once worth as much as $320 billion — is a case in point. In its ruling, the People’s Bank of China said it wanted to “prevent the disorderly expansion of capital” and ensure that all of Ant’s financial business will be regulated under a single holding company.

Ma’s company will likely have to apply and register to get into any new areas of finance in future — a potential ordeal given the infamously creaky wheels of Beijing bureaucracy. It faces restrictions in every key business — from payments and wealth management to credit lending.

The company’s most lucrative credit lending arm will be capped based on registered capital. It must fold its Huabei and Jiebei loan units — which had 1.7 trillion yuan ($260 billion) of outstanding loans between them as of June — into a new national company that will likely raise more capital to support its operations. And Ant must reduce its Yu’ebao money market wing, which encompasses a self-operated Tianhong Yu’ebao fund that held $183 billion of assets as of the end of 2020, making it one of the largest pools of wealth in the world. 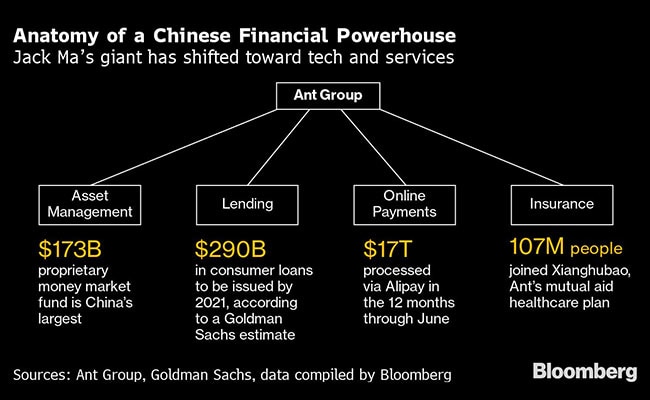 Alibaba appears to have got off lightly in comparison. While the $2.8 billion was triple the previous record set by Qualcomm Inc.’s 2015 penalty, it amounts to under 5% of the company’s annual revenue. Far more insidious however is the threat of future action and the dampening effect it will have on Alibaba.

The fine came with a plethora of “rectifications” that Alibaba will have to put in place — such as curtailing the practice of forcing merchants to choose between Alibaba or a competing platform. Executives also volunteered to open up Alibaba’s marketplaces more, lower costs for merchants while spending “billions of yuan” to help its clients handle e-commerce.

Ant will likewise have to tame its market share grab in payments. Changes to that business, which is fending off Tencent’s WeChat Pay, were among the top priorities regulators outlined. Ant pledged to return the business “to its origin” by focusing on micro-payments and convenience for users.

The most amorphous yet dire threat lies in the simple principle implicit in regulators’ pronouncements over the past few days: that Beijing will brook no monopolies that threaten its hold on power.

The central bank warned in draft rules released previously that any non-bank payment company with half of the market for online transactions — or two entities with a combined two-thirds share — could be subject to antitrust probes. If a monopoly is confirmed, the State Council or cabinet has powers to levy a plethora of penalties, including breaking up the entity.

“Everyone is on the regulators’ radar, and it really depends on each one’s reaction next,” Chanson & Co.’s Shen said. “It’s better to take the initiative to self-rectify, rather than having to go through restructuring ordered by the regulators, which may not have your best interests in mind.”

–With assistance from Coco Liu.