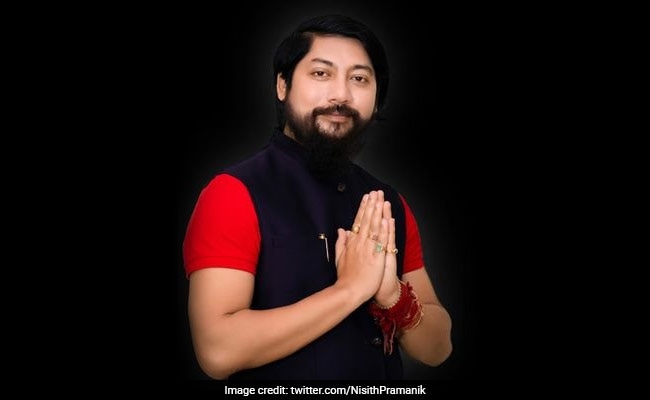 Nisith Pramanik, who was elected in 2019 to the Lok Sabha for the first time.

Prominent tribal leader in West Bengal John Barla and one of the most vocal faces in the party Nisith Pramanik were included in the central cabinet on Wednesday.

Prominent tribal leader John Barla, who has been one of the key architects for BJP’s inroads in the North Bengal region and had recently demanded the creation of a union territory by craving out North Bengal, was inducted into the union ministry on Wednesday

45-year-old Mr Barla, who began his political career as a tea-garden worker in the Terai-Dooars region nearly two decades ago, has come a long way from being a tribal leader to the corridors of power in New Delhi.

Hailing from a tribal family, Mr Barla, has a strong support base among tea garden workers of the region.

His organisational skills first attracted the attention of the local CPI (M) leadership. Although not associated with any political party, Mr Barla and his men had on several occasions voiced their support for the then ruling Left Front.

However, he began his political career as an Akhil Bharatiya Adivasi Vikas Parishad (ABAVP) member in 2007. For a brief period, he flirted with the idea of being a part of the Gorkha Janmukti Morcha (GJM) who were then fighting for a separate Gorkhaland state.

But the bonhomie with the GJM was short-lived as he took on GJM supremo Bimal Gurung and his men in the Terai-Dooars region in early 2010 during the separate statehood agitation.

During that period, he first placed the demand for a separate state for tribal and other backward communities in the Terai and Dooars region.

However, as the winds of change swept Bengal, Mr Barla decided to support Mamata Banerjee-led TMC.

But later on, just ahead of the 2019 Lok Sabha polls, he switched over to the BJP, providing a much-needed heft to the saffron party in the North Bengal region.

The induction of Nishit Pramanik, Mr Barla and alliance with Bimal Gurung helped BJP win in North Bengal where it won seven of its eight Lok Sabha seats from Bengal in 2019.

Mr Barla won the Alipurduar seat with a massive margin of more than two lakh votes.

Mr Barla, who has been vocal on the plight of tea garden workers in North Bengal, recently stoked a controversy when he demanded a Union Territory by carving out parts of North Bengal.

Although his party distanced itself from the idea of bifurcation of the state and warned him, Mr Barla remained unfazed and stuck to his demand and had said he would take up the matter in Parliament.

Known to wield considerable influence in North Bengal, BJP’s Coochbehar MP Nisith Pramanik has been one of the most vocal faces in the saffron brigade in its attacks on the ruling Trinamool Congress.

The 36-year-old Mr Pramanik, who was elected in 2019 to the Lok Sabha for the first time, is given weightage by the saffron party leadership on several issues including spearheading the BJP’s diatribe against the TMC over alleged post-poll violence in West Bengal.

He was also fielded in the assembly elections by the BJP from Dinhata within the Coochbehar Lok Sabha constituency. The MP managed a very narrow win by just 57 votes, but has since resigned his MLA-ship in order to continue as an MP.

Having honed his political skills in the Trinamool Youth Congress, Mr Pramanik was also known as a strong man in Coochbehar district.

He was given a BJP ticket in the Lok Sabha elections despite having joined the party just a few months before in February, 2019.

In his affidavit to the Election Commission before the Lok Sabha election, Mr Pramanik had declared 11 pending criminal cases against him.

Differences between Mr Pramanik and the TMC leadership had emerged during the panchayat elections in 2018 over choice of candidates in several local bodies in the district.

Mr Pramanik was said to be behind fielding of around 300 independent candidates in the panchayat elections, many of whom several had emerged victorious.

The MP was seen accompanying West Bengal governor Jagdeep Dhankhar during his visit to alleged post poll violence affected areas in North Bengal as well as camps in Assam for people who had allegedly fled the attacks.