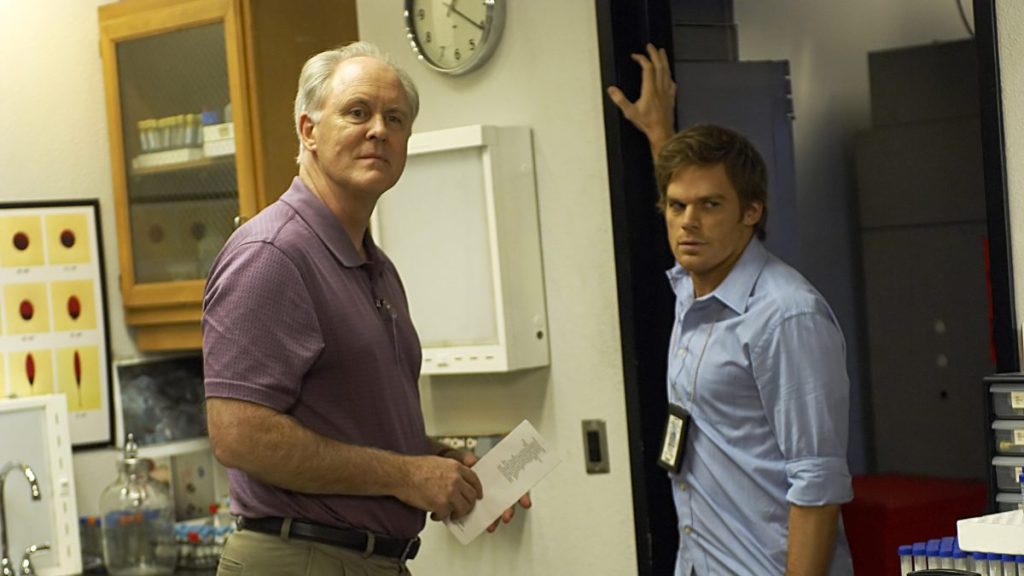 John Lithgow offered new insights into the Dexter revival and his return to the series this morning, after scoring his 13th Emmy nomination.

The two-time Oscar nominee signed on to a revival of the Showtime drama in June, as we told you first. He only was called to set for one day—”in fact, one afternoon.” But when he arrived for the shoot, he was excited to learn about the story the revival is telling.

At the same time, he shared, “there are all sorts of wonderful surprises and callbacks from the first few seasons.”

Lithgow said he first learned of the Dexter revival when Phillips called him, five months before the shoot. “He said, ‘Can you come just to spend one day in The Berkshires?’” the actor recalled. “I said, ‘Of course I can,’ and that’s exactly what it was.”

Dexter was created by James Manos Jr., airing for eight seasons on Showtime between 2006 and 2013. The show centered on the mild-mannered character of the same name played by Michael C. Hall. By day, Dexter worked as a blood-spatter analyst for the Miami police. By night, though, he was a serial killer—one who happened to target other murderers.

Lithgow appeared throughout Season 4 as Arthur Mitchell, the seemingly normal family man, who turned out to be The Trinity Killer. While the character was a fan-favorite, landing Lithgow his fifth Emmy in 2010, he was murdered by Dexter in the Season 4 finale.

Some naturally wondered, then: How might Trinity return in the Showtime revival?

“As all Dexter fans know, we saw the end of the Trinity Killer, so that by definition means it’s a flashback,” offered Lithgow. “It was just wonderful to rejoin that gang—including Michael and Jennifer Carpenter and Clyde Phillips.”

Lithgow earned his 13th Emmy nom for his supporting turn in HBO’s Perry Mason redux, which follows the down-and-out defense attorney of the same name, played by Matthew Rhys, as he takes on the case of a lifetime in 1932 Los Angeles.

Perry Mason was also Emmy nominated, on the craft side, for Outstanding Cinematography For A Single-Camera Series (One Hour) and Outstanding Production Design For A Narrative Period Or Fantasy Program (One Hour Or More). An additional acting nom in the category of Outstanding Lead Actor in a Drama Series went to Rhys.

“Perry Mason…was one of those perfect jobs. I just had a wonderful time doing it,” said Lithgow. “I was happy that Matthew also was nominated for Best Lead Actor because he’s just about the best leading man and leader of a company that I’ve ever worked with.”

The show, based on the character of the same name created by Erle Stanley Gardner, premiered in June of 2020 and was subsequently renewed for a second season. An air date for its second installment has not yet been set.