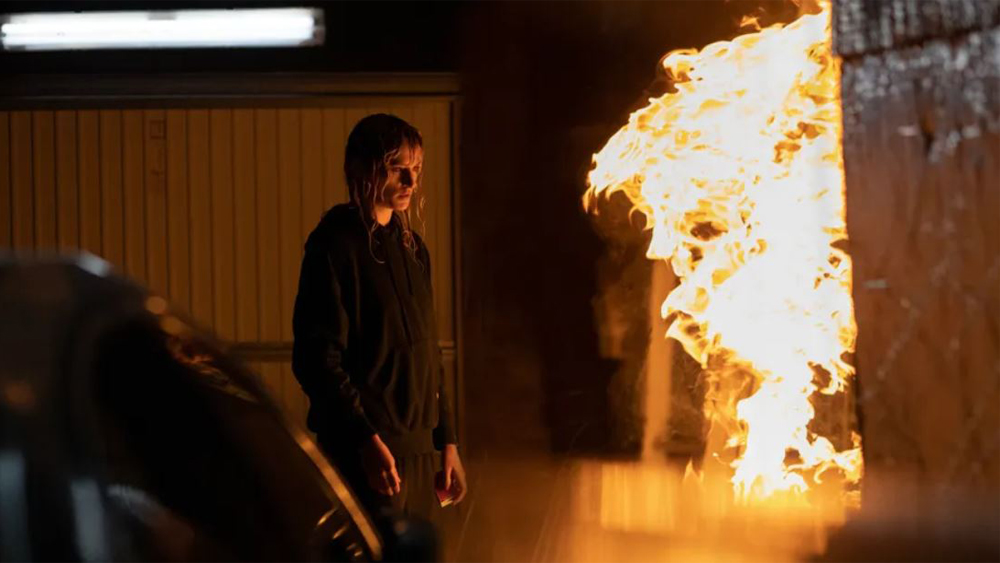 Provocateur Julia Ducournau goes full throttle with Titane, a startling entry into the Cannes competition. While her terrific horror Raw explored gender, power and sexuality via cannibalism, Titane does so with auto(mobile)-erotic symbolism.

Agathe Rousselle is a dynamic lead as Alexia, a car promotions model who, ironically, suffered head injuries in a car accident as a child. The resulting operation involved a good degree of metal, something that appears to have stayed with her into adulthood – and is intrinsically linked to her mentality and sexuality. This might explain her irresistible allure for motor fanatics — or, maybe these are just the type of men who obsess about girls who gyrate on the hoods of sports cars.

Either way, unwanted attention leads to gruesome ends, but that is just the beginning. Alexia has a sexual encounter with/in a vehicle that brings extraordinary consequences, then ends up on the run posing as a man. She finds shelter in a fire station with a chief, Vincent (Vincent Lindon), who has lost his son. Prepare yourself for quite the gender reveal.

With a pulsating soundtrack and a visual aesthetic that alternates between strip club and abattoir, Titane also is a shock-driven genre film that has plenty of violent, squirm-inducing moments. But behind its high-octane exterior there are fascinating themes that Ducournau begins to explore. There’s a touching story of grief and denial as Vincent deludes himself about his long-lost son. Lindon is terrific in this role, welling up convincingly as he struggles to deal with loss while attempting to pretend it never happened. He’s also oozing OTT macho energy, injecting what presumably is steroids while quietly crumbling when no one is looking. Extreme notions of masculinity are visualised when the male firefighters dance to Gabba music, lit like a pop video, aggressive but homoerotic. Ducournau takes that combination to another level in a witty, uncomfortable scene that follows.

Femininity and fecundity are central to the tale, and again they often are represented visually rather than through dialogue (Alexia has long periods of silence). There is much to decode regarding birth, maternity, independence, sexual preference, unconscious bias. While Titane is not as overtly feminist as Raw, having a central female character who is so hard to access — or even like — might be part of the agenda. Titane is ambitious, and not quite in Raw’s league, but it’s never dull. Ducournau has revved up the Cannes competition with an intriguing entry into the race.