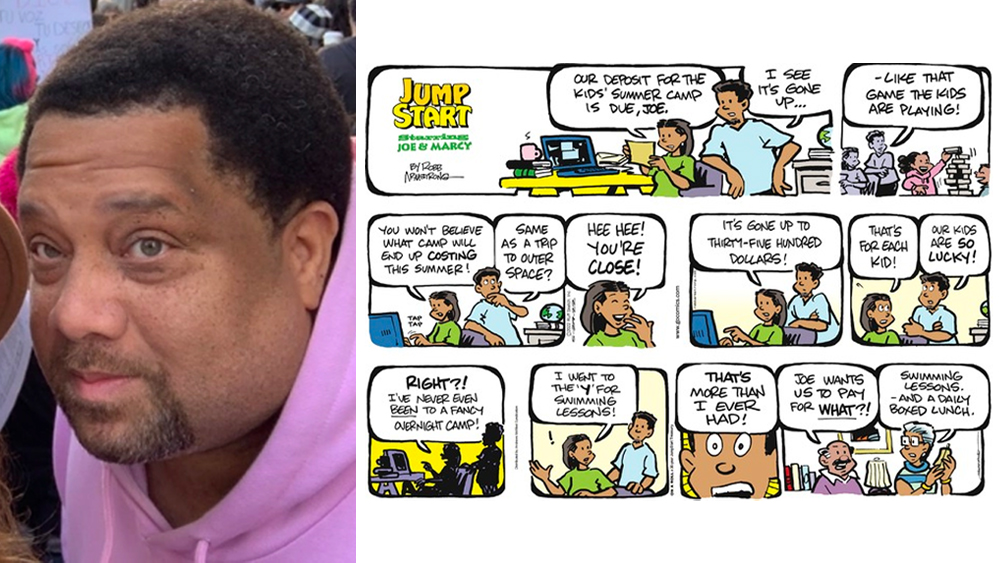 Based on the popular comic strip that debuted in 1989, JumpStart is set in Philadelphia and follows Joe, a cop, his wife Marcy, a nurse, and Joe’s partner Crunchy. Joe and Marcy are young, hip, urban parents with old school values who are willing to sacrifice for their kids and have some laughs while doing it!

Kapital previously teamed with Armstrong and McMeel to adapt JumpStart for television in 2014 when the project, a single-camera comedy with a different writer, was set up at Fox. This is the latest show idea Kapital is revisiting years after its original development. The list includes Women Of the Movement, which became a limited series at ABC after initially being set up at HBO for development with a different writer, and Justin Spitzer’s American Auto, currently a sophomore series at NBC where it was originally developed in 2013.

Armstrong, one of only a handful of Black syndicated cartoonists in the U.S., based the JumpStart strip on his own experiences. “Nearly every married couple I know is like Joe and Marcy, my main characters,” he said in a 1996 interview. “The image of young blacks is so skewed, so false. I don’t know anybody who’s carjacking, playing basketball, rapping. Joe and Marcy and the characters I’ve developed are deep and based on real life.”

Initially carried by 40 papers, Jump Start grew in popularity to appear in over 400 publications, including The Los Angeles Times, The New York Daily News, The Philadelphia Inquirer and The Boston Globe.

Conley is a co-executive producer on the Peacock limited series The Best Man. His series credits also include dramas Queen Sugar, Delilah and Greeenleaf and comedy White Famous. Conley has deep roots in sketch comedy, with writing credits on such shows as All That and Kenan & Kel. He has written a number of films including King’s Ransom and Our Family Wedding. Conley is repped by APA, Brad Kaplan at Link Entertainment and Rob Szymanski at Eclipse Law.

At CBS, Kapital has hit multi-camera comedy series The Neighborhood, which is headed into its fifth season.