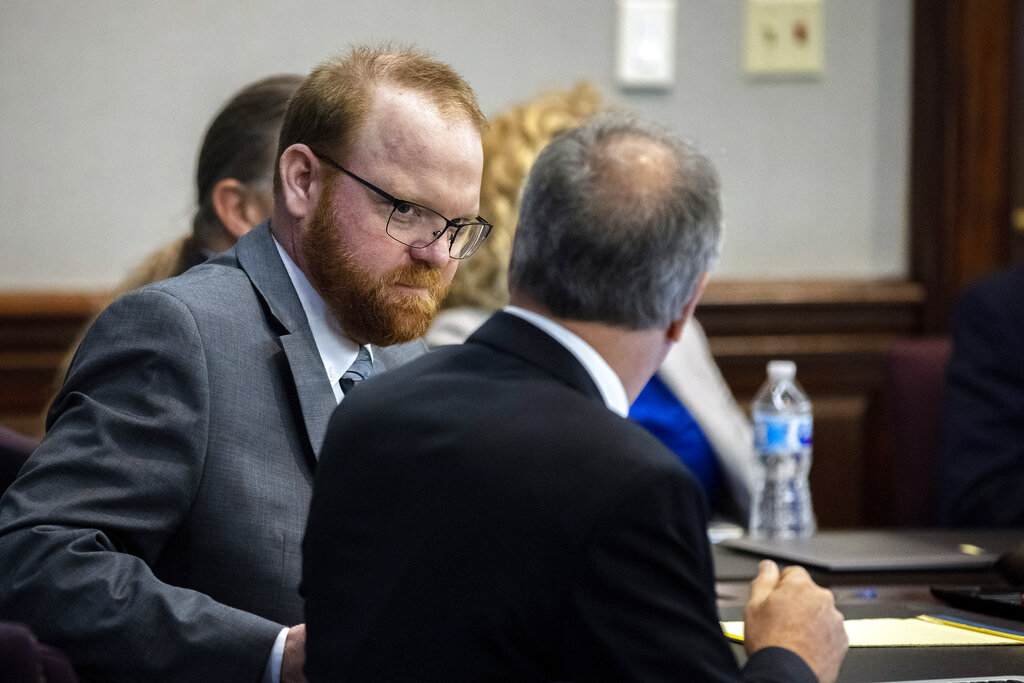 FOURTH UPDATE, Friday,, 12:09 PM PT: Gregory McMichael and his son Travis were sentenced to life in prison without parole in the death of Ahmaud Arbery.

A third defendant, William “Roddie” Bryan, who took the cellphone video of Arbery’s killing, was sentenced to life in prison with the possibility of parole.

The men were charge after a video surfaced that showed the three men tracking down Arbery, as he jogged through the Satilla Shores neighborhood in February, 2020. Bryan had taken the video of the chase, and that footage went viral, drawing calls for arrests to be made in Arbery’s death for an incident that happened months earlier.

The three men claimed self defense and that they were making a citizens arrest, suspecting Arbery of burglary. They each faced a multitude of charges, including murder.

Prosecutors alleged that the men were not simply trying to catch Arbery and that they made assumptions about him because he was Black.

THIRD UPDATE, Nov. 24, 12:53 PM PT: ABC’s 20/20 will present a special two-hour edition on Friday focused on the killing of Ahmaud Arbery and his family. ABC News senior national affairs correspondent Deborah Roberts reports on the trial and interviews with family members, including his mother, Wanda Cooper-Jones It airs at 9:01 PM ET/PT.

CBS’ 48 Hours will take a look at the trial, also with interviews with family members including his mother, with reporting CBS News correspondent Omar Villafranca. The episode airs on Saturday at 10 PM ET/PT.

SECOND UPDATE, 12:13 PM PT: Some of the cable news commentary and reaction to the verdict:

On Fox News, former homicide detective Ted Williams, a lawyer and network contributor, said, “I know that there were a lot of people in the black community that was deeply concerned as to whether a predominantly white jury in Georgia would convict two white men. I’ve got to tell you, when you look at the way the defense played this case out, they consistently kept trying to pull on the sensitivity, there’s crime in your neighborhood. Hey, black people commit crimes. They pulled out every one of the racial insensitivities that they could without clearly using the word race. That went against them, it hurt. There were fair-minded white people. The majority of this jury was white. They were fair-minded white people who took a look at this case and they made an independent decision. So what we as Americans should be proud of in this verdict, these verdicts, is that American citizens working together irrespective of this race thing, that they could come together and that they could make a decision based and predicated on the evidence that was presented to them.”

On CNN, senior legal analyst Elie Honig said, “Ultimately this jury showed us that they went about this case carefully. They took their time. I think they identified and zeroed in on the most important, most relevant pieces of evidence, the 911 call and the videotape, and they came to a very careful, nuanced and just verdict.”

MSNBC’s Joy Reid tweeted, “A well argued case by a really good prosecutor, plus crimes that were clear as day, and I cannot stress enough, how important the message this jury has sent is. They have nullified an unjust and now repealed pro-lynching law. And they have restored at least some faith in justice. And a really important note: the blatantly racist tactics of the defense did not work on a nearly all-white jury. The defense chose moral violence; the jury chose to follow the law. The prosecutor in this case should receive awards.”

UPDATE, 11:54 AM PT: President Joe Biden called the conviction of three men in the death of Ahmaud Arbery “a devastating reminder of how far we have to go in the fight for racial justice in this country.”

In a statement released by the White House, Biden said, “Mr. Arbery should be here today, celebrating the holidays with his mother, Wanda Cooper Jones, and his father, Marcus Arbery. Nothing can bring Mr. Arbery back to his family and to his community, but the verdict ensures that those who committed this horrible crime will be punished.

“While the guilty verdicts reflect our justice system doing its job, that alone is not enough. Instead, we must recommit ourselves to building a future of unity and shared strength, where no one fears violence because of the color of their skin. My administration will continue to do the hard work to ensure that equal justice under law is not just a phrase emblazoned in stone above the Supreme Court, but a reality for all Americans.”

At the time that the video surfaced of Arbery’s killing, then-President Donald Trump called it “a horrible thing” and “very disturbing.”

On trial were Gregory McMichael, 65, son Travis, 35, and their neighbor, William Bryan, 52.

The verdicts in Brunswick, GA were covered by major news networks.

The men were charged after a video surfaced that showed the three men tracking down Arbery, as he jogged through the Satilla Shores neighborhood in February, 2020. Bryan had taken the video of the chase, and that footage went viral, drawing calls for arrests to be made in Arbery’s death for an incident that happened months earlier.

The three men claimed self defense and that they were making a citizens arrest, suspecting Arbery of burglary. They each faced a multitude of charges, including murder.

Prosecutors alleged that the men were not simply trying to catch Arbery and that they made assumptions about him because he was Black.

The McMichaels, armed with weapons, sought Arbery in their neighborhood, and Bryan followed in another vehicle. After they tried to confront Arbery, Travis McMichael fired three shots. Video showed Arbery resisting and attempting to grab his gun, but he was unarmed. There was no evidence that Arbery was involved in burglaries in the neighborhood, prosecutors said.

Outside the courthouse, Rev. Al Sharpton told a crowd, “Brunswick Georgia will go down in history as the place where criminal justice took a different turn.”

Jason Sheffield, attorney for Travis McMichael, said that the verdict was “disappointing and sad,” but “we also recognize that this is a day of celebration for the Arbery family. We cannot tear our eyes away from the way that they feel about this. And we understand that they feel that they have gotten justice today. We respect that, and we honor that, because we honor this jury trial system.”

The defendants’ attorneys said that they plan to appeal.