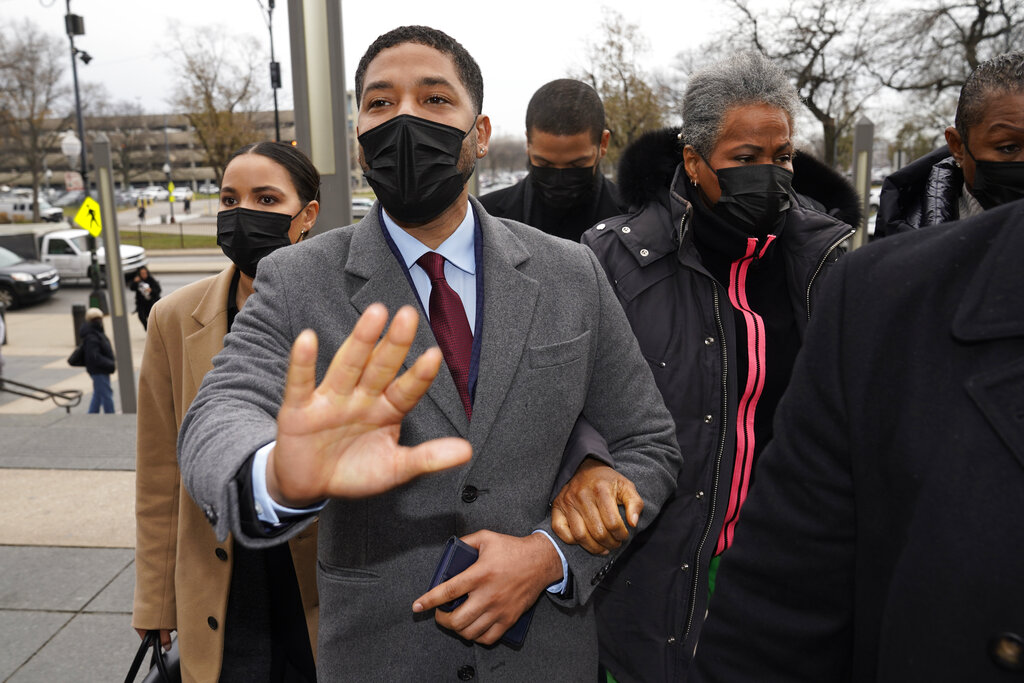 Jussie Smollett insisted to a Chicago courtroom today that the violent attack against him in early 2019 “was no hoax.”

On the stand in his own defense, the ex-Empire star called the assault by men hurling punches, homophobic and racial slurs and “MAGA country,” to be “something out of Looney Tune adventures.”

Asked directly by special prosecutor Daniel Webb in cross examination on Monday if he wanted the police to treat his attack like a “hate crime,” Smollett replied that he “wanted police to solve a crime that had happened to me.”

Holding to his story under Webb’s sometimes intense questioning, the once widely heralded Smollett said that it was “fully false, 100 percent false” that he planned or paid anyone to stage an attack on him.

Facing half a dozen felony charges spiraling out of the alleged hate crime that was soon characterized by Chicago police, politicians and prosecutors as probably a PR stunt, Smollett spoke on Day 5 of his trial to offer his version of what really went down in the cold Windy City early hours nearly three years ago.

The trial started on November 29.

If found guilty by the jury, the actor who played Jamal Lyon for five seasons could be sentenced to up to three years behind bars. An edict of actual incarceration from Cook County Judge James Linn seems unlikely, but isn’t impossible in a trial that has been full of drama and characters straight out of the Lee Daniels and Danny Strong created Fox primetime soap.

Under questioning by his own attorney Nenye Uche Smollett not only laid out the sequence of events of the attack of January 29, 2019, but also the aftermath. “I’ve lost my livelihood,” the performer admitted of being cut from Empire and his music career as his story of that chilly night unraveled under the scrutiny of the cops and the courts.

One theory floated by law enforcement and special prosecutor Webb is that Smollett paid acquittances Abimbola and Olabinjo Osundairo $3,500 to stage a fake curb stomp of sorts because the actor didn’t feel an actual threatening letter sent to Empire received enough attention.

That balloon was effectively shot down by Empire EP Brett Mahoney who told the courtroom that on-set security was increased after the correspondence was brought to the production’s attention. The showrunner for the final seasons of Empire and a longtime vocal supporter of Smollett’s, Mahoney continued in his testimony by claiming the actor declined extra personal security and a driver because “he didn’t want a lot of attention” around the letter, according to the media pool at the trial.

Confronted with apparent contradictions in his story and frustrations felt by the police as their probe intensified, Smollett also claimed on the stand that he decided not hand his phone and all the information in it over to the police in part because CNN anchor and pal Don Lemon had texted him with a warning that the CPD didn’t believe he was really attacked.

The actor also told Ucxhe earlier in the day that he still “didn’t believe it was true” that the Osundairo brothers were his actual assailants, despite what they and the police say.

Smollett was equally blunt in answering why it was his manger and not himself who called the cops after the alleged attack. One, I am a Black man in America I do not trust police,” Smollett said. “I am also a well-known figure and I’m openly gay … the moment i got beat I become a (homophobic slur) who got his ass whooped.”

Court has now wrapped for the day. However, with Webb’s cross examination of Smollett not completed, and closing arguments yet to be conducted, the trial is expected to run at least one more long day before jury deliberations begin.