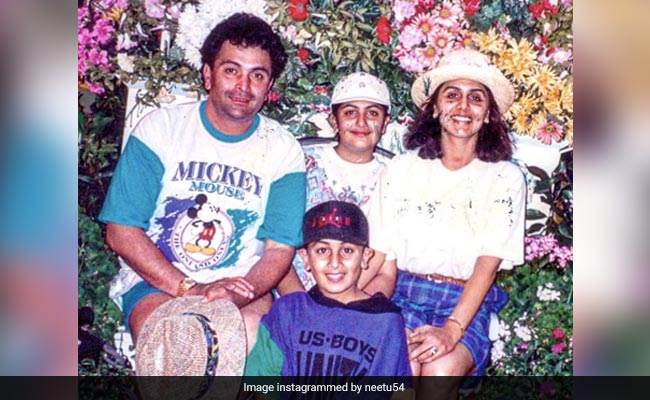 Neetu Kapoor’s Instagram timeline is filled with throwback gems. Be priceless moments featuring herself and late husband, veteran actor Rishi Kapoor or frames from Ranbir Kapoor’s childhood, Neetu Kapoor shares it all with her fans online. No, we aren’t complaining. In fact, we love it. Now, she just made our Sunday look much better by sharing a priceless moment from one of their family vacations. Here, Neetu Kapoor, Rishi Kapoor are standing next to their children, Riddhima and Ranbir. Don’t miss the cute smile on little Ranbir’s face. The family of four is posing against a floral decoration with summer hats on. Neetu Kapoor, in the caption, wrote, “Time fliessss …… Only memories…..”

Neetu Kapoor, on Rishi Kapoor’s birth anniversary last year, pullout out a major blast from the past moment to mark the day. Here, the two are seen smiling ear to ear for the lens. In the caption, she just wrote, “Happy birthday.”

It is safe to say that for Neetu Kapoor, 2022 was all things amazing. From making a comeback to the big screen with JugJugg Jeeyo to becoming a “dadi”, fans have seen Neetu Kapoor celebrating the milestones with utmost joy and love. On the day, when Ranbir Kapoor and Alia Bhatt announced the arrival of their little bundle of joy, Neetu Kapoor reshared Alia’s post and wrote, “Blessings.” The original statement by the couple read, “And in the best news of our lives:- Our baby is here…and what a magical girl she is. We are officially bursting with love – blessed and obsessed Parents! Love, love, love Alia and Ranbir.”

Oh, and, did you know Neetu Kapoor – the “wise and wonderful dadi” – choose the name of her granddaughter? Alia Bhatt, at the time sharing their first family portrait, wrote, “The name Raha (chosen by her wise and wonderful Dadi) has so many beautiful meanings…Raha, in its purest form means divine path in Swahili. She is joy, In Sanskrit, Raha is a clan. In Bangla – rest, comfort, relief. In Arabic peace, it also means happiness, freedom and bliss. And true to her name, from the first moment we held her – we felt it all. Thank you Raha, for bringing our family to life, it feels as though our lives have only just begun.”

In terms of work, Neetu Kapoor will be next seen in Milind Dhaimade’s next. The film also stars Sunny Kaushal.

Farhan Akhtar And Shibani Dandekar Fly Out Of Mumbai