Kareena Kapoor Is “Off To Work” With Her “Boy” Jeh Ali Khan. See Pics 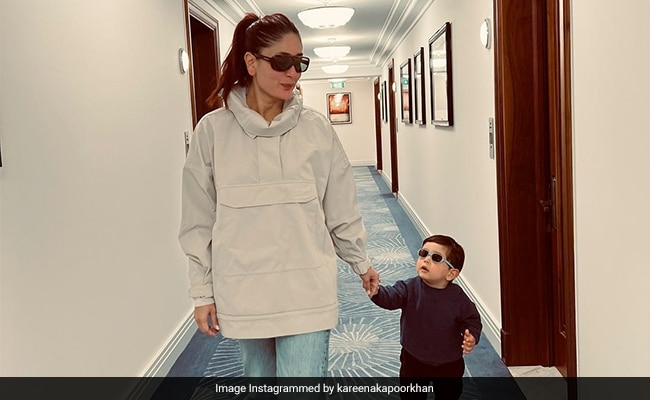 Kareena Kapoor, who is currently in London to shoot for Hansal Mehta’s film, recently shared an adorable picture with her younger son Jeh Ali Khan and we cannot get enough of it. On Thursday, the actor shared two amazingly cute pictures of herself with Jeh and wrote, “Off to work with my Boy… but a quick Pose before we leave… Jeh baba Kaam pe chalo (Jeh let’s go to work).” In the picture, the mother-son duo can be seen sporting casual outfits and completing their look with cool glasses. Kareena’s post, which garnered over two lakh likes in less than an hour since it was uploaded, also caught the attention of her BFF Amrita Arora and sister Karisma Kapoor. Reacting to the post, Amrita wrote, “Jeh Baba” with many red hearts. Whereas, Karisma’s comment read, “My loves.”

Kareena’s sister-in-law Alia Bhatt too commented on her post. She wrote, “superstars” with red heart emojis.

Kareena’s fans too flooded her comment section with their reactions. One of them wrote, “The caption and you both” with star-eyed and heart emojis, while the other one wrote, “Uff the slay.” Many others dropped star-eyed, fire and heart emojis on the actor’s post.

Kareena Kapoor flew down to London a few days ago. Ever since the actor has been sharing many posts to keep her fans updated. Recently, she shared a set of pictures of herself from the woods in London. Sharing her pictures, the actor wrote, “Freezing in the Forest but must Pose for you guys.” Her caption was accompanied by the hashtag Forest Fashion.

Check out her pictures here:

Before that, the actor shared another post, where she revealed details about her upcoming project. Sharing a picture of herself from London, the actor wrote, “Day 1. Film number 67 or 68? Chalo guys let’s do this.”

Kareena Kapoor, who was last seen in Aamir Khan’s Laal Singh Chaddha, will be soon seen in The Devotion Of Suspect X, also starring Vijay Varma and Jaideep Ahlawat.