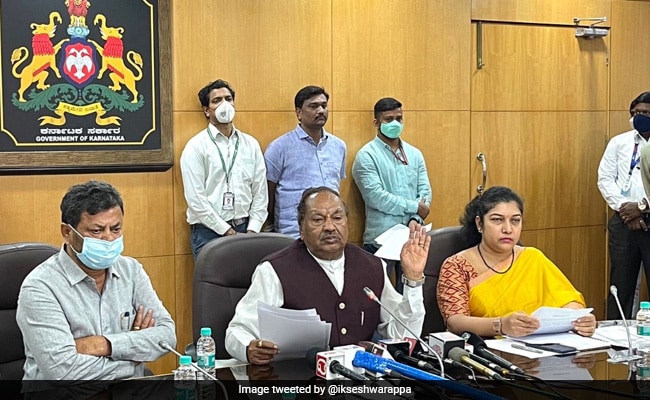 “I don’t want to cause any trouble for my seniors and well-wishers in the party,” he said.

BJP stalwart and Karnataka minister KS Eshwarappa, caught in a huge controversy following allegations of corruption and a role in the suicide of a contractor, today asked his supporters not to worry as he “will be back”. In a massive show of strength before his resignation, a huge convoy of cars accompanied him as he drove to the capital Bengaluru to resign. In his constituency Shivamogga, supporters protested against his “forced resignation”.

“I don’t want to cause any trouble for my seniors and well-wishers in the party. So, I am meeting the Chief Minister in the evening to submit my resignation. I am also confident that I will come out clean.” he told reporters. Mr Eshwarappa will meet the Chief Minister at 8 pm.

On being asked about Congress MLA Priyank Kharge’s charge of other people too involved in the ‘40% cut money scandal’, Mr Eshwarappa said, “Why doesn’t he (Mr Kharge) name even one of the people behind this scandal?”

Contractor Santhosh Patil, who died on Tuesday, accused Mr Eashwarappa, who handles the Rural Development and Panchayat Raj portfolio, has named the minister in his last phone messages, saying he was “solely responsible” for his death. In his last WhatsApp messages to friends and political leaders, he had reportedly marked Prime Minister Narendra Modi as well.

Mr Eshwarappa, he alleged, had demanded “40 per cent cut money” to clear a Rs 4 crore bill for work he had done for the Rural Development department.

Santosh Patil had reportedly been given an oral instruction by the minister for a Rs 4-crore project in the rural parts of the state. But even after 18 months, he had not received any payment for the job, to complete which, he had to borrow money and even sell his wife’s jewellery.

The state’s powerful contractor lobbies have admitted that there is an existing culture of commission, which goes well beyond 40 per cent.

Karnataka BJP strongman BS Yediyurappa, standing by his old friend, has expressed confidence that he will come out clear from all allegations and return as a minister soon.

Mr Eshwarappa’s declaration came hours after Chief Minister Basavaraj Bommai assured his continuing as part of the cabinet. The decision, he told NDTV in an exclusive interview, will depend on the outcome of the preliminary inquiry. Mr Eshwarappa was also not willing to step down, and expressly told reporters that if “they are asking for my resignation, I won’t give one”.