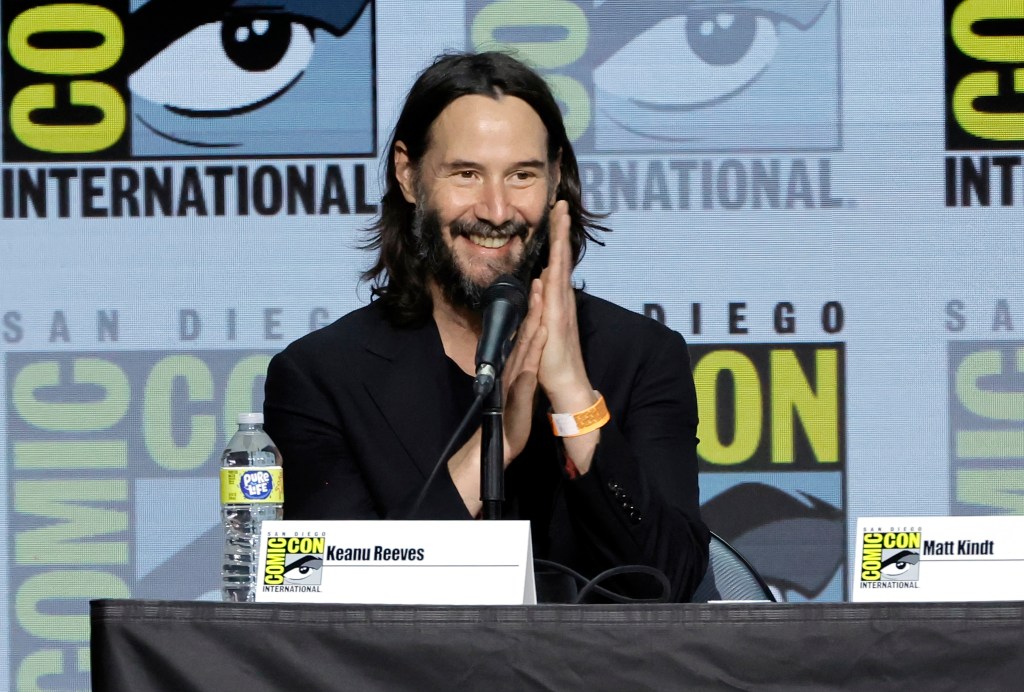 Keanu Reeves, one of Hollywood’s biggest action stars, was at Comic-Con on Friday talking about BRZRKR, his comic from Boom! Studios. The book is written by Reeves and Matt Kindt with artist Ron Garney and follows half-god/half-man B. as he wars through the ages.

Here’s the official summary: The man known only as B. is half-mortal and half-god, cursed and compelled to violence — even at the sacrifice of his sanity. But after wandering the world for centuries, the Berzerker finally might have found a refuge: working for the U.S. government to fight battles too violent and too dangerous for anyone else. In exchange, B. will be granted the one thing he desires – the truth about his endless blood-soaked existence, and how to end it.

Netflix is working on a BRZRKR film adaptation that Reeves will star in and produce. There’s also a spinoff anime series coming to Netflix, with Reeves voicing the main character.

Panel moderator Coy Jerdenau mentioned that it’s one of the first times Hall H has featured a comic panel that didn’t revolve around Marvel or DC. When the panel started, Boom! Studios showed clips from various pages of the book, with Reeves providing voice over.

“I had this idea of a character who can punch you through the chest and rip arms off who was cursed with violence [and is] trying to figure out who they are and reclaim their humanity,” said Reeves. “I met with Boom! in 2017 and pitched it. They agreed to try to put it together, and it took a couple of years.”

Co-writer Kindt talked about what drew him to the project. “When Reeves pitched the idea, it’s the twist at the very end that caught my attention and made me want to get involved.” Said BRZRKR artist Garney: “Who doesn’t love punching someone through the chest?! It wasn’t just a story about violence, but there are so many layers. It felt so epic. It really is a huge exercise in what you can do with a comic, so I was like, How can I turn this down?’”

Gagnon and Harburn, the team from Boom! Studios, met with Reeves and wanted to put together a strong team to work on the story. “We were outlining the story when we found Rom Garney and others. We have a lot of respect for these creators, so we went out and found some of our favorites.”

Reeves added: “The people at Boom! curated my experience in a special way. They brought together a team to help this be more enjoyable. But when the first issue was in my hand, I thought it was f*cking Christmas! When I read it, I thought it was fantastic. Some of the best creative days off my life.”

Gagnon had hoped that the book would help comic shops by bringing new fans into the comic book world. “A lot of the work done on the book is in the hopes of supporting comic book shops and readers. This book brought new readers and new fans to help these shops because the readership is supporting this book, thus comic shops.”

Tomlin, who will write and direct the BRZRKR film for Netflix talked about why he wanted to work with Reeves. “I love Keanu Reeves with all my heart,” he said. “His characters mean a lot to me. The time I’ve spent with him is something I honor. The inspiration for the film isn’t just his other movies but films like The Fountain and Tree of Life.”

Reeves said he watched some anime growing up in Toronto but “didn’t even know what it was. It wasn’t until I worked with the Wachowskis [on The Matrix]; they made me watch Akira and Ghost in the Shell,” he said. “I’m not up to date on current stuff, though. In terms of the action and storytelling and incorporating anime, I find that world can encapsulate a Trojan horse that can bring us into the heart of who we are. It has scale and projection, and impacted me as a storyteller.”

The BRZRKR comic series will run through 2024 and the story universe will have a spinoff novel written by a famed author — though it wasn’t revealed who. Random House has the rights to the story and will publish the book. No date for when that will drop.