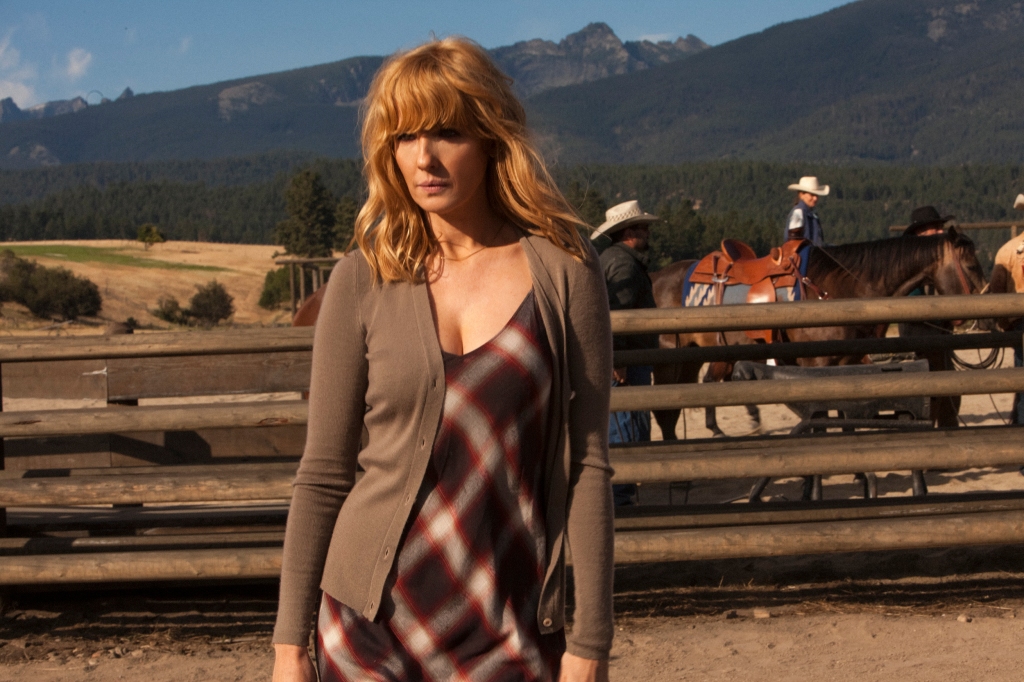 Yellowstone returned to Paramount Sunday with John Dutton (Kevin Costner) as governor and worries that his time away from home could have a negative impact on the ranch he loves so dearly. Here, star Kelly Reilly (Beth Dutton) talks about her character’s steadfast commitment to her father, her relationship with brother Jamie (Wes Bentley), and how fans can’t get enough of Beth and Rip (Cole Hauser).

DEADLINE Let’s start with that quiet look on stage between Beth and Jamie. What was going on there?

KELLY REILLY Yeah, sort of two tigers, isn’t it? I mean, she says to him, ‘You’re in my prison now.’ How Beth and Jamie are in the fold together sort of feels like early days and now they’re both with their father as he becomes governor and Jamie has to play ball in Beth’s world. And she says to him, ‘You will do as he asks you to do.’ And it goes against every fiber in Jamie’s body to do what he’s being asked to do. Is it awful? He is like a prisoner in this family and I think at any opportunity, Beth will remind him of that in her most eloquent way.

It took a long time for John to say anything at his swearing-in ceremony. He doesn’t really want to be there, does he? But neither does Beth, does she?

REILLY No, not at all. They are both incredibly reluctant to be there. I don’t think either one of them have any interest in this world. However, and it is a big one, Beth understands, as does John, that this is necessary in order to shut down the building of the airport. And the only way that they can enforce real change is for him to become governor. To see John and Beth in this position of power, perhaps squirming in it, it’s not how they play. They’re dirty in the way they do their dealings in business and now they’re having to toe the line a little bit and do things properly. It’s quite fun to see Beth not quite able to manage that.

I feel like we’re going to learn that maybe Jamie is the best guy for office and that all his warnings will prove to be correct.

REILLY That’s an interesting theory. Every character in this show seems to have many different angles. From another angle, Jamie was absolutely in cahoots with his father, and with the hit was supposed to kill his real father (Will Patton) and kill Beth and Casey. So yeah, depending on what angle you want to look from, you are absolutely right. I think what’s so great about the writing is that both arguments get presented and it’s up to the audience to make up their mind. What’s so great is when we all disagree.

Why was it so important to show that flashback with Beth and Rip when they were young?

REILLY I think, for me, Beth is very haunted by her past and there seems to be a lot of that rising up in her this season, which I’ve actually enjoyed because you get to see a side of Beth that understands consequence. Most of the time she doesn’t. She’s fearless and reckless. But with Rip, I think she understands her behavior. I think she gives herself a very hard time when things come down to the crunch with people she loves. I think she feels things incredibly deeply and feels she wronged him. I think it haunts her.

She still seems to carry so much anger. Rip told Beth she needed somebody to fight with. Is that what it’s coming down to? She needs that?

REILLY I think there’s truth to that. I think she doesn’t know any other way. She’s had to fight her whole life and I think that is in her DNA. I don’t think she’s someone who spends too much time in wellness, thinking how can she live peacefully or happily when she’s consumed with her mission to save her father’s ranch. I always ask myself, why does she feel like she has to do this? It feels like some sort of penance that she puts on herself because she took his wife from her. And in that terrible accident, I think she carries a tremendous amount of shame and guilt and responsibility. And so it’s almost like she’s dedicated her life to serving him and making him happy.

People seem so heavily invested in the relationship between Rip and Beth.

REILLY Yeah, people really love these two characters. You just never know when you start working on something. I love what was written down and so did Cole. Together, we just realized that what we had was pretty much gold dust with the way it was written. And then it’s just gotten deeper and more is prevalent in people’s minds and it’s become about these two, Rip and Beth. It’s fascinating to watch and fun and surprising. It’s such a lovely love story between these two very broken, supposedly tough characters who have a place to be vulnerable with one another and to show sides of themselves that they don’t get to show anywhere else. And there’s so much romance.

The moment when he’s on the hill and makes the comment about Rome burning. Is that a warning of where you’re going this season? What John is missing back at the ranch?

REILLY Yeah, I think it’s really in danger. And can we stop the fire? I mean it’s already on. That’s one of the things when we’re filming out in Montana, every summer there are fires everywhere and it just feels like there’s sort of this ominous quality of nature. We’re worried about the whole ranch being turned into a cement city, people taking it and it all being about money and losing this way of life. But there seems to be this other force of nature, literally a force of nature that is in coming toward them. Beth doesn’t know, and I think she’s worried whether or not that’s a symbol, like you said, or whether that’s really a threat. Threats are coming from every angle this year.

What’s going to happen with the kid Carter (Finn Little), who’s grown so much. Will we see a lot more between him and Beth this season?

REILLY You see a lot more of Carter and you see him observing the world that he’s in. Beth’s pretty busy this year. There’s some nice moments between us, but I think Taylor Sheridan is saving Carter and Beth’s relationship. I think things like that really take time with her. I don’t think she can help him. I think she sees Rip in him. I think she sees a kid who has nothing and she wants to help him, but I don’t think she’s trying to be his mother.

What’s it like for you when the show is back on the air? Does the hype find you?

REILLY I’m working in London right now and I’m completely immersed in the role I’m playing and the job I’m doing right now and. I think here they’re still on season three, so it’s a very different experience. But you know, you can’t help but see it on social media. I try not to look too much because it can be a bit overwhelming, but I sense it, I feel it. And when I’m back home in America, where I live, I feel it a lot more. I feel that sort of build up. I get lots of messages from friends and people who are just really excited about the new season. So I wish I was there. I wish I was there to experience that. With Covid we weren’t able to have premieres or screenings. And now this year, of course they all are and I’m not able to be there because I’m working. But it’s always exciting to work really hard on something and then let it go.