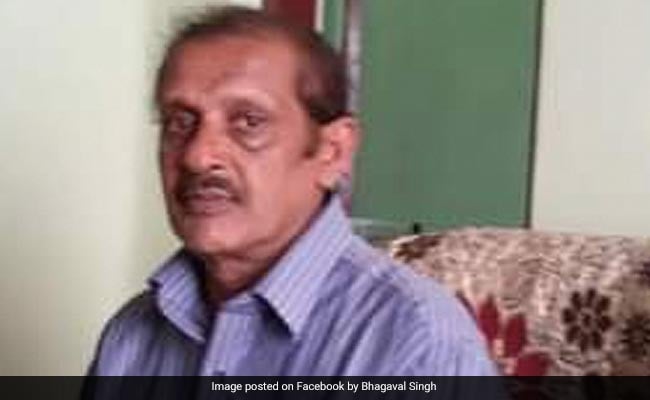 Bhagaval Singh, 60, was linked to the CPM, but the party denied he was a member.

Bhagaval Singh, one of the three persons in Kerala accused of torturing and killing two women and possibly eating their flesh in “human sacrifice”, often posted poetry on Facebook, and described himself as “self-employed in alternative medicine”.

Bhagaval Singh, 60, was well-known in the town as a social worker, always polite.

The traditional healer and poet, known to be “mild-mannered” by friends and neighbours, played a part in the grisly murders that have stunned the nation. The village Elanthoor in Pathanamthitta is in shock, replaying their interactions with the family, over and over.

The main accused is Muhammad Shafi, described as a “sexual pervert” and sadist who trawled the net for the victims and also convinced Bhagaval Singh and Laila to perform the “human sacrifice” to end their financial troubles.

A large crowd gathered around the home of Bhagaval Singh and his wife Laila as the police investigated what could possibly be the worst killings in recent times.

“The couple was well educated, well to-do in our community. Nobody had a clue of this mindset. They did not seem to be the sort to stoop to such levels,” said Usha, a neighbour.

He belonged to a respected family of healers.

“We never heard him speak to anyone in an agitated manner. His forefathers were very famous traditional masseurs. In the old days, people used to go to them instead of hospitals,” said Anandan, another neighbour.

Bhagaval Singh was linked to the CPM, but the party denied he was a member. Locals said he was active in party work in the area.

His Facebook page was full of short form poetry labelled “Haiku”, a Japanese form of poetry in which 17 syllables are arranged in three lines containing five, seven and five syllables.

Singh posted last on October 6, more than a week after the trio allegedly killed Padma, the woman seen on CCTV footage walking into their house.

He posted two cryptic poems in Malayalam. The last one read: “A furnace, blacksmith’s wife at work, her body bent over.”

Bhagaval Singh’s bio says he studied at Kerala University and St Thomas College, Kozhencherry. His own descriptor said this: “Self-employed in the field of alternative medicine and Marma system of therapy which is well spread and accepted by people. I plant and nourish various species of herbs of great medical value. Under the supervision of academic personnel we treat accident born complaints, various types of arthritis, paralysis, born setting and after cure (sic).”

Laila was his second wife. Singh had a daughter from his first marriage and their son, both working abroad.

The police say Shafi contacted Bhagaval Singh through Facebook, pretending to be an occult expert who could make him rich. Shafi allegedly lured the two victims, Roselin and Padma, to Singh’s house.

Roselin was murdered on June 6 and Padma on September 26, according to the police. Their bodies were hacked to pieces and buried in the backyard of the house in Pattanamthitta.

When investigations led to Bhagaval Singh’s house, the couple allegedly confessed to the murders. Singh reportedly showed where the women’s remains were buried.

Padma was allegedly tortured with a knife and strangled. Her throat was slit and the body hacked into 56 pieces. Roslin was knifed in her private parts and killed. Bhagaval Singh is accused of chopping her breasts. The police said they are investigating the possibility of cannibalism.

The police are also investigating if Shafi is a serial killer. He was described as “a psychopath and a sexual pervert who delights in cruelty”.