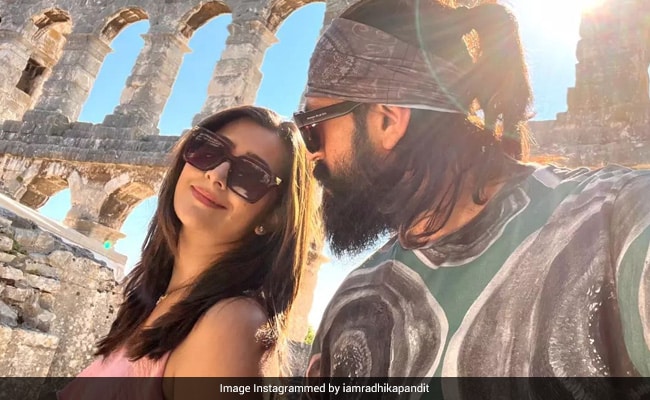 KGF star Yash and his wife Radhika Pandit are having the time of their life as they holiday in an undisclosed location. The couple has now shared new pictures on their Instagram handle and we can’t get enough. Radhika shared several pictures and captioned it as, “This old town has our (heart emoticon) Did someone say Italy? Nope, it’s not!!”. In the images, the actress looks pretty in a pink jumpsuit while Yash looks uber cool in t-shirt and cargo pants. Both have completed their look with black sunglasses.

Yash has also shared a picture and a video on his Instagram handle and captioned it as “Simple Joys of Life”. In the image, Yash and Radhika Pandit can be seen buying some cherries while in the next, Yash can be seen feeding a bird from his plate.

A few days ago, Radhika Pandit shared several pictures on her Instagram handle. In the images, the couple can be seen exploring new places and enjoying delicious meals. In the caption, Radhika wrote, “In the world of Cheese and Gelato.. where the sun hangs out till late! Not reachable at the moment.. lost in a far far away land”. Take a look at the post below:

Meanwhile, Yash and Radhika Pandit got married in a grand ceremony in 2016 after dating for several years. The couple is now parents to two children – daughter Ayra and son Yatharv.

On the work front, Yash was last seen in the blockbuster hit movie KGF: Chapter 2. Next, he will be seen in the third part of the franchise but the makers are yet to start the shooting of the film.