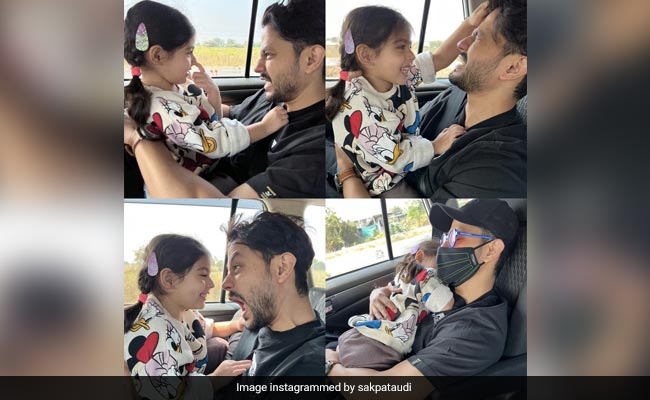 Kunal Kemmu and Soha Ali Khan are known for giving major parenting goals. The couple always shares glimpses of their family through social media. Kunal Kemmu on Sunday, shared a “wholesome” reel on his Instagram account where he is seen spending time with his beloved daughter Inaaya, wife Soha Ali Khan as they take a walk in a forest. Sharing the post on instagram Kunal Kemmu wrote: “Just a fun wholesome day with my favourites,” along with a heart emoji. The video also had Crusin played in the background and also featured Kunal Kemmu’s dogs.

Kunal Kemmu barely misses an opportunity to celebrate Inaaya. Kunal Kemmu shared adorable pictures of them together. Recently, he posted photos where Inaaya can be seen resting her head on his shoulder. Sharing the post, Kunal Kemmu wrote, “To the stories you tell me and the way you lay your head on my shoulders.” He finished with a red heart emoji.

Kunal Kemmu and Soha Ali Khan got married in a intimate ceremony on January 25, 2015 and later welcomed their first child, Inaaya Naumi Kemmu. Kunal Kemmu made his debut as a child actor in Sir and now has been a part of various films like Golmaal Again, Kalank, Malang, Lootcase, among others and he is now gearing up for his upcoming project, for which the details have not been disclosed. Soha Ali Khan has featured in films like Ghayal: Once Again, Sound Proof, Saheb and many more.