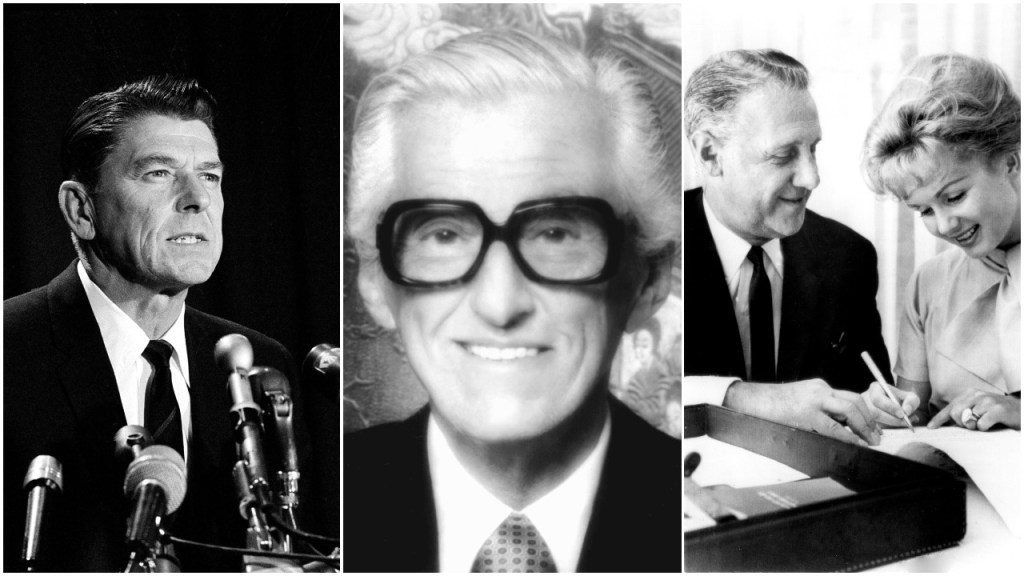 EXCLUSIVE: The story of how three young men from the Midwest – Ronald Reagan, Lew Wasserman, and Sidney Korshak – became the most powerful man in the world, most powerful executive in Hollywood and the most powerful lawyer in the country – is being explored in a new podcast documentary series.

Glitter and Might comes from C13Originals and Shawn Levy, the author behind The Castle on Sunset: Life, Death, Love, Art and Scandal at Hollywood’s Chateau Marmont.

The show will explore the trio’s relationship and how they changed the entertainment industry and the country itself.

Beginning in the 1940s, it dives into how Wasserman created the modern talent agency, liberated actors from film studios, and invented the made-for-TV movie as well as steering Ronald Reagan from the B-movie pool at Warner Bros. to the presidency of the Screen Actors Guild, a career as a corporate spokesman, the governorship of California, and, ultimately, the White House.

Netflix & 21 Laps Producing A Feature Adaptation Of ‘The Poet’

Deeper yet in the shadows, Sidney Korshak – a lawyer for labor unions, gangsters, and casinos – abetted Wasserman’s plans for decades. Together and separately, these three men wove a tale of ambition, calculation, corruption, and metamorphosis.

The series will launch this fall and is the latest original for the documentary division of Audacy-owned podcast studio Cadence13, which makes series such as Root of Evil, Relative Unknown and Once Upon A Time… In The Valley.

“The most remarkable part of Ronald Reagan’s political career,” said Shawn Levy, “is that it was largely fostered by forces that had nothing to do with what we normally think of as ‘politics.’  As wielded by men like Lew Wasserman and Sidney Korshak, power could seep into any place where there was a vacuum and something to be gained by filling it, whether that was the movie industry, the casino business, the upper echelons of organized labor, or even the White House. I’m thrilled to join forces with C13Originals to tell this incredible story.”

“Lew Wasserman is still one of the most admired pioneers and moguls to ever come out of Hollywood, and his rise to power and helping to shape and influence a young Ronald Reagan is a fascinating story C13Originals is thrilled to tell,” added Chris Corcoran, Chief Content Officer, Cadence13 and Executive Producer, C13Originals. “Having Shawn Levy guide us through this story with his incredible knowledge and access to this critical time in the history of Hollywood’s evolution is beyond exciting.”