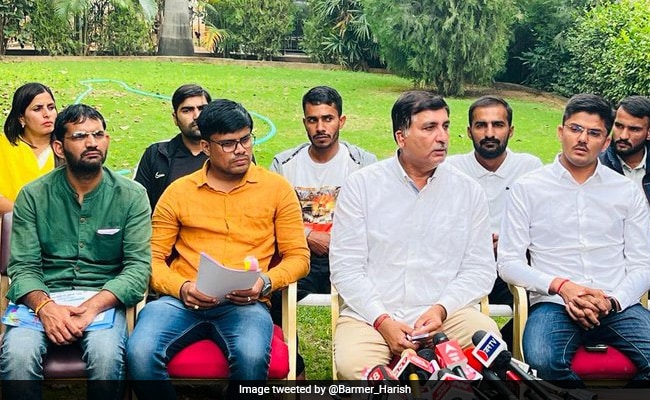 MLA Harish Chaudhary at a press meet in Jaipur where he attacked the Chief Minister.

Rajasthan Chief Minister Ashok Gehlot’s camp, which recently scuttled the Congress leadership’s decision to move him to a national role, is witnessing disquiet within, after sticking by him through Sachin Pilot’s constant rebellion.

Former minister Harish Chaudhary today threatened to launch an agitation if his party’s government does not change rules that “allow former defence personnel to dominate the quota for Other Backward Classes (OBC)” due to a decision of the previous BJP government in 2018.

“It has cut into the OBC quota. Quota for former defence personnel should be separate,” Mr Chaudhary, MLA from Baytu in Barmer district, said at a press conference.  OBCs form more than half the state’s population.

“I am saying it clearly that the CM is responsible; the bureaucracy has nothing to do with it. I am a transparent person and I cannot understand why the CM deferred a decision on this,” he added.

With a demand that a cabinet meeting be called again for a decision on “rectifying the discrepancies”, Mr Chaudhary also met with state Congress chief Govind Dotasra.

For Ashok Gehlot, who’s been promising to resolve the issue, this outburst comes at a time when his younger rival Sachin Pilot has again raised the demand that the “climate of indecision be ended”, meaning the leadership question.

On the quota question, Mr Pilot’s loyalist MLA Mukesh Bhakar tweeted today: “If the government does not take a quick decision in the interest of OBCs, then the Chief Minister himself will be responsible for the atmosphere that will be created in the state against the government and the party. For me, getting rights to the youth is more important than any post.”

But Harish Chaudhary’s outburst is.

Mr Chaudhary, who, as Punjab affairs in-charge, has a reporting line with the national leadership, has stood with Mr Gehlot amid the protracted factional rift.

On the quota within a quota, he’s been upset for some time, and directly questioned Mr Gehlot in a tweet yesterday too. “Chief Minister Ashok Gehlot, I am shocked; what do you want?” he said in the tweet, in Hindi, adding: “I assure the OBCs that I will fight whatever battle has to be fought on this issue.”

Mr Gehlot had, in September, promised that the “anomalies” would be removed. “This issue will be resolved at the earliest by taking departmental and legal opinion so that recruitments do not get stuck in judicial process,” he had tweeted.

That assurance came after community organisations — chiefly the OBC Aarakshan Sangarsh Samiti — held protests and Mr Chaudhary, in August, also participated in a dharna in Barmer.

The nub of the agitation is a 2018 circular by Vasundhara Raje’s BJP government, which made a key change to the 12 per cent quota for ex-defence personnel. While earlier this quota was over and above other reservations, such as for Dalits and OBCs, the 2018 circular said the ex-servicemen quota would now run across all categories on the basis of overall merit. Since about 55 per cent of the state’s population belongs to OBCs — and a large number of the ex-servicemen come from these communities — ex-servicemen take a large chunk of the 21 per OBC quota.

The agitation for separating the quotas has been gaining strength as thousands of vacancies in government jobs are up for the taking in the next two months. State elections are due next year.

Rajendra Chaudhary, a member of the OBC front, said, “There are 1.5 lakh government jobs coming up — teachers, constables and others. If this discrepancy continues, youngsters from OBCs will lose their chances.”

Harish Chaudhary’s direct threat comes after multiple shows of strength by Ashok Gehlot over the past three years.

Two months ago, when the Gandhis were said to be keen on making Mr Gehlot the party’s national chief, his loyalists defeated the leadership’s insistence that he vacate the Chief Minister’s chair under the ‘one person-one post’ convention. Another veteran, Mallikarjun Kharge, stepped in to become party chief instead.

Mr Chaudhary stuck with Ashok Gehlot in the deeper crisis of 2020, too, when Sachin Pilot camped with some MLAs in a Delhi hotel and pushed the party to the brink demanding he be given the chair under the split-term promise made at the time of the 2019 elections. Mr Pilot lost the deputy chief minister’s post and the state unit chiefship.

In 2021, when Harish Chaudhary was in the middle of Punjab Congress’s leadership change ahead of polls there, he shot down suggestions for a similar change in Rajasthan. “There is a difference between Rajasthan and Punjab. The MLAs of Rajasthan are with Chief Minister Ashok Gehlot,” he’d said, contrasting it with Capt Amarinder Singh having lost party MLAs’ support.