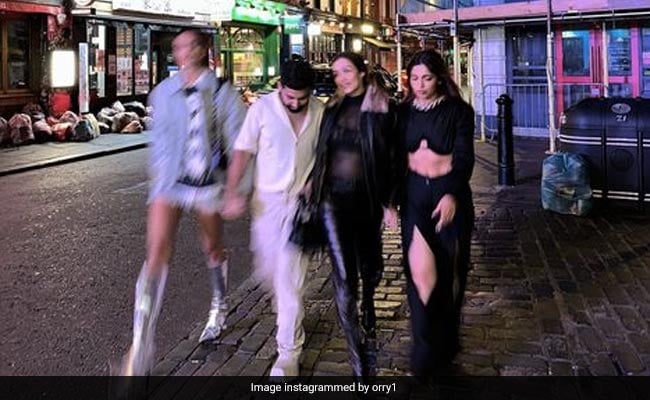 Orhan Awatramani has treated his Insta family to blurry but amazing pictures of Malaika Arora and Bhumi Pednekar. On Tuesday, he shared pictures in which Orhan can be seen walking on a street with Malaika and Bhumi. The images are blurry but we can see both actresses twinning in black outfits. Orhan tagged the actresses, and in the comment section, he wrote, “Late night conversations.” Soon after he shared the post, Malaika commented, “Blurry nites (nights). Ajay Devgn and Kajol’s daughter Nysa Devgan also dropped a comment, “u (you) in the streets.”

A few days ago, Orhan shared pictures with Nysa and Mahikaa and captioned it as “I sink my teeth in disbelief” In the images, Nysa and Mahikaa are twinning in black outfits. Soon after he shared the post, Janhvi Kapoor commented, “An icon.”

In July, Orhan holidayed with Nysa and other friends across Europe. During their trip to Amsterdam, they met Janhvi Kapoor, who was shooting with Varun Dhawan for their film Bawaal. In the images, Janhvi and Orhan are twinning in red outfits. In the caption, he wrote, “When you feel so tired but you can’t sleep”

Coming back to Malaika Arora and Bhumi Pednekar, on the work front, Malaika will be next seen in a reality show revolving around her life.

Bhumi, on the other hand, will be next seen in Govinda Naam Mera with Vicky Kaushal and Kiara Advani and The Lady Killer with Arjun Kapoor.