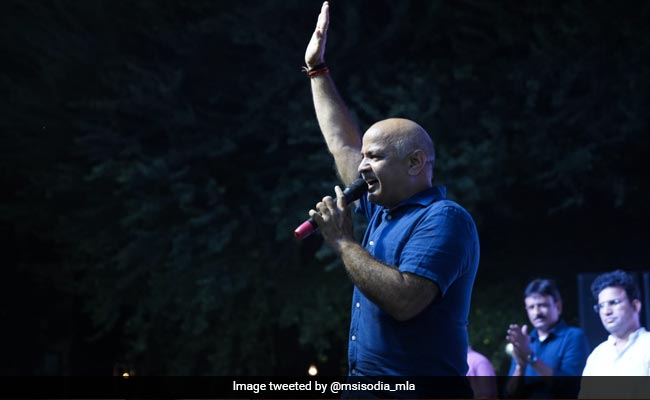 Delhi’s Deputy Chief Minister Manish Sisodia came up with a startling claim after a nine-hour questioning session by the Central Bureau of Investigation today. The officials, meant to question him on Delhi government’s controversial liquor policy, had asked him to quit the ruling Aam Aadmi Party, Mr Sisodia told reporters. They even threatened that his case can otherwise go like that of Delhi Minister Satyendar Jain, who has been in jail since May after being accused in a money laundering case, he alleged. “They will make you CM,” he quoted the officials as saying. The agency issued a prompt denial.

“CBI strongly refutes these allegations and reiterates that examination of Shri Sisodia was carried out in a professional and legal manner strictly as per the allegations against him in the FIR. The investigation of the case will continue as per law,” read a statement that came shortly after Mr Sisodia’s claims made headlines.

Reaching home after the marathon questioning session that started at noon, Mr Sisodia told reporters, “There was talk about excise policy but I was pressured to give in. ‘These cases will go on like this. They will make you CM,’ they said”.

“I told them that I find joy when a rickshaw puller’s son joins the IIT,” he said. “Today I understood that the CBI is not investigating any scam… the case against me is just meant to make Operation Lotus a success,” he added.

AAP has claimed that the BJP had tried to launch an “Operation Lotus” – toppling an opposition government by poaching on its MLAs – in Delhi and Punjab. In Delhi, the party had even tabled a  resolution against it in the assembly last month.

Sources said Mr Sisodia was questioned about the alleged involvement of liquor companies in framing of the liquor policy. The agency also had questions on allegations that the liquor firms made 12 per cent profit in the process, of which 6 per cent was routed to public servants through middlemen like Hyderabad-based businessman Abhishek Bonipally.

The other big questions were on the alleged loss to the state in the process and irregularities in bringing the policy, like cabinet clearance for the new rules after they were implemented.

In some relief to AAP, which has been bracing for Mr Sisodia’s arrest, the agency has not summoned him for a second session.

Mr Sisodia’s house was subject to multiple searches by the CBI in August after it got a go-ahead for investigation from Delhi’s Lieutenant Governor VK Saxena. The Deputy Chief Minister is the prime accused in the case, which involves alleged kickbacks to political leaders by private players in exchange for liquor shop licenses.

AAP has declared that Mr Sisodia will now be arrested in what it termed “political vendetta” of the BJP.

The BJP, AAP alleged, is “scared” about the outcome of the assembly election in Gujarat and wants to stop key leaders from campaigning in the state.

Party chief and Chief Minister Arvind Kejriwal claimed that the BJP plans to keep Mr Sisodia in jail till after the Gujarat elections. But no jail can keep his deputy in, he added. “Prison locks will break, Manish Sisodia will be free,” he tweeted in Hindi.

Earlier today, several AAP leaders, including MP Sanjay Singh, were detained after they held a massive protest against the questioning of Manish Sisodia. Around 100 leaders and workers were detained from outside the CBI office.