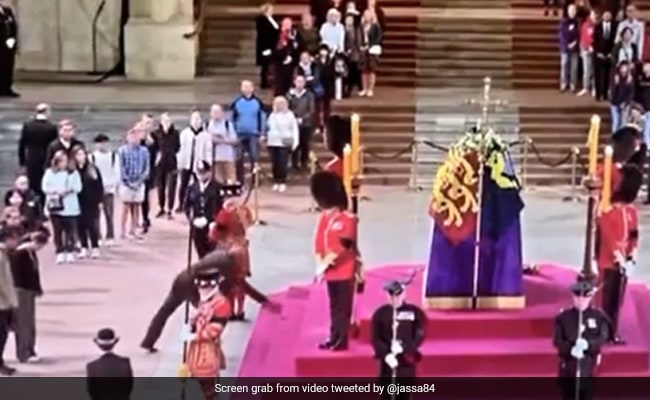 The internet was in splits after this video went viral

People from across the world paid their tributes to Queen Elizabeth II during her funeral on Monday. Britain’s longest-serving monarch died on September 8. Thousands flocked to central London to queue beside the coffin of Queen Elizabeth at Westminister Hall. The mourners, after waiting for hours paused in front of the coffin to pay their last respects. While some bowed their heads, others kneeled down to pray. Now, a video has surfaced on the internet of one of the mourners paying his last respects in a unique way.

The keen-eyed social media users posted a video of the man, which they said was a non-resident Indian (NRI), who was seen breaking the queue, folding his hands, dropping a coin, and bowing down to the queen to pay his respects. The video was posted by a Twitter user, Jassa, with a caption, “I’m so baffled, someone tell me why this LanKabooter is matha tek’ing the Queen. Someone collect their chacha.”

Check out the video here:

I’m so baffled, someone tell me why this LanKabooter is matha tek’ing the Queen.

Someone collect their chacha ffs 😂😂 pic.twitter.com/NNiNEwwdFU

The internet was in splits after this video went viral. A user wrote, “He just gave the dead queen a coin and said sasikal I’m rolling,” while another user commented, “He actually put the coin to matha tek too, Ya’ll, the Queen is accompanied by the Imperial State Crown which is decorated w the Kohinoor. She don’t need no coin, man.” “He’s hoping for langar straight after,” the third commented.

Huge crowds gathered in London to watch as the queen’s flag-draped coffin, topped with the Imperial State Crown, her orb and sceptre, was carried slowly to a gun carriage from parliament’s Westminster Hall where it had lain in state since September 14.

To the tune of pipes and drums, the gun carriage — used at every state funeral since Queen Victoria’s in 1901 — was then drawn by 142 junior enlisted sailors in the Royal Navy to Westminster Abbey.

A private burial took place late on Monday in the King George VI Memorial Chapel, conducted by the Dean of Windsor, the official website of the royal family said.

“The Queen was buried together with the Duke of Edinburgh,” a statement said, referring to her husband of 73 years Prince Philip who died last year.