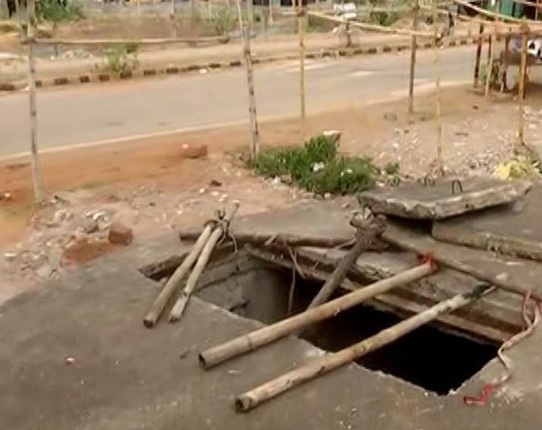 With the recent deaths of sanitation workers in Cuttack hitting headlines, the Orissa High Court took suo moto cognizance of the matter. The High Court observed that manual scavenging is a shameful practice that shocks the judicial and collective conscience, and sought details of the number of deaths of manual scavengers in the last 28 years as well as rehabilitation measures from the state government.

A few days ago, Odisha Chief Minister announced compensation for the families of two sanitation workers who lost their lives in Cuttack. The two unfortunate sanitation workers lost their lives while entering and cleaning sewerage line in the CDA locality of Cuttack. The Chief Minister’s office also ordered transfer of the concerned engineers, and registration of an FIR against the service provider. The families of the deceased were to be paid a sum of Rs10 lakh each.

Death of sanitation workers in the line of duty shocks humanity. Imagine a human being entering septic tanks and sewer lines to clean them. These sewer lines and septic tanks contain toxins like human excreta and urine mixed with soiled water. The resulting toxic gases formed on decomposition of human waste are the main reasons for sanitation workers entering these closed chambers losing their lives. Drowning in human waste is another way they can lose their life.

It is encouraging to note the swift action taken by the Chief Minister’s Office in this case. Unfortunately, such deaths are not uncommon. Just last month, two sanitation workers died in Bhubaneswar too. The plight of their families was overlooked. Hence, the National Human Rights Commission (NHRC) sought an Action Taken Report from the Odisha government on April 12. The NHRC enquired about whether the minimum legally mandated compensation of Rs10 lakh had been paid to the families. It was also concerned about whether the people responsible had been booked.

The condition across India is equally gloomy. In a recent article, Radhika Bordia and Yogesh Pawar noted that there were at least 400 such death all over India since 2013. In 2013, the Parliament passed a new law – “Prohibition of Employment as Manual Scavengers and their Rehabilitation Act”. The Act improved the previous Act of 1993, by expanding the definition of manual scavenging to include all those involved in manually cleaning, handling or disposing undecomposed human excreta. The law also codified previous court judgements of paying a compensation of Rs10 lakh per death. The responsibility of compensation is vested with the state government regardless of the employment status of the victim. The laws also require action be taken as per criminal laws against those responsible.

As sewer lines and septic tanks contain decomposed excreta, manually handling them is not considered manual scavenging under existing laws. Hence people entering and cleaning septic tanks and sewers at risk of their health, life and dignity is perfectly legal. In fact, such workers are legally called “safai karmacharis” and not Manual Scavengers. The Asian Human Rights Commission considers manual cleaning of sewer lines and septic tanks as manual scavenging too. While we may argue on the name, there should be no argument on the fact that such an occupation goes against human dignity. Multiple Indian court judgements have upheld that Article 21 of the Indian Constitution includes the Right to Life with dignity in our fundamental rights.

The existing laws only suggest that protective gear be given to people entering and cleaning sewers. In practice, a survey conducted in 2015 by Dr Shailesh Darokar of Tata Institute of Social Sciences noted that septic tanks and sewers continue to be designed only for manual cleaning. He also noted that protective equipment was rarely used, in the absence of clear specifications in existing laws.

On March 2021, Union Minister Ram Das Athavale informed Parliament that there was no proposal to make mechanised cleaning of sewer lines mandatory. Most houses in India lack access to government sanitary services and depend on their own septic tanks. Change is thus quite literally in our hands. It is the civic duty of all Indians to help phase out this inhuman occupation. By simply remodelling the septic tank of one’s house to allow mechanised cleaning, lives can be saved. Where legislation and executive action may be wanting, it is the common man who can usher change. For, it is when the people of India find such “sanitation work” intolerable and feel the need to improve the existing system, will real change occur.

In September 2020, the Chief Minister of Odisha launched the “Garima” scheme to rehabilitate manual scavengers. He dedicated a corpus fund of Rs50 crore for this purpose. Good intentions need to translate to good actions. It is equally important that all state governments and civic bodies work together with sanitary service providers and workers to phase out this occupation and rehabilitate them in other fields.

The writer is an orthopedic surgeon.