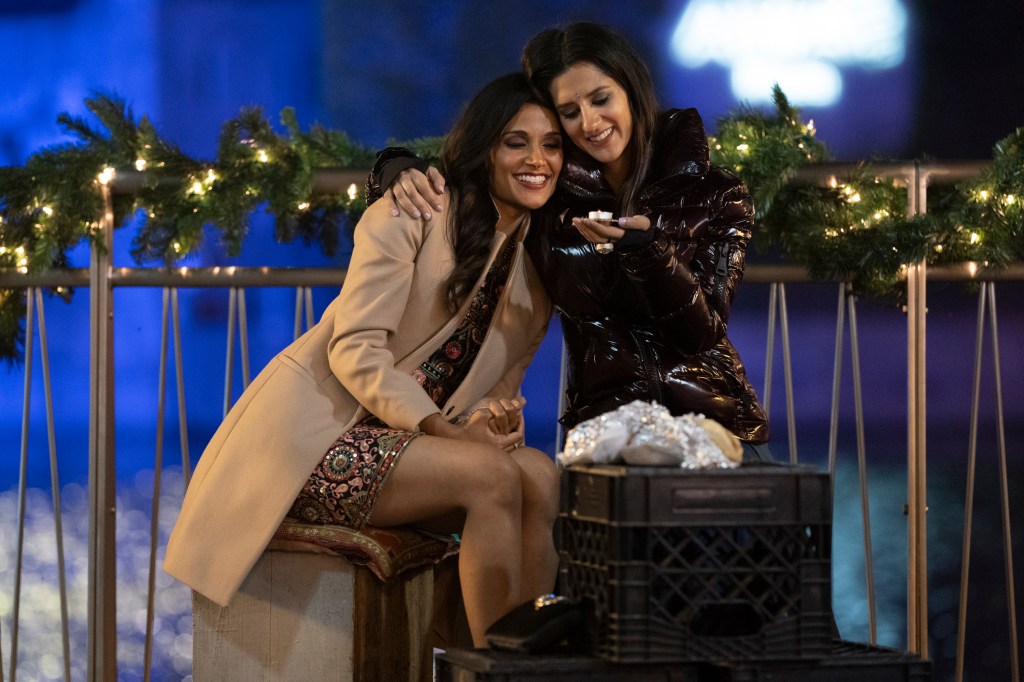 The movie special celebrates the Festival of Lights which became more widely known as “Indian Halloween,” thanks to an episode of The Office that sees Michael Scott (Steve Carrell) attend a party thrown by the parents of Mindy Kalin’s character, Kelly. But Chandra and Jindal want audiences to know the holiday is more than that.

“People have that episode of The Office to point to and say, ‘Oh, Diwali is the Indian Halloween!’ That just carries forward and we want people to know it’s more than that,” Jindal told Deadline. “It’s so funny that we have a white guy in the movie mansplaining it. It’s kind of spoon-feeding the ridiculousness of how this isn’t mainstream yet but doing it in a very digestible way.”

The pair assembled an all-star cast of their friends and connections for the film, including Chris Parnell, Tituss Burgess, Richa Moorjani, Ravi Patel, Chris Geere, Desmond Chiam, and Lilly Singh. But the collaboration that was extra special for Chandra was working with Kal Penn, an Indian American actor she admired from afar.

“Kal Penn came onboard a few years ago when Surina and I produced this short film to show the world what something like this could look like. He saw that and he reached out and offered to help us develop it,” she said. “I didn’t say this to him but I was thinking, ‘You’re my role model. I have looked up to you for so many years.’ He is one of the first Indian American actors to ever make it. He’s constantly working and taking on all these cool and iconic roles. Obviously, everyone knows him from Harold and Kumar and at the time we began talking about this, he was on Designated Survivor.”

She continued, “So I was like, ‘Yes, Kal Penn, you can join this team.’ We were so excited. Then we had the idea to also have him act in it and he was down. We just wanted him to play himself doing all the things he does but whenever the girls are in a bind, we’re going to call Kal Penn and he’s just going to be there. It’s one of my favorite aspects of the movie because it’s totally unexpected.”

While the film does celebrate Diwali, it’s not the movie’s main focus. It follows the adventures of two friends who get into some unbelievable situations during the holidays with both family, friends, and strangers alike. And many of those wild moments were taken from their real lives.

“I go to Indian parties still and it’s like, ‘Do you eat?’ That’s the first thing I’m asked,” revealed Jindal. “Or they ask if I’m married yet or if I’m successful. They want to know if we fit into these certain categories.”

One family member that sticks out from the film is Praveen Auntie, who criticizes Mel and Surina on multiple accounts. A clip from one of their interactions can be seen below.

“She’s a twist on the typical trophy aunty because of the way she has that interaction with Mel later, there’s a lot of depth to her,” Jindal shared. “That whole thing where she’s not listening to what you’re saying, thinking we’re still in college when it was possibly 10 years later, and prying into our business by asking uncomfortable questions.”

Added Chandra, “It’s one of those situations where you can’t win.”

With as much fun as the duo had making Hot Mess Holiday, they also admit to feeling pressure to represent their community in a space where their stories are still lacking. The hope is their project will help knock down barriers for more, while also just telling a hilarious and universally relatable tale of friendship.

“This is a one-of-a-kind movie in that there haven’t been two South Asian females leading a buddy comedy,” Chandra said. “On one hand, we do have that onus of representation because we have to do our community right. It is a little bit tough when you are the visibility for a niche audience that feels invisible, there’s a lot of pressure in that. But it’s still comedy first for us, and story and character first, and then, whatever informs that, then that’s great. It all really fell in line because, in the end, it’s all really authentic to who we are. Now it’s all about diaspora children really creating a community of their own. Let’s fit in together in this shared experience of feeling like we don’t fully belong anywhere.”