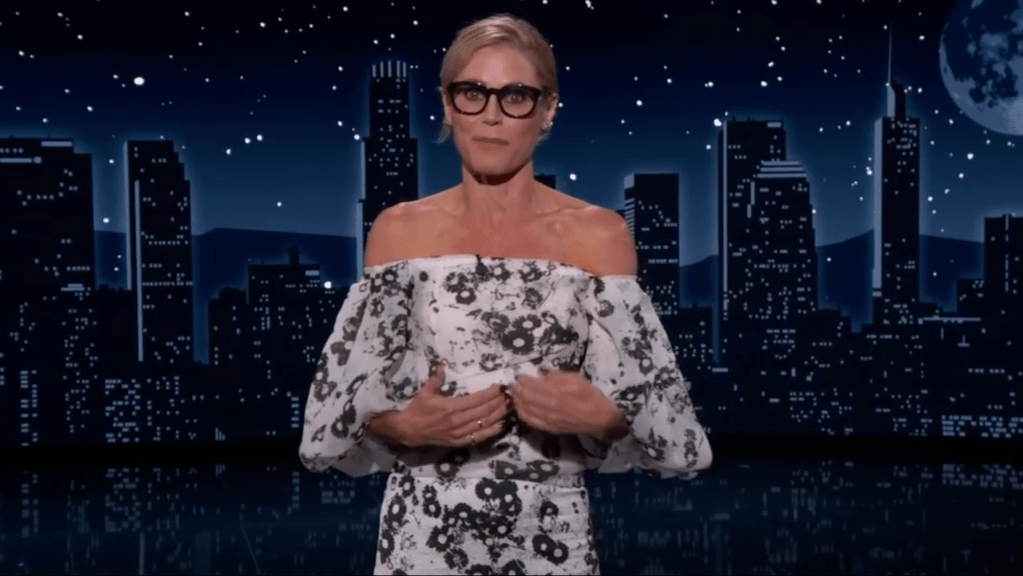 While Modern Family actress Julie Bowen has been credited with helping to rescue a woman who fainted on an August 2nd hike in Utah’s Arches National Park, she made it clear on Tuesday’s episode of Jimmy Kimmel Live! that she won’t accept it, after proving “useless” at the scene of the accident.

“Actors have little to no value here in the real word,” she said in her opening monologue, as guest host. “So…everyone helped save this woman—my sister, my twins, my knifey son—and I did nothing.”

As Bowen recalled, the woman who fainted was New Jersey’s Minnie John, who was hiking with her husband and son on a park trail when she began to feel dizzy, telling her family members to go ahead, as she sat down for a breather.

‘Days Of Our Lives: Beyond Salem’: First-Look Photos Of Peacock Limited Series

“She then fell over, hit her head and started bleeding everywhere right in front of us,” she said, joking that “it was so gross.”

Bowen came across John while hiking with her sons and her sister Annie, an infectious disease specialist who was “more than capable” of applying first aid.

“So, she goes all Meredith Grey right away, starts applying pressure and doing doctor stuff,” Bowen explained, “and I brought all my professional expertise to the table by yelling things that I’d heard on episodes of ER, like ‘Code Blue! Crash cart!’”

Bowen added that when The New York Post wrote about what happened, they said she assured John that “help was on the way.”

“Well, what that really should have said was, ‘During medical emergency, Bowen does jack sh*t,’” she said.

While Bowen was credited in media reports with tracking down John’s family, it was truthfully her 12-year-old twin boys who ran up the trail. Also getting in on the action was her knife-obsessed 14-year-old, who she equated to “an emo Crocodile Dundee.”

When John came to, she saw two women had come to help her, one of whom she recognized. “Minnie…started looking at me weird and she said, ‘Why do I know you? Are you an actress?’ and I was so embarrassed by how useless I had been, I said, ‘Yes, I am. I’m Elizabeth Banks.’ Let her take the heat,” she joked. “But then my sister told her, no, I was on Modern Family. Minnie was a fan and got very excited. She asked for a picture, even though her face was all banged up, it [looked] like we met at Fight Club.”

Bowen assured viewers that John is “totally fine now.” She also admitted that “getting recognized by somebody who has sustained a serious head injury is extremely flattering.”

Still, she couldn’t take credit for saving John, even if one TV news reporter suggested she petition for a role in the next Avengers movie.

“Yeah. The Avengers,” she said. “Because my superpower is having a sister who went to med school.”

Check out Bowen’s entire breakdown of her experience in Utah above.

Of all the topics raised during this year’s Zurich Summit, the fact that talent now sometimes favor a streaming release over a theatrical...
Read more

Saturday AM Update: Refresh for chart and more analysis As predicted, Disney-Marvel’s Shang-Chi and the Legend of the Ten Rings refused to be slow down, firmly...
Read more

Of all the topics raised during this year’s Zurich Summit, the fact that talent now sometimes favor a streaming release over a theatrical...
Read more

Saturday AM Update: Refresh for chart and more analysis As predicted, Disney-Marvel’s Shang-Chi and the Legend of the Ten Rings refused to be slow down, firmly...
Read more

Taliban Hang 4 Bodies From Cranes In Herat, Call It “Lesson” On Kidnappings

“Amazon Have Told Us The Films Will Be Theatrical” – Deadline

Many have been hoping the arrival of much-delayed Bond film No Time To Die will provide a shot in the arm to the...
Read more
Previous articleThree Former Netflix Software Engineers Charged With Insider Trading By SEC – Deadline
Next article‘Masterchef’ Renewed For Season 12 By Fox – Deadline
LocalTakSabse Tez