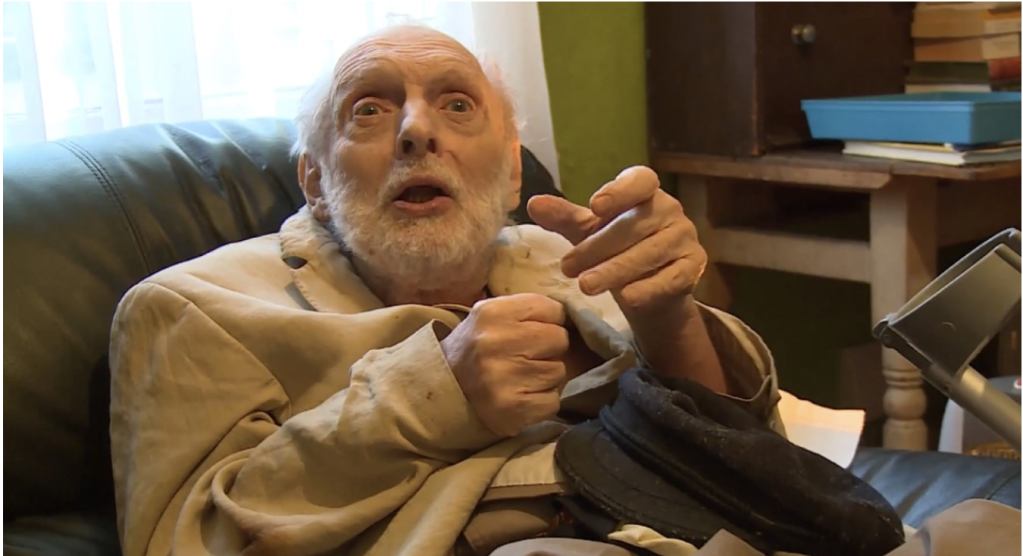 One of the biggest hits emerging at IDFA pulls off a remarkable feat: a story of an elderly man’s farewell that manages to be simultaneously touching, endearing and often riotously funny.

That sounds unlikely, if not impossible, and would be were it not for the protagonist of Much Ado About Dying – the vivacious and vexatious David Newlyn Gale. As death approached, rather more slowly than his nearest relatives expected, “Uncle David” was cared for by his nephew Simon Chambers, who filmed, wrote and directed the documentary. A good deal of the humor results from the interplay between uncle and nephew, who exasperate each other and “lovingly bicker” – if one can put it that way.

Within the first five minutes of the film, Chambers has noted in voiceover about his aging uncle, “Once I’d had to rescue him from a wardrobe when he got stuck in there looking for some socks.” He adds, “I’d spent my whole life getting him out of various scrapes.”

Chambers had relocated to Delhi, India to work on a documentary when he began to get phone calls from his uncle back home in the U.K., who complained about his deteriorating condition. “I think I may be dying,” David said in one call. Another time he declared, “I can’t go on like this… That’s why I’m in crisis.”

Chambers reluctantly suspended his work in India to return home to Britain to care for his uncle, who turned out to be in no immediate danger of kicking the bucket. David proves surprisingly resilient, and even jolly and joyful, despite living in something approaching squalor in a flat. He has smeared mint toothpaste around electrical outlets and other spots in a measure he deems efficacious to repel rodents. Heaters scorch the walls and threaten to immolate a rat’s trap of piled possessions. Yet David sings delightedly, “Life is worth living, when you’re mirth giving.”

David’s lower extremities are puffy and red, encrusted with yellowed, dead skin. Simon comments in voiceover, “Electric heaters [were] cooking his legs like meat in a kebab shop.”

Gale served in the military as a young man and then plied his trade as a thespian and educator; Chambers points out in narration, “Even when he was a teacher he liked to be the center of attention.” The director says it wasn’t his idea to begin filming his uncle.

“David was the one who suggested [filming] to me. He said… ‘You’re a filmmaker. You should bring the camera,’” Chambers recalls while ensconced in a chair on a houseboat moored in an Amsterdam canal where he’s staying during IDFA. “I had no intention of making a documentary because who wants to watch a film about some old man, right? …I just thought, I’ll film him because he’s a whole lot nicer when I’ve got the camera because he’s on show, he’s performing… We’ve got something in common that we can play [with], that is playful.”

A Google search of David Newlyn Gale turns up nothing related to the man in the film, so he must not have achieved much renown as an actor. But there are scenes in the film of Gale delivering a stunning performance as King Lear – raging as death approaches.

“The funny thing was, he was losing his memory a bit, but he could remember huge tracts of Shakespeare speeches and reel them off and play them,” Chambers tells Deadline. “Part of what I wanted to do was give David that opportunity to do his final kind of performance.”

Like the mad old king, Gale refused to listen to reason and move into a care home. He had no spouse to look after him (he spent much of his life as a closeted gay man, but came out at age 62, but never had a partner). Like untold numbers of elderly in the U.K., Gale was being cared for in an ad hoc manner by a volunteer caregiver – Chambers – with a bit of assistance from a couple of neighbors, Zibby and Biata. The documentary plays as a sort of character study and twisted buddy comedy, yet the director sees a political dimension to it.

“How do you look after all these old people? How are we going to do it? In England we’ve got a million informal, unpaid carers that don’t get anything for it [monetarily],” he says. “The documentary world, obviously it’s tied in closely with social issues, activism, politics and to varying degrees there are some that are very much like that and some that aren’t. My take is, tell people a damn good story, which is going to make them cry, make them laugh, make them moved, keep them gripped, but at the same time, don’t kind of force the politics down their throat.”

Much Ado About Dying will screen twice more at IDFA – the world’s largest documentary film festival – on Friday, Nov. 18, and Sunday, Nov. 20, after playing twice over the weekend, including its world premiere on Saturday night. The reception for the film, which is playing in International Competition, has surprised Chambers.

“When you make a film, obviously you’ve got no idea how it’s going to be perceived,” Chambers says. “This has got lots of humor in it, and it’s also got lots of sadness. It’s full of emotion… We’ve just come from a screening and it was a huge cinema — I don’t know, 3- or 400-seater — and it was pretty much [full]. But the audience, I was surprised a lot of them got to their feet at the end — I’ve not seen that in a documentary! – where they got to their feet and clapped.”

It’s an acquisition title, with not even a sales agent attached at this point.

“This film is a completely homemade project. We haven’t had any funding from anywhere,” Chambers notes. “I did a lot of the editing. I had a very good editor called Claire Ferguson who did an initial 10 weeks and then we didn’t have any more money. I was lucky enough to be a plumber before doing filmmaking. For example, the assistant editor, he needed a new bathroom, so I did his bathroom… There was a lot of bartering.”

The film could make a posthumous star of Gale, a prospect that no doubt would have delighted the aging actor. His final act, though one of advancing decrepitude, was marked in general by a lightness of spirit and cheerfulness.

Chambers remembers, “One of the things he always said was, ‘I want to carry on living until I die, I want to live as much as I can, right until I die.”