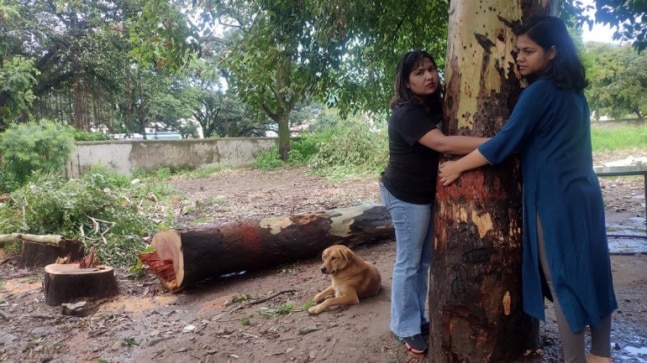 The National Green Tribunal (NGT) will hear a case on Tuesday regarding chopping down trees on the Sahastradhara Road amid protests from green activists and residents.

The petition has been listed for hearing on July 26. The petitioner said that all authorities have been informed on this matter.

On the other hand, the protestors can be seen hugging the trees to protect them from being chopped down.

According to locals, more than 500 trees have been cut down till now. While they face police harassment, protestors also alleged that fruit trees have also been cut down as they are coming in the way of expansion. Allegedly, the authorities have also marked an old Banyan tree which shelters a revered local temple. People have also cautioned against probable damage to the temple owing to the cutting down of the tree.

A video of an ambulance getting stuck following the tree felling exercise has also surfaced. The protestors levelled allegations that now even a human’s life is at stake.

Bharti, a resident of Sahastradhara road area, said that we can look at the situation of metropolitan areas where, despite having 6 lane roads the daily traffic jams continue to woe commuters everyday. How will it make a difference in a small hill capital of Uttarakhand.

Another resident of Dehradun, Saurabh, got injured after a mishap as a tree fell in front of him while he was riding a scooter. A complaint has also been filed in this matter. He alleged that authorities cannot maintain traffic at a small road, and raised questions over what they would do when it gets widened.

District Collector Sonika told India Today that they are not aware of the case hearing at NGT. “However, we will look into the mismanagement of tree felling as per the concerns raised by citizens,” she said.

India Today also tried to contact Forest Minister Subodh Uniyal, but he was unable to respond due to his ongoing tour of the constituency.

The order says that out of 2057, 1006 eucalyptus trees are to be felled by the authorities for widening of Jollygrant-Golfestate road.

The tree felling in Sahastradhara began on July 4, almost a week after the high court order allowing the cutting for “the development of communication and tourism in the state of Uttarakhand” as filed by responders in their counter affidavit.

The court also did not agree with the findings of a report that said that eucalyptus trees are good for ecology.