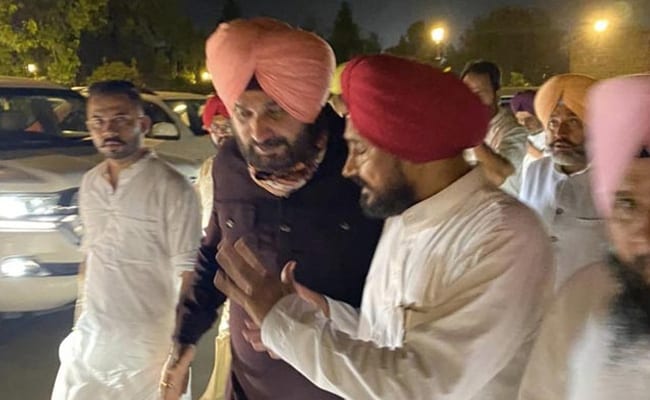 Mr Sidhu’s aide had hinted at a climb down in the morning as he said the cricketer-turned-politician “will stay Punjab Congress chief and lead the Congress in next year’s election”.

“Chief Minister has invited me for talks… will reciprocate by reaching Punjab Bhawan, Chandigarh at 3:00 PM today, he is welcome for any discussions!” – Mr Sidhu tweeted.

Chief Minister has invited me for talks … will reciprocate by reaching Punjab Bhawan, Chandigarh at 3:00 PM today, he is welcome for any discussions !

Mohammad Mustafa, adviser to Navjot Sidhu, told NDTV that the “issue will be resolved soon”.

According to him, Mr Sidhu “acts emotionally at times” and the Congress leadership understands.

Mr Sidhu, named Punjab Congress chief in July as part of a truce brokered by the party, quit on Tuesday saying he could “never compromise on Punjab’s future and the agenda for the welfare of Punjab.”

He was upset about key appointments made by new Chief Minister Charanjit Singh Channi, the man who replaced Mr Sidhu’s rival Amarinder Singh less than two weeks ago.

Mr Sidhu’s resignation was a surprise for the Gandhis; Rahul Gandhi and Priyanka Gandhi Vadra had supported him against Amarinder Singh, taking a huge political risk close to the polls.

Mr Sidhu has reportedly not spoken to the party leadership since he quit, and had earlier rebuffed Punjab leaders sent to placate him.

Yesterday, he posted a video defending his move. “My fight is issue-based and I have stood by it for a long time. I cannot compromise with my ethics, my moral authority. What I witness is a compromise with issues, agenda in Punjab. I cannot misguide the high command nor can I let them be misguided,” Mr Sidhu said in Punjabi.

Chief Minister Channi yesterday spoke to Mr Sidhu on the phone and indicated that he could reconsider some of the appointments.

“I told Sidhu that the party believes in consultations, please come and we can fix this. If anyone has any objections to any appointment, then I am not rigid on that. There is no ego tussle,” Mr Channi told reporters.