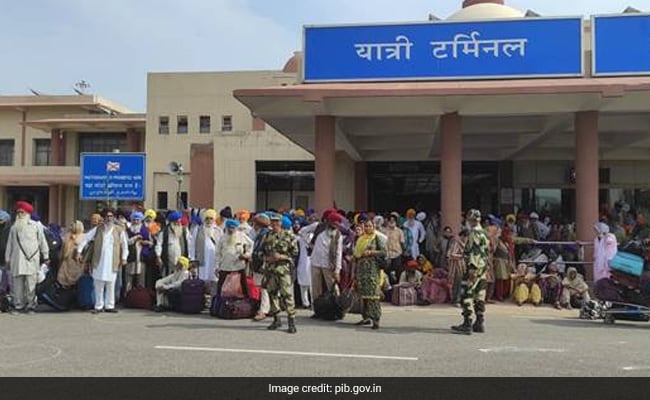 Nearly 3,000 pilgrims under the framework of the Pakistan-India Protocol on Visits to Religious Shrines of 1974 are participating in celebrations in several cities in Pakistan on the birth anniversary of Guru Nanak from November 6-15.

As per the Home Ministry records, 2,420 Indian Sikh pilgrims have travelled to Pakistan to participate in the Guru Nanak Jayanti celebrations. A total of 433 pilgrims from India visited Sri Kartarpur Sahib Gurdwara in Pakistan, through the ICP Dera Baba Nanak, Amritsar on Tuesday to offer prayers on Gurpurab.

“Several jathas of Sikh devotees crossed the Attari-Wagah border on Sunday to make the pilgrimage to Nankana Sahib in the Punjab province of Pakistan,” a senior officer told NDTV.

Gurdwara Janam Asthan, also referred to as Gurdwara Nankana Sahib, is a highly revered gurdwara at the site where the founder of Sikhism, Guru Nanak, was born.

The shrine is located in the city of Nankana Sahib, near Lahore in the Punjab province of Pakistan.

Prime Minister Shri @narendramodi has always given special importance to celebrations of Gurupurab and with the same spirit, Union Home Ministry (MHA) made all arrangements for a smooth and comfortable journey for pilgrims. (1/2)

As per the Home Ministry, the Shiromani Gurdwara Parbandhak Committee, the jatha of pilgrims paid obeisance at Gurdwara Sacha Sauda, Mandi Chuharkhana (Sheikhupura) on November 7.

On November 8, the jatha participated in the Parkash Gurpurab celebrations at Gurdwara Nankana Sahib.

On November 9, the pilgrims will depart for Gurdwara Panja Sahib at Hasan Abdal and after staying there on November 10, will reach Gurdwara Dehra Sahib, Lahore, on November 11, the official said.

Pilgrims who visited Sri Kartarpur Sahib Gurdwara included 429 Indian nationals and four overseas citizenship of India, or OCI, cardholders. All the pilgrims have returned after offering their prayers.

“Prime Minister Narendra Modi has always given special importance to the celebrations of Gurpurab and with the same spirit and the Home Ministry made all arrangements for a smooth and comfortable journey for the pilgrims,” the Home Ministry said in a statement.